Leyte Farmers Locked in Battle with Ex-CA Justice Over Land

MANILA – Alejandro Abaño, 54, joined the recent Nationwide Peasant Caravan for Land and Justice with high hopes that the government would hear his plea.

Since 2000, Abaño could not go back to his farm in barangay Cabatianuhan, Alangalang, Leyte. In the first week of February that year, Abaño, together with some agricultural workers, was weeding the coconut land of his father when armed men pretending to be policemen came to their hut accusing them of being rebels. The men poked their guns at Abaño and his companions and took their pictures. 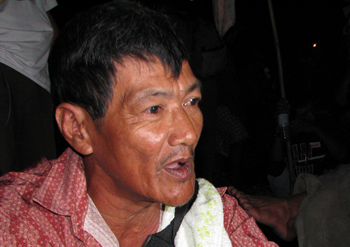 The men told Abaño to let her mother, Ines, come and show documents to prove that the land was hers, but Abaño told her mother not to go as she might be killed. Fearing for his life, Abaño stopped going to his farm and instead assigned an overseer.

On March 1, 2001, Manuel Nuñes, one of the armed men, came and told the overseer not to plant coconuts anymore in Abaño’s land. The armed men were allegedly hired by former Court of Appeals Justice Vicente “Cheng” Veloso who claimed that he owned the land.

“I grew up tilling the land and so did my parents,” Abaño said in Filipino in an interview with Bulatlat. “Veloso has grabbed our land and that of other farmers,” he said. Abaño is among the 144 farmers who have been ejected from a 429-hectare of agricultural land in the tri-boundary of Alangalang, Tacloban and San Miguel in Leyte. 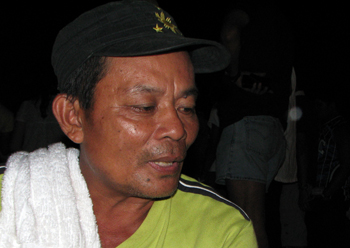 Research by Sagupa-SB shows that farmers cultivated the land since 1930s. During martial law, the land had been covered by Leyte Sab-a Basin by virtue of Presidential Decree 625. With the aim of “developing a food basket within the province of Leyte and Region VIII by increasing agricultural productivity,” the Leyte Sab-a Basin Development Authority (LSBDA) managed the land since 1974.

LSBDA was granted Special Patent No. 3412 covering the areas from the municipalities of Jaro, Alangalang, Sta. Fe, Palo, Barugo, Babatngon, San Miguel and the city of Tacloban, with an area of 3,000 hectares. Agrarian-reform beneficiaries were identified in the areas of LSBDA. About 8,648 hectares were turned over by LSBDA to DAR.

During the Corazon Aquino administration, the land was covered by the Comprehensive Agrarian Reform Program (CARP) .

“In 1991, we got our CLOA (certificate of land ownership award) but they were canceled by DAR (Department of Agrarian Reform) in 2001,” Abaño said.

In 1997, Veloso arrived in the area to supply timbers for the National Power Corporation (Napocor). He then obtained land titles for his family and relatives. 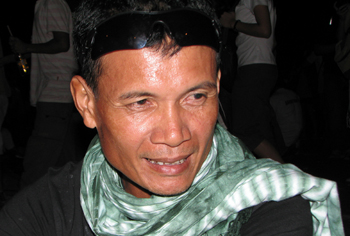 In 2002, the Department of Agrarian Reform Adjudication Board (Darab) decided in favor of Veloso, taking away the land from the farmers not only in Alangalang but also in nearby towns.

Sagupa-SB said that since 2008, Veloso hired more goons. This was followed by deployment of the Regional Mobile Group (RMG) of the Philippine National Police and 19th Infantry Battalion of the Philippine Army to the contested areas.

In October last year, the Sagupa-SB conducted a National Fact-finding Mission together with KMP, Anakpawis Partylist ang Bayan Muna. Anakpawis congressman and KMP chairman Rafael Mariano and Bayan Muna Rep. Teddy Casiño joined the mission. Delegates of the mission held dialogues with DAR Region 8 and other government agencies and found no evidence to prove that Veloso owns the land. DAR officials said they would conduct an investigation but, to this day, no such thing happened.