A Bloody Struggle for Land in Compostela Valley

For the farmers, peasants and indigenous peoples of Southern Mindanao, the past several years had been a period of great danger and violence as big mining companies encroach into ancestral and agricultural land, using the military to drive them away. Many peasant and Lumad leaders who opposed these projects have ended up dead and tortured. 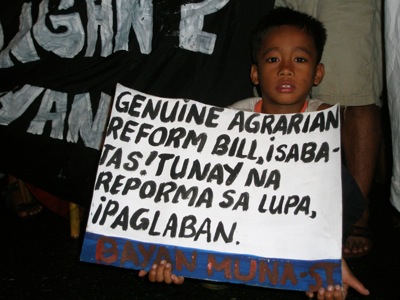 MANILA — For the farmers, peasants and indigenous peoples of Southern Mindanao, the past several years had been a period of great danger and violence.

During the recent Lakbayan, a national peasant caravan that brought farmers and peasants from all over the country to Mendiola to commemorate the 23rd anniversary of the Mendiola Massacre, farmers from the Southern Mindanao region reminded everybody of the bloody history of the struggle of Lumads in Compostela Valley province for over 92,000 hectares of ancestral domain.

The Lumads had been promised several times through dialogues with public officials that they would live in peace in their domain, which means no soldiers nor police officers should harass them. But these, they said, are nothing but empty promises.

On May 14, 2008, peasants from Barangay Ngan in Compostela Valley had a dialogue with Governor Arturo Uy at the provincial capitol after the 28th Infantry Batallion of the Philippine Army figured in an armed encounter with the New People’s Army, the armed wing of the Communist Party of the Philippines, the day before. The peasants said elements of the 28th IB had militarized their community to avenge their defeat, believing they were supporters of the NPA.

In an interview with Jimmy Saypan, spokesman of Kilusang Magbubukid ng Pilipinas in Southern Mindanao Region, peasants were suffocated with plastic bags, kicked and were even threatened that they would be killed unless they promise never to support the NPA.
“Even our barangay captain was threatened by members of the military, that they would hang him in front of our village if he cannot control his constituents from supporting the NPA,” Saypan said.

Some 57 Lumad families fled from their land the day after the encounter, afraid that the military exact revenge on them. They evacuated to Bankerohan Gym in Davao City. Hopoing to address the problems that the displaced Lumads were facing, Celso Pojas, then spokesman of the Farmer’s Association in Davao City (FADC) was about to visit them when he was gunned down in the morning of May 15, 2008, in front of the FADC office.

Another dialogue took place between the public officials of Compostela Valley and the Lumads on June 17. Again, they were promised that the military would no longer harass their community and would no longer red-bait them as members or supporters of the NPA. “But none of these came true,” Saypan told Bulatlat.

Ruel Dutarok and Isabelo Celing, peasants who are supporting the cause of KMP and other peasant groups against the militarization, were gunned down before 2008 ended. The following year, more political killings were recorded. Danilo Qualbar, a member of FADC and Bayan Muna municipal coordinator, was killed allegedly by members of the 66th IB on Nov. 6, 2009. It was closely followed by the killing of Conrado Canete on November 28.

On December 23, Fernando Sarmiento, secretary general of Panalipdan-Southern Mindanao Region, died from five gunshot fired by unidentified men at around 7:30 in the morning. Sarmiento was known in New Bataan, Compostela Valley, for calling for a stop to the operations of Philco Mining Corporation, the planned exploration of other mining corporations and the mining-instigated military operations of the 10th IB.

Aside from these killings were cases of torture and illegal arrests. On December 3 and 4, three Lumads from Sitio Calinugan, Barangay Casoon in Monkayo town were illegally arrested, tortured and interrogated by state agents. They were Pelition Awad, 42, Antolino Oyboy, 39, and Crispon Tompong 44, who were accused by the military as NPA supporters.

“This is how the present administration works. If President Gloria Arroyo’s projects cannot enter a community that opposes it, they deploy members of the military to drive us away,” Saypan said.

Even Saypan was a victim. He said he was repeatedly harassed by members of the military in his very own home, threatening that he would be killed next unless he would stop launching campaigns against militarization. “They told me that among the many people in our village, I was the one to lead campaigns against them. So I have to be killed,” Saysan said, “But even if they would kill me, I know that the struggle of my fellow peasants would not cease.”

Saypan said that in order to bring peace in their land, the present administration should prioritize the passing of the House Bill 3059 or the Genuine Agrarian Reform Bill, authored by the late Anakpawis Rep. Crispin Beltran. The bill recognizes the peasants as rightful owners of the land that they are tilling and should therefore be given to them for free. “We should scrap Carper, the fake agrarian reform program of the government that has caused the peasants nothing but our worsened conditions,” Saypan said.

The peasant leader also higlighted the scrapping of the Mining Act of 1995, which has given way to multinational companies to explore and operate mining activities in ancestral domains. Saypan said while they have a Minahang Bayan in Compostela Valley that would allow small-scale mining among their constituents, their activities are incomparable to the destructive effects of large-scale mining by multinational companies. “We will not benefit from them,” Saypan said. (Bulatlat.com)