FQS: A Look Back at Those Days of Disquiet

“The First Quarter Storm of 1970 caught the attention of the people on a national and international scale. It inspired the youth and working people in the provincial capitals and cities to rise up and carry out protest actions against US imperialism and the local reactionaries and demand national liberation and democracy.”

MANILA — Forty years ago on Jan. 26, a storm unleashed itself and descended upon the country. It would thereafter be known as the First Quarter Storm, or FQS, of 1970 and would be considered one of the pivotal events in Philippine history, particularly that of the protest movement.

Just barely a couple of months before, the would-be dictator Ferdinand Marcos had been elected to his second presidential term, soundly trouncing his opponent Sergio Osmeña Jr. amid widespread allegations of fraud and violence.

One of the first measures the Marcos regime had undertaken at the onset of 1970 was the imposition of a decree devaluing the peso, from P3 to the $1 to $1:6 — in other words, reducing the peso’s worth by half. This had the effect of increasing the value of investments by foreign corporations, chiefly US companies, while at the same time increasing the prices of basic commodities and making life more difficult for the majority of the population whose incomes were not rising.

Adding insult to these injuries, graft and corruption were particularly thriving at all levels of government. The provinces reeled from the violence perpetrated by warlord clans not only upon their political rivals, but also against the local populace. 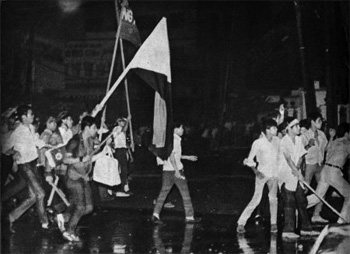 A scene during the protests. (Photo from http://fqslibrary.wordpress.com)

“Corruption had become a way of life, and poverty was manifested in the daily lives of the people,” said Bonifacio Ilagan, a veteran of the FQS and now chairman of the First Quarter Storm Movement (FQSM). “Also, the rule of the elite, of only a few families, was very apparent,” Ilagan added.

Apart from these, students and the progressive sections of the intelligentsia were up in arms over the Marcos regime’s support for the United States’ war against the national-liberation movement in Vietnam.

Clearly, the overall socio-political situation in the Philippines was just waiting to explode.

And the first explosion took place on Jan. 26, 1970. Marcos was delivering his State of the Nation Address (Sona) in the old Congress building in Manila, which now houses the National Museum. Outside, a crowd of some 50,000 — most of them students and community youths — had assembled. As Marcos stepped out of the building after delivering his speech, the demonstrators threw a papier-mache symbolizing the rapacity of the socio-economic elite and their politician-henchmen, and a papier-mache coffin representing the death of democracy.

All of a sudden, the police were upon the demonstrators with their truncheons and shields, relentlessly chasing them all the way along Taft Avenue. The mayhem lasted until close to midnight. Many protesters were severely injured and scores were arrested and detained.

Four days later, the protesters were back with a vengeance, this time, in front of Malacañang in protest against the violence of Jan. 26. The demonstrators — again, mostly students and community youths — were hosed down, hit with truncheons and shields, tear-gassed, and even fired at, but they stood their ground. The fighting went on until the wee hours of Jan. 31. By then, four of the protesters — students Ricardo Alcantara, Fernando Catabay, Felicisimo Roldan, and Juan Tausa — had been killed, and hundreds of others had been hurt and arrested.

The rallies of Jan. 26 and 30 did not daunt the activists and their allies. As Ilagan put it, it was a period when “there were demonstrations almost every day.”

From week to week, the level of “propaganda and agitation, organizational work and mass mobilization rose,” said Jose Maria Sison, founding chairman of the Kabataang Makabayan (KM or Patriotic Youth), one of the organizations that figured prominently in the FQS. “Fifty thousand to 100,000 joined each of the marches and rallies, while other people lined the streets to cheer the marchers and give food and water to them. The columns of marchers converged on plazas near the presidential palace or the US Embassy.”

Forty years after it burst upon the country, the FQS remains one of the most significant events in history.

“The First Quarter Storm of 1970 caught the attention of the people on a national and international scale. It inspired the youth and working people in the provincial capitals and cities to rise up and carry out protest actions against US imperialism and the local reactionaries and demand national liberation and democracy,” Sison said.

“The First Quarter Storm of 1970 was the highest point of the legal democratic mass movement for national liberation and democracy before the suspension of the writ of habeas corpus in 1971 and the declaration of martial law in 1972. It put forward the patriotic and progressive demands of the people against US imperialism and the local exploiting classes.”

“We should never forget the First Quarter Storm of 1970 as a major node in the development of the new democratic revolution in the Philippines,” Sison added. “The achievements of the Philippine revolution since 1970 would not have been possible without this storm. We owe to it the emergence and development of so many cadres and mass activists and the growth of the revolutionary forces on a nationwide scale.

For Ilagan, the FQS was a series of events that “altered the course of history. The First Quarter Storm was a large school of theory and practice for an entire generation of Filipino youth… (It brought about a surge) in arousal and organization (of the masses).”

Sison underscored the “great significance and continuing relevance” of the FQS, especially at a time when “the broad masses of the people suffer conditions of exploitation and oppression far worse than four decades ago.”

This year’s commemoration of the FQS anniversary kicked off last Jan. 26 at the Bustillos Plaza in Sampaloc, Manila, with the unveiling of a marker for the late student activist-turned-revolutionary underground leader Edgar Jopson. The marker was constructed in front of what used to be the Jopson Supermarket.

The unveiling of the marker for Jopson was attended by his sisters Ma. Zenaida and Maria Rosanna, as well as by a number of his nephews and nieces, members of the FQSM, and employees of the Manila City Hall. Presiding over the unveiling was Manila Mayor Alfredo Lim. (Bulatlat.com)