‘Mrs. B’: A Monologue About the Agony and Struggle of a Mother of a Desaparecido

MANILA — “Mrs. B” is a monologue about the life of Edita Tronqued Burgos, mother of missing activist Jonas Joseph and wife of the late press-freedom fighter Jose B. Burgos.

Jonas was abducted by five men and a woman inside the Ever Gotesco in Commonwealth, Quezon City, on April 28, 2007. Jonas was held by the hands and feet as he was being dragged out of the mall. He was shouting: “Aktibista lang po ako!” (I am just an activist.)

One of the witnesses, a security guard, testified in court that the license plate used in the get-away vehicle is TAB 194, which was later traced to another vehicle that was impounded at the 56th Infantry Battalion camp in Bulacan. A member of the Alyansa ng Magsasaka sa Bulacan, Jonas was accused by the military as a member of New People’s Army.

Despite damning evidence and a Supreme Court decision ordering the Armed Forces of the Philippines (AFP) to produce Jonas, military officials repeatedly deny they have the activist. Jonas remains missing to this day and no one has been prosecuted for the crime. In fact, in June last year, soldiers implicated in Jonas’s abduction namely Noel Clement, Melquiades Feliciano and Edison Caga were promoted to colonel by President Gloria Macapagal-Arroyo. 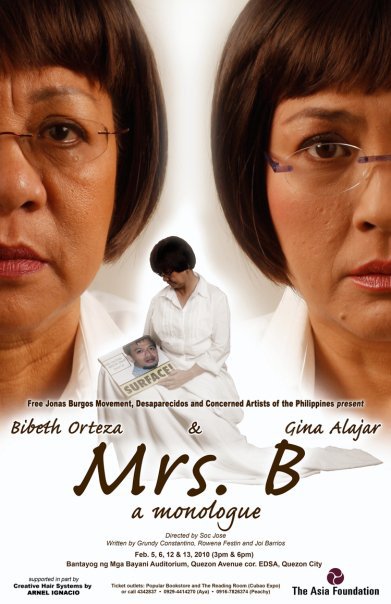 Written by Palanca awardees Joi Barrios-Leblanc and Rowena Festin and Concerned Artists of the Philippines (CAP) member Grundy Constantino and directed by Socrates Jose, “Mrs. B” depicts the agony and courage of a mother searching for her son. With award-winning actresses Bibeth Orteza and Gina Alajar playing the role of Mrs. Burgos, even the desensitized and the unaware would be moved into tears. Although the two actors have different approaches in portraying Mrs. Burgos, both are so intense and so good that their performances are incomparable.

Even Jose was deeply affected during the rehearsals last Tuesday,“Nangingilabot ako.”

“The script is based on facts,” Mrs. Burgos told Bulatlat in an interview. The monologue is rich with anecdotes about Jonas and his close-knit relationship with his family, giving a face for the thousands of victims of enforced disappearances in the country.

As the story progresses, Mrs. Burgos will also find her other self — a transformation that binds her, in a more profound way, to her missing son.

The end of the monologue could not be more than fitting, a solemn pledge to seek justice.

“I cannot thank the Lord enough for this,” Mrs. Burgos said. “I am overwhelmed by [the performances of] Bibeth and Gina. Both of them are really good, I feel that I don’t deserve this.”

“They have the heart for it. They don’t just act it out, they feel it,” she said of Orteza and Alajar. Mrs. Burgos and Orteza are both members of Pagbabago!, a broad alliance working for genuine change.

Mrs. Burgos said the monologue will make the people remember the case of Jonas who has been missing for almost three years already. Despite limited resources, Mrs. Burgos thanks the CAP, Desaparecidos and all those involved for making the project possible.

Now president of Desaparecidos, Mrs. Burgos vowed to continue the fight until the last victim of enforced disappearances would have been found.