Lack of Human Resources for Health

CBHPs and medical volunteers play a crucial role in the Philippines where there has been a noticeable trend of outward migration of doctors, nurses, midwives, therapists, and other medical professionals. From 1992 to 2006, the country has already deployed 115,871 professional nurses as overseas Filipino workers (OFWs); 2,945 professional midwives; and 1,247 medical doctors. The Philippines is the biggest “exporter” of nurses in the world. 7 The Philippine General Hospital (PGH) alone is losing as much as 500 nurses every year out of their 2,000 health workforce.8

These exported medical professionals tend to be well-trained, skilled, and experienced because of their specializations but are enticed to go abroad mainly due to economic factors. Nurses in the Philippines, for instance, are volunteers or casuals without plantilla positions and thus do not enjoy job security and other benefits. The Philippines has been mass producing nursing graduates every year not to attend to domestic health demands. A 2000 estimate, for example, said that 85 percent of the total demand for Filipino nurses are found abroad. Health workers employed in the country, meanwhile, endure low and variable wage rates that do not allow them to earn decent living wages.9 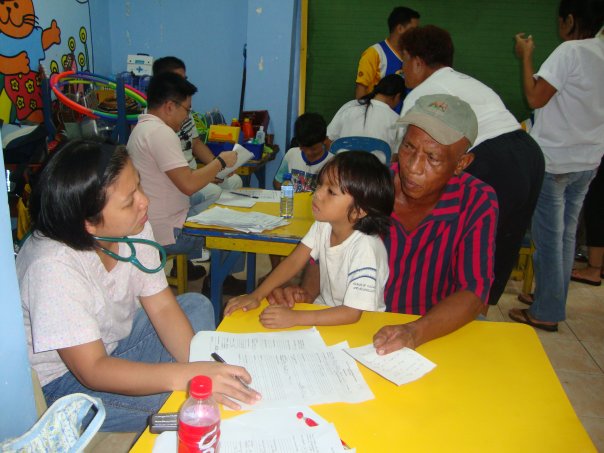 The obvious and immediate end-result of this phenomenon is a shortage in health professionals to meet the country’s own requirements. One indicator is the health professional to patient ratio. In some hospitals, one nurse attends to as much as 60 patients 10, which have implications on the quality of health services. A separate report claimed that the nurse to patient ratio in some government hospitals in the Philippines even reached 1:100 while the international standard is pegged at only 1:4.11

Meanwhile, processed data from the World Health Organization’s (WHO) online database show that there is only one doctor for every 2,000 Filipinos and one nurse/midwife for every 167. The WHO said that countries with fewer than 2.5 health care professionals (physicians, nurses, and midwives) per 1,000 people failed to achieve adequate coverage rates for selected primary health care interventions as prioritized by the Millennium Development Goals (MDGs) framework.12

Consequently, the 2007 Philippines Midterm Progress Report on the MDGs shows that based on the country’s current pace, the 2015 deadline on health-related targets will not be achieved. As of 2006, the number of maternal deaths per 100,000 live births was pegged at 162. The MDG target is to reduce the maternal mortality ratio to 52. Meanwhile, access to reproductive health care was pegged at 50.6 percent while the UN goal is 80 percent access.13 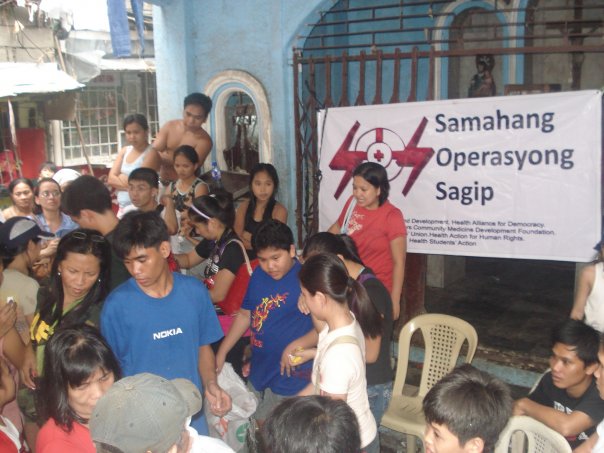 One of the medical missions organized by community health groups. (Photo courtesy of CHD)

The exodus of Filipino health professionals is reflective of the backward state of the Philippine economy and aggravated by wrong policies and priorities of past and present governments. The export of labor including medical professionals has been a flawed government policy since the Marcos years to provide jobs and generate dollars for the economy. In recent years, government has even intensified the export of health workers such as through the 2008 ratification the Japan-Philippines Economic Partnership Agreement (JPEPA), which supposedly guarantees access for Filipino nurses and caregivers to the Japanese health labor market.

These policies combine with total government neglect to provide basic social services including health. At an average of 1.8 percent national budget allocation since 2001, the Arroyo administration has allocated the smallest portion of the country’s budget for health services among all post-Marcos governments.14 Actual spending is even worse. In 2008 (latest available data), public spending for health comprised only 1.2 percent of total spending (while debt servicing for principal and interest accounted for 47.6 percent).

Lack of public health services has forced many Filipinos to rely on their own. In a 2009 survey, Sun Life of Canada found out that 76 percent of Filipinos are concerned about paying for health treatment and an overwhelming 85 percent rely on their own savings when they get sick.15 But because of poverty, medical needs are largely not met as indicated by the alarming national health statistics

Official poverty statistics show that there are 27.6 million poor Filipinos or 32.9 percent of the total population,16 although independent estimates such as IBON’s claim that as high as 8 to 9 out of every 10 Filipinos do not meet decent living standards.