You Are Here: Home → 2010 → February → 22 → Jane Balleta: Compassionate Epileptic Is Source of Her Family’s Strength, Pride

MANILA — Jane Balleta, who is known for her sweet smile, humility and as a dependable, one-text-away friend, was among the 43 health workers abducted and tortured by the military on Feb. 6. Her family was outraged over Jane’s plight but has never lost confidence in her ability to deal positively with her predicament.

As her mother, Ofel Beltran-Balleta, described her, Jane is not the type who will lose hope or be depressed because she knows how to handle any kind of situation. In fact, Jane told them not to worry. But like all mothers in her situation, Mrs. Balleta was understandably anxious, especially after learning that Jane had been blindfolded and handcuffed for 36 hours and had been sexually harassed. 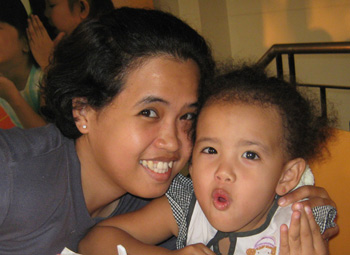 Jane with her daughter Trixie (Photo courtesy of the Balleta family)

But Jane was born with a positive point of view. “Jane is the type of person who would always smile even if she has problems,” Mrs. Balleta said. “Whenever I have a problem, she would always say, ‘You can handle it, Ma.’ That is why despite what they are going through she is always smiling and her morale is high. It’s as if we the relatives are the ones in jail.”

Jane started her community health work in 2001 when she was still studying sociology at the Polytechnic University of the Philippines. “She was with Gabriela Youth then. But because of her interest in health work, she occasionally joined medical missions and the outreach program of the Council for Health and Development (CHD).”

Because of her determination and willingness to do health work to serve the marginalized sectors living in remote sitios and barangays, Jane attended trainings on health to hone her skills. She even became the “attending physician” of her grandmother, Ka Osang Beltran, wife of the late Anakpawis Rep. Crispin Beltran. “She stayed with her grandmother for one week to personally monitor her health because she did not want to go to the doctor. Jane strictly monitored her grandmother’s sugar intake, blood pressure and diet until she got better. Mama had an irritation in her legs and Jane taught her how to clean the rashes and now it’s gone,” Mrs. Balleta narrated. Jane was able to convince Ka Osang to undergo acupuncture even if Ka Osang is scared of needles. 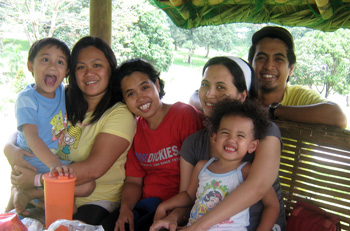 Jane with family members and friends. (Photo courtesy of the Balleta family)

“Jane was a big help to our family,” Mrs. Balleta continued. “She helped my mother and those who live in farflung areas. She helped them a lot and taught them alongside doctors and nurses. If only the military would open its eyes to the great help community health workers like Jane are doing to the poor, they would be ashamed of themselves.”

Jane was diagnosed with mild epilepsy after her pregnancy with daughter Trixie in 2008. When the news of their abduction reached the family, they were naturally worried.

According to Mrs. Balleta, Jane felt conscious whenever she experienced attacks. But this did not stop her from doing community health work. Her epilepsy was never a hindrance to whatever she wanted to do. Mrs. Balleta never advised her daughter to stop despite her illness, “She told me she could handle it for as long as she has her medicines with her.”

When asked if Jane had an attack during their 36-hour ordeal, Mrs. Balleta related Jane almost had one.She quoted Jane saying, “Ma, I really had a difficult time enduring the torture. I was scared of being raped because every time we went to the bathroom there was a soldier with us. We don’t even know who is looking at us when we go there.”