MANILA — The Armed Forces of the Philippines (AFP) defied the constitutional mandate of the Commission on Human Rights (CHR) as it refused to produce the 43 health workers before the commission during a hearing today.

The AFP, in a manifestation sent to the CHR yesterday, said that the commission should first get clearance from Regional Trial Court (RTC) and Municipal Trial Court in Morong before the AFP could produce the detainees.

The 43 health workers were arrested February 6 at a farm house in Morong, Rizal. The military claimed the health workers are members of the New People’s Army (NPA). 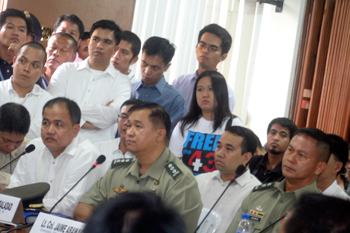 The Morong 43 hearing at the CHR was jampacked. (Photo by Ayi S. Muallam / bulatlat.com)

Charges of illegal possession of firearms and explosives have been filed against the Morong 43 in the said courts.

State Prosecutor II Romeo Senson states that according to the prevailing jurisprudence, the trial courts should have jurisdiction over the case.

Senson is also named respondent to the complaint as he was the one who subjected the Morong 43 to inquest proceedings without the presence of lawyers.

“Are you saying the CHR is in danger of violating of the sub judice rule?” CHR chairwoman Leila de Lima asked Senson.

“It’s the law; the trial courts have exclusive jurisdiction over the accused,” Senson insisted.

“You may be following the law but you are misconstruing the CHR,” de Lima said, adding that the CHR has the constitutional mandate to investigate allegations of human-right violations.

De Lima said that in the case of Morong 43, there are allegations of illegal arrest, illegal detention, torture, incommunicado detention, violation of the right to legal counsel, among others.

CHR Commissioner Cecilia Quisumbing even read aloud the judicial powers of the CHR as stated in the 1987 Philippine Constitution.

“We will continue with this proceeding because we have the mandate of the Constitution,” de Lima said.

Atty. Ser-me Ayuyao, counsel for military respondents, insisted that the complainants should prove their allegations first. He then invoked the right of the military against self-incrimination. 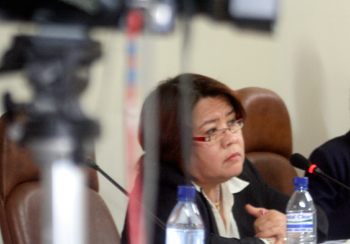 But De Lima said the AFP cannot invoke the right against self-incrimination yet. “This is not a court of law, it is a fact-finding body. We need to clarify facts,” de Lima said.

When Ayuyao asserted the respondents’ right to remain silent, De Lima said: “Do not restrict our authority to determine the truth.”

Quisumbing said respondents are not defendants at the CHR hearing and the commission can adopt its own proceeding.

Atty. Romeo Capulong of the Public Interest law Center (PILC), lead counsel of the Morong 43, said there is no valid reason for the AFP not to bring the 43 detainees at today’s hearing.

“The CHR powers cannot be subordinated by any court in this country,” Capulong said. “It is not true that the Morong courts have jurisdiction over the Morong 43.”

Capulong said they have questioned the legality of the arrest and detention in their petition before the Court of Appeals (CA) and submitted an appeal after the CA junked their plea.