Col. Aurelio Balabad, commander of the 202nd Infantry Brigade of the Philippine Army, admitted he did not see the search warrant before they provided support to the Philippine National Police’s operation on February 6.

“The search warrant is not with us… I’m not competent really [to answer the question about the search warrant],” Balabad said. “It was a tactical decision at the level of the battalion commander,” he said.

Balabad said he received information from an intelligence unit of the AFP that there were NPA rebels in the area.

“There is ambiguity here. The search warrant is against Mario Condes and you were talking about NPA rebels,” De Lima said.

Lt. Col. Jaime Abawag, commander of the 16th Infantry Battalion, said he saw the search warrant on Feb. 5, a day before the operation. Police Superintendent Marlon Balonglong presented it to him, Abawag said.

When De Lima asked about the details of the search warrant, Abawag said they were there to provide support and the PNP was in charge.

After the AFP, it was the turn of the PNP to be grilled by the commissioners. 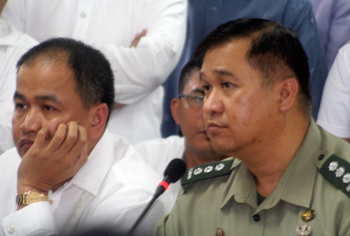 The military insists that the CHR has no right to hear the case. (Photo by Ayi S. Muallam / bulatlat.com)

P/Supt. Marion Balonglog of the Rizal Provincial Police told the commission that he personally applied for the search warrant for a certain Mario Condes, the only name in the warrant used for the Feb. 6 operation.

Balonglong said he applied for the warrant after his men’s “social investigatio”n and surveillance on the house where Condes supposedly stayed, which the military later said was the house of Dr. Melecia Velmonte, a medical doctor and professor emeritus at the UP College of Medicine. Balonglong said that about 30-40 individuals were going in and out of the house and that they were suspected of having firearms.

“We have information that there are people getting in and out of the compound,” Balonglong said.

When asked why he applied for the warrant in Imus, Cavite, Balonglong could not sufficiently answer the commissioners.

He admitted that Mario Condes was not present at the farm house during the arrest. Atty. Argee Guevarra, counsel of Dr. Velmonte, told the body that Dr. Velmonte did not know a Mario Condes.

Balonglong said the basis for the warrant for Condes was the complaint the police received against him for having firearms and for being a troublemaker.

Commissioner Cecilia Quisumbing asked Balonglong if therewere any complaint filed against Mario Condes by the supposed informant and Balolong said there were none and that there was no official police record. He said they also failed to get even the address of the informant/complainant when he filed his complaint against Condes on Feb. 3. “It would be helpful for you to find out if that informant is only fooling you,” Quisumbing told Balonglong.

Balonglong said they asked for the support of the AFP because of the information that there were about 30-40 suspected NPAs in the compound.

When asked why did they not take the detainees to Camp Crame or in Camp Geronimo, both police camps, Balonglong said those camps have no facility that can accommodate 30 to 40 detainees. When asked by Quisumbing what was so special about the 43 that they could not be transfered to another detention center, Balonglong answered: “I’m not incompetent to answer that, your honor.” 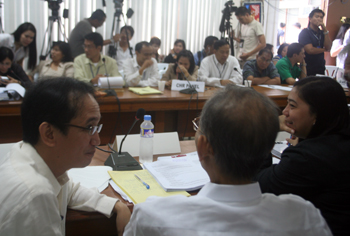 The lawyers for the Morong 43. (Photo by Ayi S. Muallam / bulatlat.com)

Quisumbing asked Balonglong if they are still looking for Condes and Balonglong replied that they are not. He described the operation, however, as a success regardless of the fact that the original objective of the warrant is the capture of Mario Condes.

Lawyers of the Morong 43 will question the recent appointment of Bangit as the new chief of the AFP.

The PILC and the National Union of People’s Lawyers (NUPL) said in a statement today that they will block the interim appointment of Bangit.

Bangit was the commanding general of the Philippine Army at the time the complaint was filed. The Morong 43 decried interrogation, torture, and violations to their rights to counsel and to due process.

“As then army commander and now AFP chief, he is as guilty under the principle of command responsibility as his subordinates in trampling on the constitutional rights of the 43 victims,” Capulong said.

Capulong said they will invoke the memorandum of agreement between the CHR and the AFP and PNP requiring members of the military and police up for appointment in key government positions to secure clearance from the CHR.

“We will also block any intended appointment to civilian posts of other respondents,” Capulong said. (Bulatlat.com)