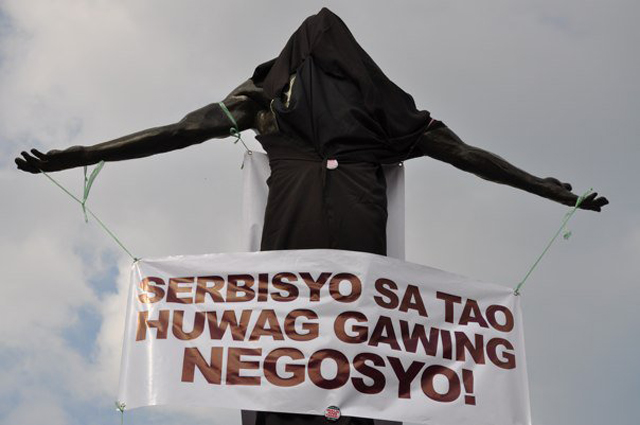 MANILA — The crisis at the Philippine General Hospital worsened last week as 75 of the hospital’s topnotch and highly qualified doctors and medical professors went on mass leave starting March 29 to express “anger and dismay over the oppression and dubious removal from office” of the hospital’s director, Dr. Jose Gonzales, and to “strongly protest the lack of democratic process” in selecting the PGH director.

The mass leave, organizers of the protest said, is unusual and unprecedented in the history of the hospital. As the court is expected to decide on the legality of Dr. Gonzales’s removal sometime mid-April, the doctors collectively went on leave also to “protect them from following the orders of a de facto PGH director.”

There are currently two new directors of PGH vying for legitimacy. Dr. Gonzales was elected by the University of the Philippines system’s highest policy-making body, its Board of Regents (BOR), on Dec. 18 last year. But unlike the oath-taking of other officials who were elected in that December BOR meeting, Dr. Gonzales’s oath-taking did not happen as promptly because of a protest by one of the regents. The PGH operates under the UP.

On Feb. 25, the BOR replaced Dr. Gonzales with Dr. Enrique Domingo after booting out the student regent and nullifying her decisive vote in the Dec. 18 meeting. The protesting doctors noted, though, that only Dr. Gonzales’s election was nullified. The rest of the officials elected by the BOR in that December meeting are still serving their term.

“Our protest is not about personalities or about who is better between the two contending PGH directors,” said Dr. Joey Lapeña, an associate professor at the UP College of Medicine and attending specialist at PGH. Rather, in their statement, the doctors explained that “when a tenured, democratically elected and functioning PGH director in Dr. Jose C. Gonzales can be removed from office without due process and cause, it sends a message of oppression and shock to the PGH community.”

The mass leave was conducted a month after the unceremonious ouster by the BOR of Dr. Gonzales, and about three weeks after the Council of the UP College of Medicine came out with a resolution, which they later affirmed more resoundingly in a referendum (199 vs 19), stating that Dr Jose Gonzales is the legitimate director they recognize.

It appears that the protesting doctors have had enough of being told what to do or of being disrespected as their council resolution and subsequently votes in a referendum recognizing the legitimacy of Dr. Gonzales as PGH director were blithely being ignored by higher ups. Altercations to enforce the college resolution had prompted the resignation last March 24 of the associate dean of the UPCM, Dr. Abundio Balgos. And now the mass leave of doctors.

Spearheaded by an alliance that took shape late last year in response to what its members described as symptoms of a “UP in crisis,” the Laban UP-PGH (Struggle UP-PGH), announced last Monday that the number of doctors going on leave would increase in the days ahead. Laban UP-PGH, according to its website, is an organization made up of volunteers and advocates for justice and truth in the University of the Philippines and the Philippine General Hospital. It groups together students and faculty, PGH employees, health workers and health professionals.

The doctors going on mass leave are no ordinary doctors of UP-PGH. They are mostly experienced, highly qualified doctors such as surgeons or specialists in different fields, explained Dr. del Rosario. At the same time they are professors at the UP College of Medicine. As such, these doctors are consultants or trainers, too, of the residents and fellow doctors in PGH. The resident and fellow doctors are medicine graduates training at PGH.

The phenomenon of almost a hundred of the highest qualified doctors and professors of UP-PGH going on a mass leave for the sake of due process and democracy is already unprecedented in the country’s premier public hospital. But their being health professionals has also made their mass leave unusual, in the sense that they are still at work and on call despite their leave of absence. Their mass leave “does not intend to paralyze PGH, just to dramatize its protest, with aspects of eventual slowdown,” said Dr. del Rosario. Their leave would affect mostly the elective surgeries and non-life threatening matters and the bidding of the “de-facto director.”

As doctors, the protesters promised they will not abandon the patients already admitted in hospital and they will be available for emergency cases and critical aspects of patient care. They said their actions “will not affect life-threatening or emergency cases in PGH patients but may only delay elective surgeries attendance to outpatient cases or other non-life threatening illnesses for a limited time only.”

Dr. Lapeña, in fact, spent Tuesday doing surgeries where residents and fellow doctors in PGH also learn how to do surgeries, despite his being on leave. He admitted that in going on leave while continuing to deliver vital services as doctors and trainers, they seem to be at the losing end. But they have to dramatize their protests, said Dr. Del Rosario.

Those in “very sensitive leadership posts will likewise continue working in a limited capacity” despite their leave of absence. So far, five of 14 department chairs in the clinical department have refused to report to Dr. Eric Domingo, said Drs. del Rosario and Lapeña.

Aside from the mass leave of doctors, the doctors said other members of Laban UP-PGH such as students, nurses, institution workers, orderlies, student councils not just of UP College of Medicine but also of other colleges in Manila, Diliman, Baguio, among others, are expected to join the protest. (Bulatlat.com)