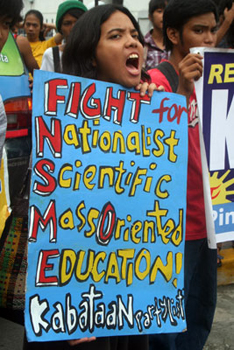 MANILA — Mrs. Mia Soriano went to the Manila Police District on Monday to bring food and clothes for her daughter Cheysser, one of the five students who were detained there after they were charged with robbery by officials of the Polytechnic University of the Philippines.

Cheysser was among those accused of burning 13 armchairs inside the school during a protest on campus last week against a proposed tuition increase.

Mrs. Soriano, however, was greeted by the news that PUP president Dr. Dante Guevarra had withdrawn the robbery charges against the five and that they were now free. “I am very happy especially because I saw the outcome of their struggle,” Mrs. Soriano told Bulatlat, adding that she is proud that her daughter represented the voices of thousands of students who did not want a tuition hike in PUP.

Mrs. Soriano said she never knew that her daughter was an activist. She remembered her arriving home with a husky voice. “Did you sing in a concert?” she would tease her daughter.

“I know that I would not spend my whole life in jail,” Cheysser told Bulatlat, adding that she is thankful to the youths and students who showed their support for them.

Mrs. Soariano said she was deeply saddened with what happened to her daughter but added that she believes in what her daughter is fighting for. “I have turned nights into days just to provide quality education for my children and this is what they did to them,” Mrs. Soriano said.

Guevarra went to the MPD personally to see the students. He told journalists there that the five students should not fear expulsion because the school is not even considering it. If the students are expelled, he said, “they will become a social problem, which I do not want to happen.” He said the filing of robbery charges was not a form of political harassment. 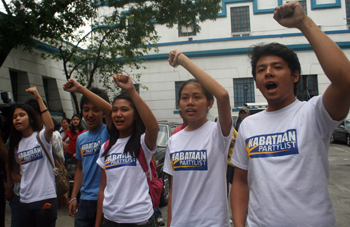 Lawyer Julius Garcia Matibag said that the withdrawal of the charges notwithstanding, the chances of the case against the PUP 5 being dropped if it reached the courts was very likely. “There is no intent to gain on the part of the students,” he said, referring to the 13 armchairs that the students allegedly brought out of the campus.

Matibag added that there was also no element of violence and intimidation, as the school guards allowed the students to bring out the 13 armchairs. The armchairs, all already damaged, were brought out in a jeepney that was allowed to pass through the PUP gate. The students had intended to use the chairs in more protests to symbolize, they said, the state of education in the Philippines.

“This matter is pure harassment from Guevarra since the students detained were leaders who led the protests in PUP,” Matibag said.

“This was one of Dr. Dante Guevarra’s desperate moves to get back at us,” said Abriel Mansilungan, one of the PUP 5, referring to the robbery charges. “I am not ashamed or regretful that I am here. I am proud that despite all this, we still won,” he told Bulatlat while he was still in police custody.

But Mansilungan said stopping the tuition hike is just a small victory, as they would continue to be vigilant. “Even if they said that there would be no tuition hike, we are monitoring other fees such miscellaneous fees, as it may be increased.”

The youngest of the PUP 5, Piem Canela, 18, said students were happy to know that there many supported their cause. “A professor came to visit us yesterday to boost our morale,” he said at the police precinct, adding that he also appreciated when a group of professors in PUP recently held a press conference to denounce what Guevarra had done to them.