By MARYA SALAMAT
Posted By: Bulatlat.com

In commemorating the infamous World War 2 Death March, members of KMU and Anakpawis marched yesterday from España to Mendiola Bridge near Malacañang to demand immediate action from the government to address the people’s worsening hunger and poverty.

With stagnant wages amid skyrocketing prices, workers are facing a worse situation these days, bordering on near-death hunger,” said KMU’s Elmer ‘Bong’ Labog. Several studies show that hunger incidence is higher in areas where people have low incomes, and the Philippines is among the top in the list. Last year’s Gallup International world hunger survey revealed that the Philippines ranked number 5 among 55 countries where the incidence of hunger is high.

As more Filipinos are being pushed “into the abyss of hunger and poverty,” KMU and Anakpawis said the Arroyo government should act with urgency on their “long overdue demand for a substantial wage hike.”

The progressive groups decried the Arroyo regime’s “persistent denial” of their just demand for a P125 ($2.78 at the current exchange rate of $1=P44.95) daily wage increase. That increase, they said, is now more urgent as Filipinos badly need to mitigate the effects of a severe dry spell as well as the continuous rounds of price hikes, which are notably led by price increases of oil products and electricity.

“Since 2001 up to now where the combined effects of El Niño and new rounds of price hikes make survival more difficult for Filipino families, Gloria Arroyo has ignored the persistent call of workers for a P125 legislated nationwide wage hike,” said KMU chair Elmer “Bong” Labog. 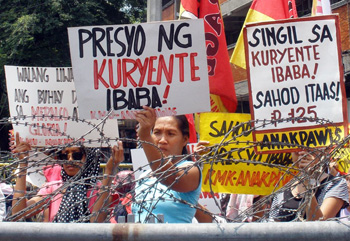 For two consecutive months, the government has allowed the Manila Electric Power Company (Meralco) to implement increases of up to P2.20 ($0.048) per kilowatt-hour in its electricity rates (P1 last month, P1.20 this month). Meanwhile, oil companies have raised pump prices of diesel and gasoline four times since last month.

Prices of food items, especially agricultural products, have also risen due to supply problems caused by severe drought in many regions.
And yet, the minimum wage levels in all Philippine regions have been stuck at 2008 levels despite the economic crisis. In five Philippine regions, the “prevailing wages are actually below the fixed minimum wage in those regions,” said the KMU in a statement.

Clearly, said KMU, “prices far outpace any minuscule increase in the wages in the past years.” 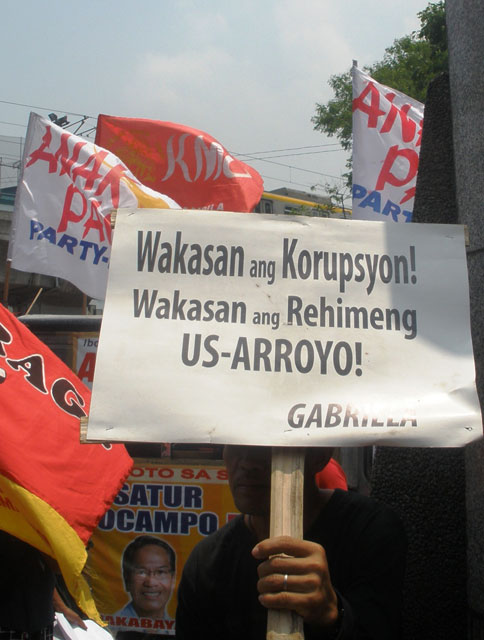 Representative Maglunsod recalled that after years in the legislative mill, the P125 wage hike bill had finally been approved on third reading three years ago but it was pushed back to the committee level purportedly due to a technicality. “Part of Arroyo’s anti-worker record is her outright opposition to the passage of the P125-wage hike bill. It was a clear injustice to workers thirsting for a substantial wage increase. It is a lasting black mark on Arroyo, who has clearly been an anti-worker president,” said Representative Maglunsod. 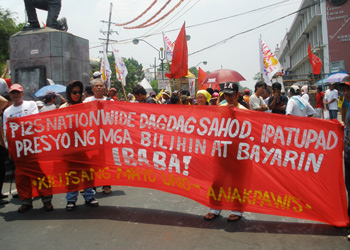 He concluded that the struggle for a P125-wage increase is not just about economic relief. “It is about struggling for social justice in a society where wealth distribution is highly skewed and where big businesses reap super-profits.”

Anakpawis party list representatives dared national candidates to the upcoming May elections to present their position on wage hike and workers’ issues. “The labor vote or the support of the country’s 35 million working population is crucial. Candidates must present concrete platforms on pro-worker employment generation and long term economic development,” said Maglunsod.

Despite the presence of progressive party list representatives in Congress, and despite pro-poor promises of traditional politicians during campaign periods, Maglunsod noted that “Congress hardly passed, if there is any at all, pro-worker legislations.”

The Philippine Congress is largely dominated by representatives of big landlords and big businesses. Party-list representation of marginalized groups of society is supposed to help correct the marginalization of a large section of the Philippine population. “But even the party-list system is now being used by representatives of the elite to gain entry into Congress and further bolster their already dominant position there,” said Maglunsod. He urged workers to continue supporting progressive party-list groups and to be more “discerning in choosing their candidates.” (Bulatlat.com)