Overseas Filipino Workers (OFWs) hired as bus drivers in Saudi Arabia and their families in the Philippines are crying foul over a “double whammy.” They sought the help of Migrante International, a migrants’ rights advocacy group, after finding out that their recruitment agencies had overcharged them for their placement fees. But as soon as they began to question the overcharging, the families they left behind in the Philippines reported that they are being harassed by the lending company referred by the recruitment agency.

“The 30 protesting OFWs are among the 300 bus drivers for Saudi Public Transport Company (SAPTCo), based in Dammam, who claimed their recruiting agency charged them a huge placement fee. To be able to pay for it, the recruiters referred them to a lending agency, which gave them onerous loans,” Migrante Middle East Coordinator John Leonard Monterona said.

The recruitment agency charged them a placement fee of P35,000 ($783), excluding the P8.000 ($174) processing fee and other charges. According to the Department of Labor and Employment, recruitment agencies could charge a maximum amount equivalent to the OFW’s one month salary as placement fee.

Edna Santos, not her real name, is wife of one of the drivers who decried the overcharging. Santos requested anonymity to protect her husband abroad who, she fears, might get in trouble as a result of speaking out.

She said it was her husband’s first time to work abroad. “I did not want him to leave in the first place,” Santos told Bulatlat in Filipino. Her husband’s income as a city bus driver in Manila was higher than the job offer from Saudi Arabia. 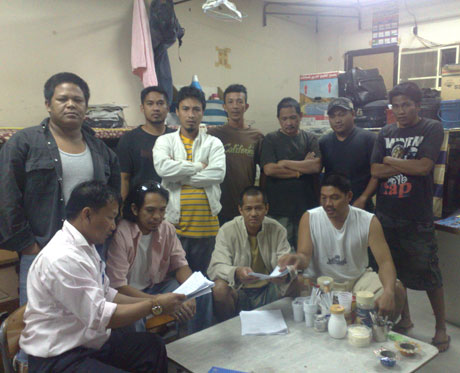 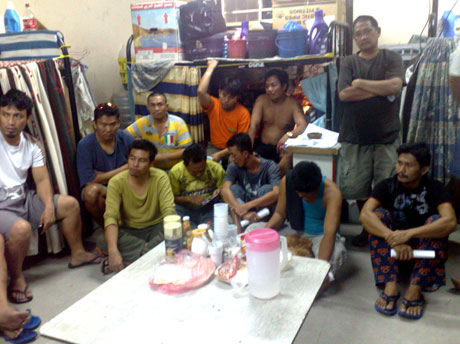 Santos’ husband was earning as much as P20,000 (US$448) as a bus driver in Manila while the offer from SAPTCo is only 1,300 riyals or P16,000 (US$358). “But he thought that from Saudi, it would be easier to ‘cross country’ to earn more.” Cross country refers to the practice of OFWs of looking for a higher-paying job in a nearby country while still working in their host country.

Upon applying, her husband was charged P35,000 (US$783). As they did not have money, they were referred by the agency to a lending company. They loaned a total of P58,000 (US$1,298). But, Santos said, they never handled the actual money. The loaned about P35,000 (US$783) was sent directly to the recruitment agency to pay for the placement and processing fees, as well as the other fees being levied on them.

In the end, they actually got hold of only about P7,000 (US$157) in cash. But they were never given a single receipt for all the transactions.

“My husband never thought that we were being overcharged by the recruitment agency. It was only when he arrived in Dammam that he learned about it, after he compared the amount of fees he paid with that of his colleagues,” Santos said.

“We have no plans of running away from our loan,” Santos said, “It is just that we do not yet have the money to pay for it.”

SAPTCo has not yet provided for her husband’s food allowance worth 300 riyals. As such he could not send his entire salary to his wife in the Philippines; he had to get some amount for his own expenses in Dammam. So Santos only receives around P9,000 ($196) per month from her husband. It is barely enough to sustain their three children’s needs.

“The food allowance was supposed to be given to my husband as early as November last year. But he was repeatedly told to just follow it up,” Santos lamented.

Because of their failure to pay the interest and penalties, Santos got frequent phone calls from the lending agency reminding her of their obligation to the company. Santos is afraid that the lending company might file criminal cases against her.

Santos’ fear and predicament are similar to the kin of the rest of the 30 bus drivers who have sought their assistance, said Garry Martinez, chairperson of Migrante International. They are encouraging the kin of the overseas Filipino bus drivers to remain strong as they campaign against the overcharged fees and in possibly facing criminal charges as a result of their failure to pay the monthly amortization for their loan.

Migrante International has already consulted a lawyer, who said there are good chances of winning the case in their favor if the lending agencies filed charges against them.

“Because they were not running away from it in the first place,” Martinez said. He added that Migrante is now preparing a series of legal moves and protest actions. Santos said she would be more than willing to join Migrante’s activities even if it were to include protest actions.

Meanwhile, Monterona in Saudi Arabia said that DOLE and the Philippine Overseas Employment Agency should investigate this matter and “immediately call the attention and summon the recruitment agency and its cohort lending agency.” (Bulatlat.com)