You Are Here: Home → 2010 → April → 20 → Environmental Groups List Arroyo’s Crimes Against the Environment and the People

Katribu party list first nominee Beverly Longid said it was insulting. “It is insulting that those big corporations who are also responsible for the massive destruction in the environment are awarding so-called environmental awards. Second, it is doubly insulting that Arroyo would receive such an award when she has done nothing to protect the environment; in fact she has done the opposite. Arroyo cannot claim to be green when she has a bloody record of human rights violations all over the country.”

In response, Katribu and the Kalikasan People’s Network for the Environment also gave two awards to Arroyo –the #1 Eco Thug Award and the Kalabasa Ecological Award. Kalabasa is the term used by Filipinos to mean failure.

In a press conference yesterday, Clemente Bautista, national coordinator of Kalikasan PNE said that Arroyo is the “most anti-environment and anti-people president ever.”

During the nine years of the Arroyo government, the group said the degraded environment and natural disasters are its worst legacy. “President Arroyo implemented policies that opened up our forests, mountains and seas to foreign and private corporations for the reckless extraction and plunder of our mineral, timber, oil and marine resources. These policies have brought so much environmental devastation,” said Bautista. 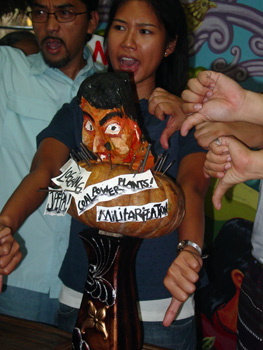 “These crimes are conscious, odious offenses that are part of systematic practice and policy that result in massive environmental destruction, attack on human rights and dignities of a community or group of persons, and pose a threat to the current and future and generations,” he said.

The “large-scale mining offensive” is considered by the group as the most grave environmental crime of the administration. According to Kalikasan, the latest count of mining tenements is 348 covering 744,199 hectares across the country. It has adverse environmental consequences and impacts on community health, displacement of indigenous people, upland settlers, as well as all who are dependent on the ecosystems. It exposed them to violations of human rights and civil liberties, and militarization for dubious economic gains.

Massive deforestation for corporate production amid the lack of effective reforestation program is another crime, the group said. Commercial logging, the group said, has resulted in some of the worst tragedies in history such as the 2001 Camiguin flashflood, 2003 Southern Leyte landslide, 2004 Aurora-Quezon landslide, 2006 St. Bernard landslide and the Bicol mudslide.

The facilitation of marine degradation and pollution is also in the list. The country’s marine areas were cited as the most threatened marine hotspots in the world and the fish productivity is fast declining, 97 percent of the country’s coral reefs are under serious threat. Of the 500,000 hectares of mangrove, only less than 120,000 hectares remain.

The group also slammed the privatization of energy resources and the failure to harness renewable energy potential. During the Arroyo administration, several pollutive coal power plants were constructed , which increased the use of dirty sources of industry that poses grave environmental and health costs to the country.

The Arroyo government has also promoted the privatization and depletion of fresh water resources. The study conducted by environmental groups revealed that only 34 percent of Filipinos do not get water from formal sources for domestic consumption while 45 percent of irrigable farms are served by the state and private irrigation systems. This is because water resources are being controlled and used by big foreign and private corporations through their water permits stipulated in water laws.

The Arroyo government also lacks genuine disaster-preparedness mechanisms and programs, the group said. The government has been incompetent and helpless to mitigate the havoc caused by typhoons Ondoy and Pepeng.

Even environmental activists and defenders are not spared of the numerous violations of human rights under the Arroyo administration. As of March 2010, Kalikasan PNE has documented 27 cases of extrajudicial killings, one case of attempted murder, two enforced disappearances and several law suits against environmental defenders.

The group also hit the deceitful act of signing the the Japan-Philippines Economic Partnership Agreement (JPEPA) and other bilateral agreements. The Kalikasan PNE said that the JPEPA is an assault on national sovereignty, patrimony and environmental protection. According to the study, it mimics the same logic and intentions of previous colonial-era trade agreements with the country’s former colonizers. These agreements caused the present environment problems such as massive deforestation, marine resource degradation and plunder of mineral wealth.