Sen. Maria Consuelo ‘Jamby’ Madrigal and Nicanor ‘Nicky’ Perlas may not be leading the surveys in the race for the presidency but the two have been named as the most environment-friendly candidates.

The LYFE had chosen as barometer issues critical to the environment, including the Bataan Nuclear Power Plant (BNPP), coal mining/power plants, logging, mining, Visiting forces Agreement (VFA), Japan-Philippines Economic Partnership (JPEPA), US Bases clean up, use of genetically-modified organisms (GMO) and its commercialization (i.e. BT corn), aerial spraying of plantations (banana plantations) and climate change. They said these issues have far reaching effects especially to grassroots sectors that comprise the majority of the Filipino people.

Madrigal was cited for her strong position and actions on the issue of the BNPP revival, coal-fired power plants, mining, logging, VFA, JPEPA, GMOs and active support for mitigating the effects of climate change.

Second is Perlas for his track record of launching campaigns versus BNPP during 1970s. He also advocates the use of geothermal and renewable energy instead of coal power plants and authored several papers on climate change and GMOs. 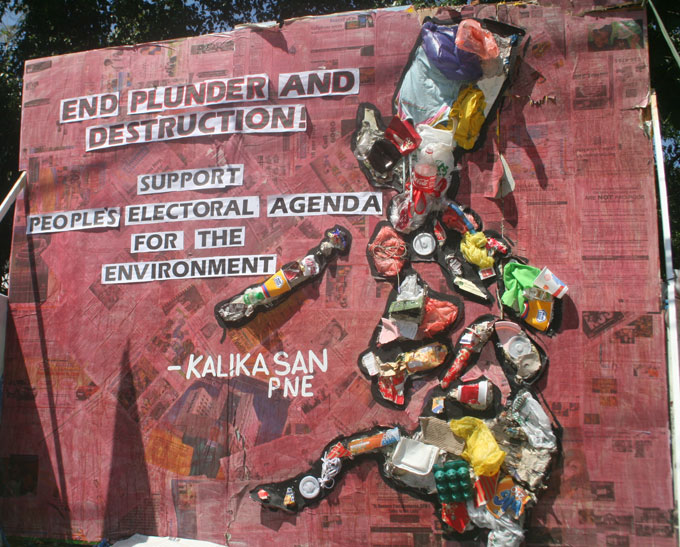 In the survey, one green bean point was given for every environmental friendly answer or record of a candidate or group. One mean bean on the other hand was awarded for every environmental destructive answer/record that they might have. According to LYFE, these bean counts are then added together for the final tally that was used to rank the candidates.
The survey also showed that the least environment friendly or the “mean bean” among the nine aspiring presidents are; Sen. Richard Gordon for his staunch support for the VFA, JPEPA and the Mining Act of 1995 and former president Joseph Estrada for approving VFA during his term and for issuing Executive Orders barring the lower courts from issuing Temporary Restraining Orders (TROs) on so-called “national priority projects” which includes infrastructure and mining operations.

The third mean bean or the “worst in environmental track record” is Gilbert Teodoro for his staunch support for the VFA and aerial spraying.

For the vice presidentiables the greenest or the “green beans” are: Sen. Loren Legarda who has consistently taken positions and actions on the issues of mining, logging, VFA, aerial spraying and climate change. But according to the report, Legarda also voted for JPEPA and filed Senate Bill No. 2083 for Cap and Trade which is a widely criticized approach to carbon trading.

Second in green bean points is Makati Mayor Jejomar Binay. The report said that he did not have any track record of taking up environmental issues but he articulated a pro-environment position on the BNPP, coal power plants, mining act, logging, VFA, JPEPA, aerial spraying and GMOs.

The third highest green bean goes to Perfecto Yasay for his anti-BNPP and JPEPA position although he is in favor of VFA.

Bayani Fernando was the least favored by environmentalists. He caused the cutting of trees in the metropolis and favors the VFA. Second is Jay Sonza for his position on aerial spraying.

For the senatorial candidates, partylist representatives Liza Maza and Satur Ocampo topped the list of the greenest senatoriables.

The report said Ocampo garnered the highest point as the greenest senatoriable for his active support for the NO to BNPP revival. He was also active in the Bases clean-up campaign even before he became a congressman. He also actively opposed JPEPA and VFA.

On the other hand, Rep. Maza is also active in campaigning against the revival of the BNPP, has a strong anti-US bases advocacy and is also active in the US bases clean up campaign, as well as in opposing the VFA. According to the report, she led a rally during the first day of the Copenhagen talks in the recent 2009 United Nations Climate Change Conference (COP15) to urge the world leaders to create a binding and just agreement and to oppose foreign plunder of natural resources.

As representatives of Bayan Muna and Gabriela Women’s Party, respectively, Ocampo and Maza filed bills and resolutions related to protecting communities from the various effects of coal power plants, mining, logging entry of GMOs in the Philippines and aerial spraying.

For the mean beans, Sen. Juan Ponce Enrile was found to have the most anti-environment track record. He owns a logging firm in Samar and a magnetite mining operation in Cagayan Valley. He is pro BNPP, JPEPA and VFA.

Ralph Recto came in second for being amenable to the Mining Act as long as the government improves the taxes collected from mining operations. He is also in favor of the VFA and JPEPA. Third mean bean is Francisco ‘Kit’ Tatad as principal author of the Mining Act of 1995 but urged then President Estrada to enforced a log ban. He is also pro-VFA.

Fourth mean bean is Rodolfo ‘Ompong’ Plaza. According to the report, his family owns a logging empire in Agusan del Sur but as a congressman he filed House Bill No. 4767 to ban logging in Southern Leyte as well as a House Resolution urging an inquiry into the mining and environmental effects of the local cement production industry. He is also pro- BNPP and aerial spraying.

The partylist groups, the report said, were were ranked according to their track record on the environmental issues identified in the survey.

Survey showed that Bayan Muna, Gabriela Women’s Party and Anakpawis have the most environment-friendly track record. The report said that these are among the groups who fought against the construction and operation of the BNPP during the 1970s and 1980s and against the revival of the BNPP. They were active in the Bases clean-up campaign even before they got elected in the Congress and in the campaign against VFA and JPEPA.

They also help communities affected by logging, mining and coal plants by raising their awareness about the different effects of the three industries and assist them in the process of adaptation and recovery from its ill effects. In Congress, they filed several bills and resolutions related to protecting communities from various effects of coal power plants, mining, logging, entry of GMOs in the country and aerial spraying.

They also organize and empower communities to face their adversaries and voice out their complaints to seek justice and conduct climate change awareness and adaption projects for the benefit of their constituents.

Second most environment-friendly among the party-list groups is Kabataan for being active in campaign against the BNPP revival and against destructive large scale mining in the country. Kabataan actively participates in local campaigns against coal fired power plants and coal mines in communities. It supports the struggle against logging companies in affected communities.

In Congress, it filed House Resolution No. 1570 expressing support to the ongoing efforts, especially of the Filipino youth calling for the reduction of carbon dioxide concentration in the atmosphere to 350 ppm to ensure the sustainability of human life on earth. It also urge leaders of the Group of Eight countries to commit to the legally binding and effective climate treaty at the Copenhagen climate change conference to reduce carbon emissions.

It is also active in the campaign against JPEPA and calls for the abrogation of the VFA.