More than 50,000 workers are expected to join the actions in Metro Manila on Labor Day led by militant labor center Kilusang Mayo Uno (KMU). This year’s commemoration of Labor Day will highlight the workers’ presentation of the labor agenda to national candidates and labor’s assessment of Gloria Macapagal-Arroyo’s nine-year rule.

“Millions of working Filipinos will cast their votes on May 10 with hopes that the country and the government will be better for the next six years. With the labor force standing at 35 million, workers are a force that the next administration cannot simply ignore.

“All presidential candidates are saying that they are pro-poor and that they will end poverty and corruption. But none have presented a concrete, long-term agenda for the labor sector. We want to hear what these candidates would do to address low wages, joblessness, labor migration, poor working conditions and violation of labor rights and standards,” said KMU chairperson Elmer Labog.

“We urge all Filipino workers here and abroad to vote for candidates that will support these demands and challenges: 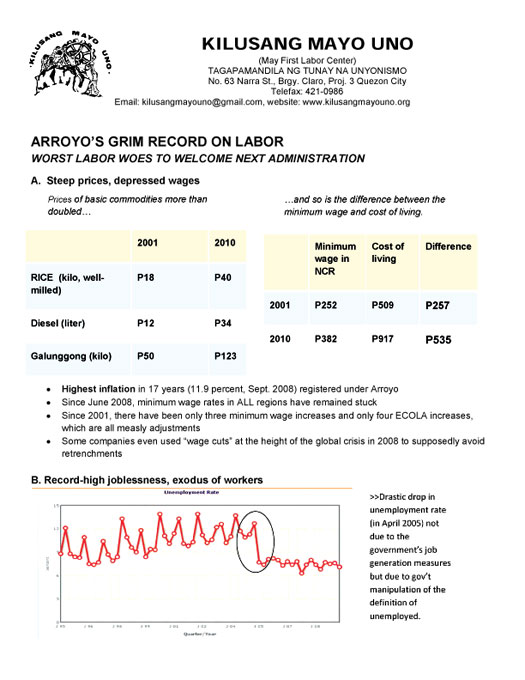 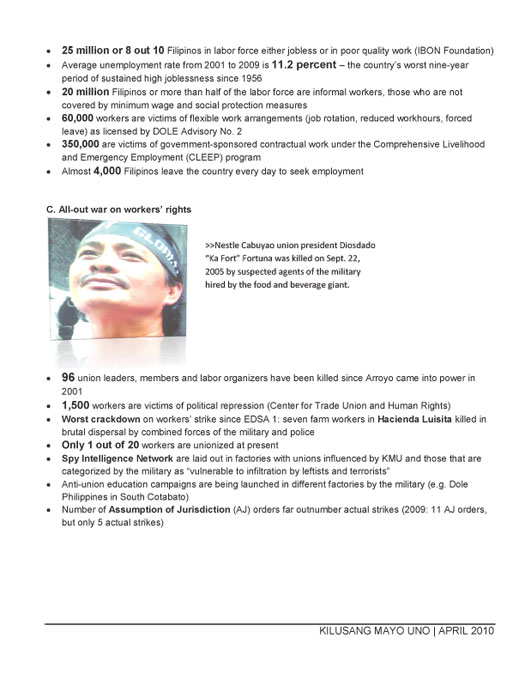 1. Legislation of significant wage increase for workers
2. Promotion of workers’ rights; stop the criminalization of workers
3. Review of the Labor Code of the Philippines, reversal of laws promoting labor contractualization and flexible labor, and junking of the Assumption of Jurisdiction
4. Local job generation, reversal of labor export policies
5. Control in the prices of commodities, penalization of big companies that overprice goods and services
6. Increase in budget spending for social services
7. Support efforts to liberate country from foreign debt dependence
8. Support efforts to liberate local economy from dependence on foreign market and capital
9. Justice for all the victims of political repression, trade union and human rights violations
10. Trial and prosecution of the Arroyo administration for its crimes against the people

Labog said the labor group is open to endorse presidential, vice-presidential and senatorial candidates who will support their demands.

Do not repeat Arroyo’s failure

KMU also warned the next government not to repeat the failures of Arroyo.

“Record high unemployment, depressed wages and grave abuse of workers’ rights characterize the Arroyo administration. We want these conditions overturned. This is our challenge and demand to the next government,” the labor leader added.

“For the past nine-years, she neglected the most urgent demand of workers which is economic relief and even implemented packages of anti-labor policies to favor local and foreign businesses. Addressing the plight of working Filipinos was the least priority of the Arroyo administration. Since day one, it was the employers and the elite sectors that benefited from her governance,” Labog said.

“The nationwide workers actions on Labor Day will also serve as our farewell to Mrs. Arroyo. We have had enough of her and we will frustrate all her efforts to remain in power beyond June 30, 2010.”

Thousands of workers will converge early Saturday morning at the following assembly areas: UST in España, Taft Ave. cor. Quirino Ave., Blumentritt cor. Sta. Cruz, Manila, and Plaza Moriones in Tondo. From these points, workers will march to Liwasang Bonifacio, wherein the main program will be held at 2 p.m.