MANILA – Kontra Daya, together with various people’s organization and progressive party-list groups as well as Makabayan senatoriable bets Rep. Satur Ocampo and Rep. Liza Maza held a protest action in front of the Comelec office today to protest against a “no-election and holdover scenario” and to hold Pres. Gloria Macapagal Arroyo, the Comelec and Smartmatic accountable for the numerous problems plaguing preparations for the May 2010 elections.

They are calling on the people to be vigilant in the coming May 10 automated elections as the previous testing of the precinct count optical scan machines (PCOS) has been showing glitches. Fr. Joe Dizon, convener of Kontra Daya said this election is vulnerable to massive fraud due to its defective machines.

“We have expressed our doubts about this automated election, even IT experts express doubts on its reliability. But the Comelec did not listen to us, instead they left it all up to Smartmatic without a back up plan,” said Fr. Dizon during the protest.

He said these machines are bought using the people’s money and yet the automated election system, which is meant to be trouble-free, appears to be complicated and at risk to massive fraud. “It’s a miracle if we will have a clean, peaceful, successful and credible elections,” Fr. Dizon said.

Giovanni Tapang, convener of Kontra Daya also said in a statement that “It is not enough that we will have fast elections, as Smartmatic claims we will. We need credible elections, where results will be correctly tallied.”

Kontra Daya also said the Comelec, Smartmatic-TIM and the Arroyo administration should be held accountable for whatever scenario that may arise from the failure of the PCOS machines.

According to Kontra Daya, they have received several reports of PCOS machine failures in the final testing conducted in various cities and municipalities starting May 3. Many PCOS machines failed to read the votes for local candidates, resulting in machine counts not tallying with manual counts. 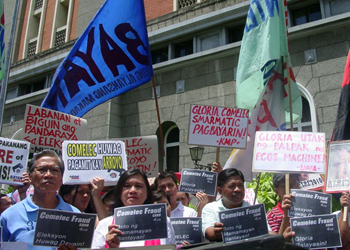 Renato Reyes, Bayan secretary general, said in a statement that “The upcoming polls will be conducted under a cloud of doubt and suspicion because of recent events that are the doing of Comelec and Smartmatic. What happened were not just glitches but a potentially fatal nationwide malfunction. Even if these are resolved as Smartmatic says they will, the damage to the poll’s credibility has been done.”

Bayan also said that the recent turn of events can be exploited by those who are pushing for a no-election scenario or postponement. “This is what the Arroyo regime can use to justify a holdover,” Reyes said.

He also said these problems are avoidable, but what’s puzzling is why the Comelec and Smartmatic did not take the necessary steps to avoid these problems despite calls from various sectors. That is why, he said, the call for postponement of elections by Romulo Macalintal, former election lawyer of Arroyo is dubious. “This can be linked to moves to keep Mrs. Arroyo in power,” Reyes said. 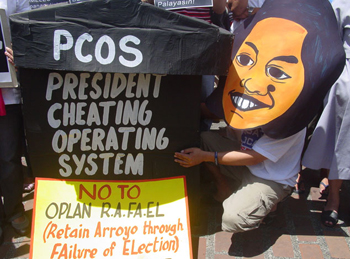 Rep. Maza also said in a statement, “The stage is being set for the elections to fail to pave the way for the extension of Arroyo’s rule in power.”

Fr. Dizon on the other hand said, “Any instability that may arise from either a failure of elections or a postponement of the polls will benefit no one but Mrs. Arroyo. The Palace and its allies may take advantage of the situation to maneuver toward perpetuating themselves in power.”

They are calling for the people to be more vigilant and to act against all moves to retain the Arroyo administration. Reyes said the military are being deployed in at least 10 cities in Metro Manila, not just to safeguard the elections in the so-called election hotspots but to also quell protests that may erupt when the elections fail. 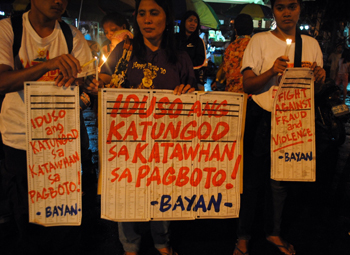 Members of various groups led by Pagbabago!-Mindanao held a vigil at the Centennial Park in Davao City, to reject calls for the postponement of the May 10 elections.(Photo courtesy of Pagbabago! Mindanao / bulatlat.com)

“What is certain during these uncertain times is that the people will surely act should there be election fraud and failure. We ask the people to be vigilant and monitor the PCOS tests that will happen from now until Monday, because that is one indicator of how the poll automation will be carried out,” Reyes said.

Bayan said the testing of the PCOS machines will be carried out until election day on Monday, and the Comelec has admitted that there will be inevitable poll delays.

“We are calling on all opposition and individuals to be vigilant and to act against all moves to retain the current administration,” Maza said. (Bulatlat.com)