While Nestlé treats with contempt the High Court’s repeated rulings regarding the inclusion of the retirement plan in the collective bargaining negotiations, the Arroyo administration through its labor department tried to quell the strike even before it was launched, by gagging it with an Assumption of Jurisdiction order as soon as the workers voted overwhelmingly to conduct a strike in November 2001.

When the workers proceeded with their strike, the Department of Labor and Employment (DOLE) ordered the striking workers to return to work, and when they didn’t, it deputized a thousand police and hundreds of Nestlé guards to enforce its order.

“Bribery scandals marked these DOLE orders, as the then labor secretary Patricia Sto, Tomas’ trip and limousine service in Switzerland and shopping in Italy were reported to have been bankrolled by Nestlé,” said Noel Alemania.

The Philippine Supreme Court has not only repeatedly affirmed its 1991 ruling about retirement packages being fair ground for negotiation in the CBA, it has ordered Nestlé and the UFE to go back to the bargaining table last March 2008. This decision was deemed by the High Court as final and executory.

”But Nestlé continuously refuses to abide to that, with the blatant collusion of the labor department,” Noel Alemania told Bulatlat last week.

“Instead of reinstating the more than 616 workers dismissed for going on strike, as ordered by the SC, Nestlé supported the formation of a company union a few days after SC came out with its March 2008 ruling,” Alemania said. The company support to the ‘new union’ is so blatant, he said, “They have RSAF escorts and are being ferried by company vehicles to DOLE” 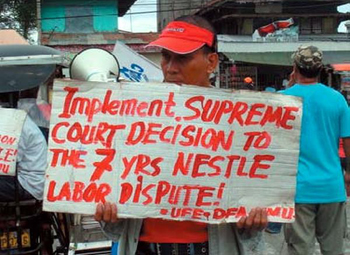 “The DOLE, meanwhile, granted the company union’s petition for certification election, despite the fact that there’s a very fresh recognition of the UFE by no less than the Supreme Court as the bargaining representatives of workers in Nestlé,” said Alemania. In this way, he said, “Labor secretary Marianito Roque has overturned the intent and content of the SC decision.”

“The DOLE has approved the petition for certification of these military-escorted ‘union officers,’ last month, even as the law clearly prohibits the interference of the management in union matters,” Alemania said.

While the remaining strikers continue to maintain a picketline across Nestlé, conduct protest actions every Monday, and hold rallies in front of DOLE and the courts from time to time, the UFE-DFA-KMU has also actively made its presence felt in cyberspace. They have established three blogsites where they frequently upload updates, videos, pictures and other documentations of how their rights are being bloodily trampled upon by Nestlé and the labor department. They are also active in forging relationships with support groups and networks of unions abroad.

They are hoping to drum up support for their struggle and to expose the blood debts of Nestlé to its workers, in hopes that it would soon stop attacking them and start respecting their rights.

Meanwhile, it appears that Nestlé has been decimating the number of strikers and the rest of the long-time employees who remained employed in its Cabuyao plant. Three years ago, in anticipation of the 2nd SC ruling favouring the strikers, Nestlé had dangled an offer of separation pay amounting to one month’s salary per year of service to the dismissed strikers, in exchange for a “quit claim.”