You Are Here: Home → 2010 → May → 12 → 2010 Elections: Comelec and Smartmatic Should Account for Disenfranchisement and Other Poll Problems – KontraDaya

2010 Elections: Comelec and Smartmatic Should Account for Disenfranchisement and Other Poll Problems – KontraDaya

MANILA — How many voters per clustered precinct had actually managed to cast their vote last May 10? How much of the actual votes cast had to be manually counted, given that many PCOS machines conked out on May 10? How are these manually counted votes secured or respected?

All these seem destined for sweeping under the rug as the conduct of the May 10 elections–despite the long lines of voters and too few PCOS machines, some of which malfunctioned, in many parts of the country– is variously being hailed now as “smooth,” causing the Comelec to “smile again” and say they have been “vindicated.” But from the chaos of May 10 the Comelec has simply been shifting the country’s attention toward the canvassing of the results.

The still unaddressed disenfranchisement of hundreds of voters per clustered precinct, or some estimated 20 to 30 percent of listed voters per polling center who appeared to have failed to cast their votes despite lining up for hours last May 10, is in danger of being drowned out.

While saluting the commitment of millions of Filipinos in exercising their right to vote and in so doing, making the most of the opportunity to show their indignation over the nine-year presidency of Gloria Macapagal-Arroyo via their ballots, KontraDaya has blamed the Comelec and the private firm Smartmatic-TIM for having “greatly undermined“ this commitment.

“The Comelec should at the very least apologize to the voting public for the poor preparations for the automated polls,” KontraDaya said two hours after the precincts closed down on May 10. 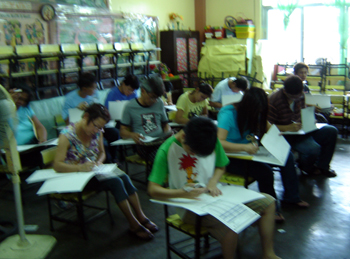 Voters in Sampaloc finally got their chance to cast their ballots after hours of waiting. (Photo by Kristine Abigail Lingbaoan / bulatlat.com)

Filipino voters nationwide trooped to their respective polling centers and braved long lines, heat, and in some cases, even intimidation, just so they could cast their votes. But from 6 a.m. of May 10 up to closing time at 7 p.m., these voters encountered the following “major trends,” as monitored by the KontraDaya:

• PCOS failures were monitored across the country, many in Luzon, with several reports coming from NCR;

• First time voters disenfranchised as they are not included in the voter’s list, several incidents monitored in NCR;

• Several incidents where ballots are pre-shaded, incidents of vote buying, etc. in Luzon, mostly in NCR, and many in Mindanao;

• Several cases of election-related violence monitored nationwide, many in Mindanao;

• Delayed voting was prevalent nationwide, with the delays reaching as late as 12 noon like the cases in Lubao and Bacolor and Pampanga; 1 to 2 hours of delays in voting were common; and 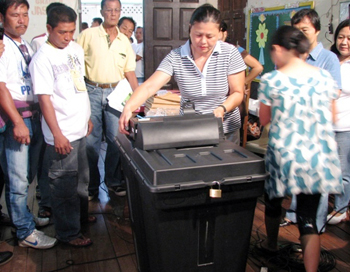 Bangued, ABRA — One of the Precinct Count Optical Scan (PCOS) machine broke down in Zone 5, Precinct 7, West Bangued Elementary School. Despite the machine malfunction, the voting process continued. The Board of Election Inspectors (BEIs) decided to collect the ballots manually and drop them at the ballot boxes. They plan to have the ballots counted when the replacement machine arrives at 6pm later on Monday. (Photo courtesy of PIOM Abra Team / bulatlat.com)

Far from the Comelec being vindicated, KontraDaya said the actual conduct of the automated election system (AES) confirmed the many issues and concerns they and other poll watchdogs in the country have repeatedly raised in the past months. These included Comelec’s lack of contingency plans, insufficient training of members of the BEI, time and motion studies, and the rigorous testing of the PCOS machines. These issues, said KontraDaya, “made the elections highly prone to fraud and at the minimum have disenfranchised many voters across the country.”

Despite the vaunted high speed of automated elections, Filipino voters were made to wait in line from 2 to 5 hours just to cast their votes. Many were reportedly still in line when the polling was ended.

“The clustering of the precincts bloated the number of voters per PCOS machine and BEI, which led to breakdown of order in some precincts as more and more voters arrived,” explained Giovanni Tapang, convener of KontraDaya. The breakdown was compounded by malfunctioning PCOS or inadequately oriented election inspectors or both. 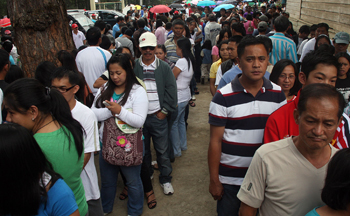 BAGUIO CITY — Voters wait for at least four hours at Rizal Elementary School in Brgy. Pacdal before they can cast their votes. Although no huge problems hounded the PCOS machines in Baguio at the start of the polls at 7AM,  a long list of complaints mostly the very slow process of voting coupled by the long hours of queueing hounded the first automated polls. (Photo by Artemio Dumlao / bulatlat.com)

Toward the afternoon of May 10 when some polling centers relatively cleared, KontraDaya’s monitoring found that it was only because many disgruntled and frustrated voters had simply left the polling center.

Tapang said his group had urged the Comelec to simplify the flow to shorten the voting process. But “they added more steps, such as making voters look up their names.” That was one of the Comelec’s errors, said Tapang.

Clustered precincts with more listed voters were expected to see higher turnout in a fast and efficient automated election. Instead, Tapang said it appears that it was in those crowded precincts where more voters had been disenfranchised.

The ultimate accountability in the bungled preparations for the entire election process lies with the Arroyo government, said Renato Reyes, Jr., convenor of KontraDaya. The group is urging all citizens to closely observe whatever transmission problem awaits the Filipinos’ votes.

“A lot can happen in the transmission,” said Father Jose Dizon, another convenor of KontraDaya. He pointed to the presence of “threats and various security issues, least of which are in the ballots that were not read by PCOS machines as voting were held in many polling centers despite the PCOS machines shutting down or malfunctioning. (Bulatlat.com)