Twelve Days in the Forest

BOSTON, DAVAO ORIENTAL— Police Officer 3 Alan Dapitanon said he was very nervous when guerillas of the New People’s Army (NPA) held them at gunpoint in the checkpoint the NPA mounted in Pasian village in Monkayo, Davao del Norte. The NPA told them to drop to the ground so that nothing would happen to them.

But since May 5, when they were captured, to May 17 when they were released, Dapitanon and the five NPA captives that included Lingig Mayor Roberto “Jimmy” Luna Jr. were not handcuffed nor put in makeshift jails. Dapitanon said he would tell the people when he gets home that the NPAs ”knew how to respect the rights of prisoners of war.”

Roel Agustin II, spokesperson of the NPA’s Front 20 Conrado Heredia Command, said they did not handcuff the five because their captives followed rules. Agustin even recalled the night when the NPA guarding the captives fell asleep. One of the “prisoners” awoke and told the NPA guard he needed to pee. 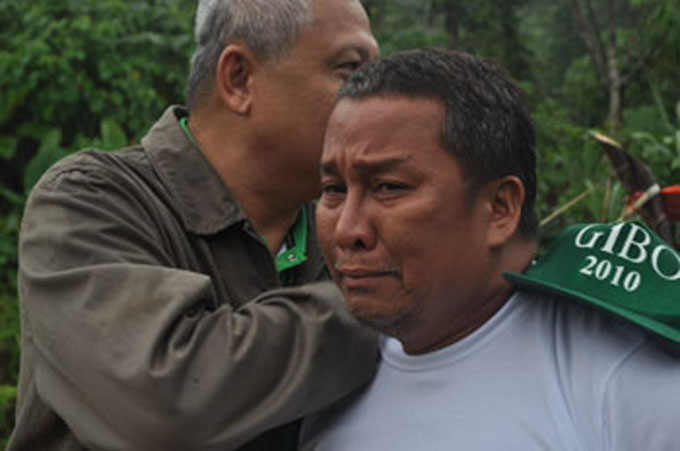 Luna said they cannot demand anything “lavish” because they knew they were in the mountains. But he said the NPA provided them with the best food they could offer; which included eggs, corn beef and other canned goods.

Luna’s makeshift bed had a pack of junk food and biscuits which he generously offered to the media during the interview at the NPA’s campsite. Luna said those were some of the food he requested the NPAs to buy. He said he also had some chocolates with him even though he knew it was bad for his diabetes.

The NPA’s medical team held regular checkups on their health and provided them with medicines when necessary. Luna said the moment the NPAs found out that he is diabetic, the NPAs procured the medicines he needed. Private First Class Arnel Dizon said the NPAs gave them food, personal items, including the brand of the items they requested.

Dapitanon said they transferred places five times. He said he understood it was the NPA’s way of ensuring their safety.
Luna said the long walk in the mountains helped improved his health. While walking in the mountains, he said he saw big rivers and huge trees. It was also his first time to hear the sound of the kalaw (hornbill).

Luna even made a joke that the lesson he learned from his captivity was to protect the environment. He said he might become an environmentalist after seeing the real beauty of nature in the mountains of Boston, Davao Oriental. (Grace S. Uddin / davaotoday.com)