You Are Here: Home → 2010 → June → 4 → Relatives of Desaparecidos Urge Next Government to Give Justice to Victims, Prosecute Arroyo

Relatives of Desaparecidos Urge Next Government to Give Justice to Victims, Prosecute Arroyo

“It is people who they abducted. Honor is a perfect husband and a perfect father. And for eight years I have lived with a feeling of emptiness and dread because of the possibility that he is never coming back home,” Dee Ayroso, wife of a missing activist, tearfully said in a press conference Tuesday June 1.

Honor Ayroso and his companion Johnny Orcino were abducted on February 9, 2002 by four to six armed men in civilian clothes believed to be elements of the 71st Infantry Battalion in San Jose City in Nueva Ecija.

“Noynoy, the road to justice and reality is not straight and wide. It is long and narrow and rocky and full of twists and turns. It is a road less traveled. Still, we urge you to walk down that path. Help us find Honor and Johnny and all the desaparecidos,” Ayroso said, addressing presumptive-president Benigno “Noynoy” Aquino III. 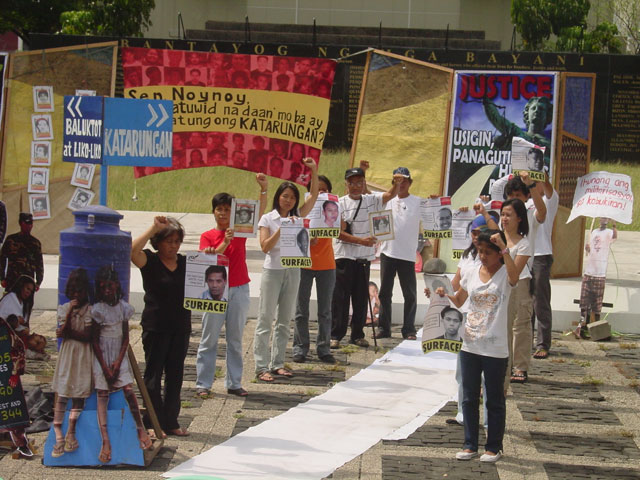 “This is our way of commemorating the International Week for the Disappeared. Also through this, we are reminding the next administration of our country not to repeat the wrong doings of the Arroyo government and to give justice to all victims of enforced disappearances from Marcos to the Arroyo regimes,” said Lorena “Aya” Santos, daughter of National Democratic Front consultant Leo Velasco who was abducted on February 19, 2007 in Cagayan De Oro, Misamis Oriental.

According to Desaparecidos, the number of victims of enforced disappearances have reached close to 2,000 since the Marcos regime; 205 were abducted during the Arroyo regime.

“We are urging the next president to make good his promises and to be completely opposite of the outgoing repressive and corrupt Gloria Macapagal-Arroyo,” Mary Guy Portajada, daughter of Armando Portajada who was abducted on July 31, 1987 in front of the Coca-cola factory, said.

“You have heard the heart grinding episodes of how we, the living, are looking for our loved ones. Now that Arroyo is leaving and we shall have a new government, there is much hope here,” said Edith Burgos mother of Jonas Burgos and chairwoman of Desaparecidos.

Jonas has been missing since April 28, 2007 when he was forcibly taken by suspected military agents at Ever Gotesco mall in Quezon City. The plate number of the vehicle used by the abductors was traced to a vehicle impounded at the camp of the 56th Infantry Battalion of the Philippine Army in Bulacan.

“Putting all our hopes together, our grief, we plead to the new government to surface the victims of enforced disappearance from the Marcos regime to the Arroyo regime,” Burgos said.

Open the military camps and safe houses for searches by independent search teams, the group demanded. “All that we want is the truth, if this government is not hiding anything then open the camps so that we will know who is really telling the truth,” said Burgos.

The group also demanded that the investigation of all the cases of disappearances be expedited. “If indeed human lives are valuable to this government, then we plead that the guidelines of the Writ of Amparo be followed, that all cases be dealt with expeditiously so that we can still recover our loved ones alive and well,” Burgos added.
The group also called on the new government to prosecute President Gloria Macapagal-Arroyo and the officials of the Armed Forces of the Philippines (AFP) who are responsible for the disappearance of the 205 persons from 2001 to 2010.

The group urged the new government to stop the implementation of Oplan Bantay Laya, which is deemed responsible for the political killings, enforced disappearances and other human rights violations.
Desaparecidos said there should be indemnification for the families of the desaparecidos and for victims who survived abduction and torture.
It also called for the enactment of a law that will criminalize enforced disappearances, ratification of the UN’s International Convention for the protection of all persons from enforced disappearances, resumption of peace talks with the National Democratic Front of the Philippines and implementation of the Comprehensive Agreement for Human Rights and International Humanitarian Law (CARHRIHL).

“Yes we’re getting ready for something which is stronger, with an impact which should probably shake the nation,” answered Mrs. Burgos when asked by Bulatlat if they are planning to file a case against Arroyo once she steps down from power.

“We are not at liberty to discuss this for as long as we’re still preparing. But yes we are preparing for future cases,” she said.
“We are looking at many venues where we can file a case against Arroyo and her military minions. We will not let Arroyo get away with her crimes. We will ensure that she will be tried in court and be punished,” Santos added. (Bulatlat.com)