After receiving a call from his son Joselito, Jesus Zapanta, 56, did not know how to break the news to his wife Mona, 49, that their son was sentenced to death.

“I did not know how to tell Mona because I feared for her health,” Jesus told Bulatlat, but added that it was impossible to hide the news considering that he was also having a hard time facing it himself.

“I cried so hard when I learned about it. It was like someone dear to me was already dead,” Mona said, “I could not accept the situation that my son got himself into.”

Their son, Joselito, left his hometown in Mexico, Pampanga last April 14, 2008 to work as a tile setter in Riyadh, Saudi Arabia. However, after six months of working there, Joselito still did not receive his salary. In April 2008, he tried his luck by looking for another job also as a tile setter.

On May 26, 2009, his Sudanese landlord went over to his work site to ask for payment for the house rent from Joselito even if it was not yet due. The conversation turned into an argument, then to a fight. In trying to defend himself, Joselito ended up killing his landlord by hitting him with a hammer.
“He (Joselito) told me that if he did not kill his landlord, he would have been killed,” Mona said.

The Department of Foreign Affairs (DFA) should have been the first agency to know about what happened to Joselito as it is supposed to look after the interests of Filipino citizens abroad. The DFA should have also informed the family about what happened to Joselito and what the Philippine government is doing to assist him. But like many other cases of overseas Filipino workers in distress, the DFA was remiss in its duty. 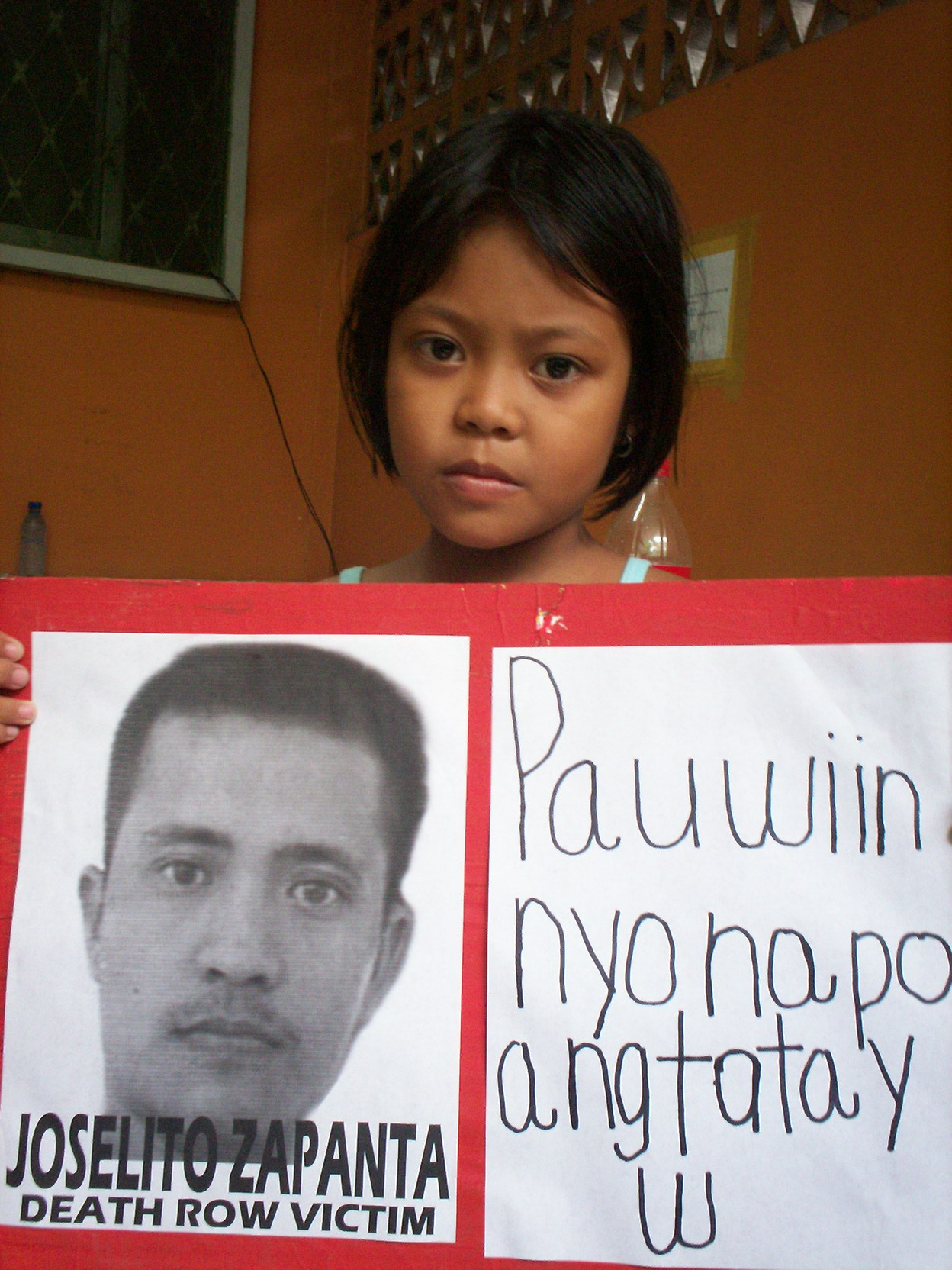 Jesus said they began worrying about their son when they lost contact with him after their last phone conversation in May 25, 2009, During their conversation Joselito promised to send money for his daughter’s 4th birthday. If it was not for Joselito’s co-worker who happened to be “online” in a social networking site, Jesus said they would not have been informed about Joselito’s plight.

On June 15, the family went to the regional office of DFA in Clark, Pampanga. The DFA officials who received them told them to return after three days as they would still ask the head office in Pasay City in Manila if they have any information on Joselito. But after three days, they were told to go to the DFA main office instead.

But when they went to the DFA main office in Pasay City, the Zapanta family were told that they should talk to the regional office in Clark for updates regarding Joselito’s case.

After their initial contacts with DFA officials, the Zapanta family frequented the DFA main office and called regularly to ask for updates on joselito’s case. Mona said ,”Either the phone line is busy or would keep on ringing. Sometimes, when an official from DFA answers the phone, he would shout at us then end the call abruptly.”

In July 2009, the Zapanta family was able to finally talk with the secretary of Milet Flores, the DFA official who supposedly handles the case of Joselito. They were told that the chances of winning Joselito’s case was strong because there were many eyewitnesses who could testify that he killed his landlord in self-defense.
Lawyer?

Since then, they asked for updates from Flores’ office. But months have passed without any letter or call from the DFA. Finally on December 22, 2009 Flores called Jesus to inform him that the Philippine embassy in Saudi Arabia assigned a lawyer to handle Joselito’s case.

In its website, DFA Undersecretary for Migrant Workers Affairs Esteban B. Conejos Jr. said they are extending all possible assistance to Joselito. “But my son said he has not received any assistance from the DFA,” Jesus told Bulatlat.

Jesus said Joselito managed to secretly call them in Pampanga at least once a month. Joselito informed them that no lawyer has ever visited him in jail. He was not even provided an interpreter when Saudi policemen made him sign and place his thumb mark in a document that he could not understand because it was written in Arabic.

“We asked for the contact number of a certain Talal, the lawyer who was supposedly hired by the embassy to represent my son, but DFA officials could not give it to me,” Jesus said, “They do not even know his first name.”

Jesus said this made him angrier. “How could they hire and purportedly pay $10,000 to a lawyer when they do not even know his complete name?”

In a statement, the Zapanta family asked the DFA to respect their right to be actively involved in saving the life of their kin, saying that the DFA has continuously kept them in the dark about Joselito’s case. The DFA, the family said, is disregarding their right to information.

“We went there last April 15, 2010 to ask for a copy of the police reports and the decision of the Court of First Instance but were told that it was not possible,” Jesus said.

The DFA said in a statement that Joselito’s case is approaching a sensitive phase and further publicity about the case may jeopardize his chances for clemency. “Following the sub judice principle, the DFA is working quietly in contacting the victim’s family and will refrain from any public discussions of the case. I urge all private interested parties to exercise circumspection in issuing public pronouncements regarding this case so as not to jeopardize ongoing efforts to save his life” Conejos said.

But for Migrante International, one of the biggest alliance of OFWs, they cannot just fully entrust this case to the government. “Under the present administration, OFWs facing grave offenses are not provided legal assistance while their families are kept in the dark and are advised not to discuss the case,” Migrante chairperson Garry Martinez said.

Migrante’s records reveal that a total of six OFWs were beheaded during President Arroyo’s term and 28 are still in death row in the Middle-East alone.

“We challenge Noynoy Aquino to fulfill his promise to run after Arroyo by making the outgoing regime accountable for the death of the six OFWs,” Martinez said. (Bulatlat.com)