Times St., QUEZON CITY—“We request Aquino to come meet us at the gates, to personally receive our letter bearing the Filipino farmers’ demands, and if he couldn’t give us much of his time, we ask that he at least personally come to his gate so we could personally hand him, just hand him, this letter—he doesn’t have to go out of the gate,” Danilo Ramos, secretary-general of the Kilusang Magbubukid ng Pilipinas (KMP), told reporters yesterday (Tuesday) in a rally before the gates of the residence of the incoming Philippine president Benigno ‘Noynoy’ Aquino Jr. at Times St.

The KMP said they drafted an omnibus letter in the name of Filipino farmers embodying their general demands. They brought it to Aquino in the hope that it could more promptly reach his attention.

Three out of four Filipinos are farmers; many of them are poor, said Ramos. Thus, he explained their demands deserve the ears and personal attention of the incoming president whose electoral platform had promised the people “change.”

But contrary to Aquino’s welcoming treatment of foreign diplomats who turned up at his gates two weeks ago with their own countries’ business and political interests, he declined to personally meet with the farmers. Instead, he just sent out two of his staff, his former Senate Staff Mar Rodriguez and political officer Grace Cabulang, to receive the farmers’ letter. (See video of farmers asking Aquino’s staff for his personal appearance at the gate of his Times St. residence below.)

Peasants from haciendas in different parts of Luzon joined the KMP in trying to personally hand their letter to incoming president Noynoy Aquino. They included farmers groups from Hacienda Yulo in Laguna, from Montalban in Rizal and from San Jose del Monte in Bulacan. But for a notably increased presence of the military in Hacienda Luisita in Tarlac and in lands in San Miguel, Bulacan being claimed by Congressman Villafuerte, the rallying peasants said they would have been joined as well by farmers from these lands in Central Luzon. Both landholdings, the peasants said, are situated near a big military camp and currently being more frequented by the military.

“Our presence here today is a clear reminder to Noynoy Aquino, a haciendero himself, to seriously address the issues that are hounding the farmers’ sector. Nine years of the Arroyo government have only benefited the landlords and even more impoverished the peasantry,” said Guillermo Bautista, chair of the peasant group KASAMA (comrade) from Southern Tagalog. 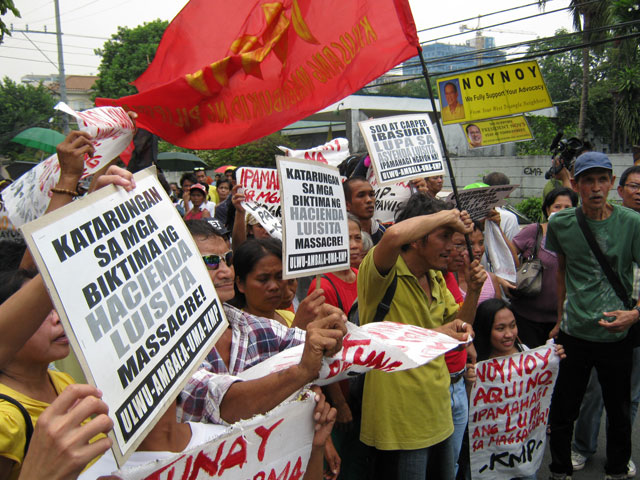 “To strengthen this country, the new (Aquino) administration must learn from the mistakes of its predecessor and begin the improvement of industries of rice, coconut, sugarcane and coffee for the benefit of the farmers and not the ruling few,” Bautista said.

In their letter to Aquino, the KMP called for the implementation of “genuine” land reform during his term. Demanding “free land distribution to farmers,” they also urged Aquino to put an end to “land grabbing, displacements of farmers and land use conversions” as well as corruption. The group also asked the incoming Aquino administration to seek justice for the victims of rights abuses, to pullout the military in farming communities, protect local agriculture, farmers and environment, and relieve as well as rehabilitate areas visited by calamities.

In urging the incoming president Noynoy Aquino to “immediately fulfill his promise of reforms,” KMP’s Danilo Ramos said they know “Aquino is aware that there would be no change if there is no genuine land reform in the country.” They dared him to “surpass his mother’s achievement of just passing the bogus Comprehensive Agrarian Reform Program (CARP).”

Incoming president Noynoy Aquino is the only son of the late Corazon Cojuangco Aquino, the post Edsa People Power 1 president who replaced the deposed strongman Ferdinand Marcos in 1986.

Replace the Bogus CARPer with GARB

As the Philippines approaches the first year mark of the implementation of the CARP extension with reforms or CARPer, Ramos observed that “there is a sudden surge of incidents of landgrabbing, demolition of farmers’ houses and land use conversion.”

The CARP and its “5-year rebirth CARPer legitimately permitted the conversion into a golf course and subdivision of the 7,100 hectare” Hacienda Yulo, for instance, according to Nestor Villanueva of SAMANA-Buntog ( Association of United People of Buntog), a peasant group based in Hacienda Yulo in Canlubang, Calamba City, Laguna.

In an incident last May 21, a hundred farmers of Hacienda Yulo were injured while 11 were arrested after members of the Calamba Philippine National Police (PNP), Regional PNP, Special Weapons and Tactics (SWAT) unit and private security guards forcibly broke their protest action against the land surveying of the Yulo-owned Laguna Estate Development Corp. and San Cristobal Realty Corp.

Similar struggles involving the peasant defense of their lands loom in Southern Tagalog alone, as agricultural lands with agrarian disputes are being allowed to be converted into other uses, said the KASAMA-TK. Examples include the Eton City project of Lucio Tan in Laguna and the Hacienda Looc in Batangas where only last week, Henry Sy’s Manila South Coast Development Corp. tore down 21 peasant huts, said Bautista of KASAMA-TK.

The KMP admits their demand for genuine land reform is “a long shot” in an Aquino presidency, as Noynoy comes from the big landlord Cojuangco-Aquino clan who is now once again the “leading proponent of feudalism, bureaucrat capitalism and imperialism in our society.” But the farmers’ group said they have to “drum up the peasants’ issues,” as they comprise the majority of the population and Noynoy Aquino had promised “change” while on the campaign trail. (Bulatlat.com)