Youth Groups Challenge Noynoy to be an ‘Education President’

MANILA – On their first week of classes, youth groups challenged incoming President Benigno “Noynoy” Aquino III to implement progressive reforms in education, which they said has deteriorated under the Gloria Macapagal-Arroyo administration.

“Gloria Macapagal-Arroyo will leave behind the most shameful and tragic legacy for Philippine education characterized by the lowest education spending, yearly tuition hikes, the highest dropout rate, unresolved corruption, disrespect for students’ democratic rights and freedoms and a systematic neglect of the government of the education sector,” said Kabataan Partylist Rep. Raymond Palatino in a statement.

Palatino said the youth is expecting so much from Aquino who, during his electoral campaign, vowed to make education as his priority. Aquino committed to allot six percent of the Gross Domestic Product (GDP) to education, as prescribed by the United Nations Educational, Scientific, and Cultural Organization (Unesco).

“What the youth and the country needs is an ‘education president.’ one who will decisively implement concrete changes and who has the political will to instill fundamental educational reforms,” Palatino said.

In nine years of Arroyo’s presidency, education is among the social services that have been least in the state’s priority. 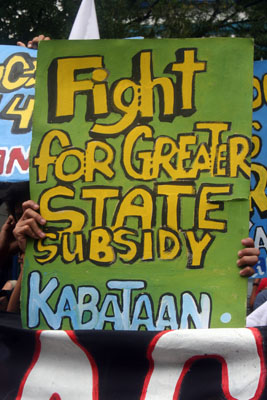 “In the 2010 national budget, the per capita allocation for education was pegged at P2,502 while debt servicing was at P7,944,” Bayan secretary general Renato Reyes Jr said in a statement. With this, the lack of government support for education has resulted to the decline in the net enrollment rate in elementary schools. Reyes said there has been a decrease of 87.11 percent in the enrollment rate in school year 2004-2005 to 85.12 percent in 2008-2009.

”For so many years, the government has failed to regulate tuition increases because of the Education Act of 1991 which grants free rein to school-owners to hike their tuition, consistent with the policy of deregulation,” Palatino said.

“Noynoy won under the slogan that he is the opposite of Arroyo. Now he is proclaimed winner in the presidential polls, he should make sure that he will not become like Arroyo,” National Union of Students of the Philippines national president Einstein Recedes said.

NUSP, along with other youth groups allied with Kabataan Partylist, called on Malacanang to implement a three-year moratorium on tuition and other fee increases in all levels. Since 2001, the national average tuition rate increased by 89.39 percent, from P230.79 to P437.10 last school year.

The youth groups also urged the new administration to uphold democratic rights of students. Specifically, the College Editors Guild of the Philippines (CEGP), an alliance of tertiary student publications, called for respect for campus press freedom.