GRP, NDF Hope to Have Peace Talks in the Next Administration

By GRACE S. UDDIN
Davao Today
With reports from Bulatlat.com

DAVAO CITY—Representatives of both the Government of the Republic of the Philippines (GRP) and the National Democratic Front of the Philippines (NDFP) are hoping that the stalled peace talks between the government and the communist rebels will resume under the new administration of President-elect Benigno Aquino III.

“With the new government, there is hope (in resuming peace talks),” said Paulynn Sicam, representative of the GRP panel secretariat, during a forum sponsored by the Bishops Ecumenical Forum (BEF) two days after the elections.

Sicam recalled the April 22 speech by Aquino during a peace and security forum in Manila at the height of the campaign. “We must revive the peace process on the basis of a comprehensive understanding of the root causes of the conflict,” Aquino said in the forum. 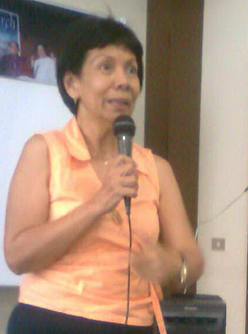 Paulyn Sicam, representative of the Government of the Republic of the Philippines panel secretariat, during the Ecumenical Bishop’s Forum on peace prospects. (Photo by Davao Today / bulatlat.com)

“The absence of a clear national policy and coherent strategy for peace negotiations led to confusions and false expectations across the table,” Aquino said.

Sicam said these were clues that Aquino is interested in talking peace.

Aquino said his administration will resume the quest for peace and restore confidence in the peace process with transparency and participation from the stakeholders.

But Sicam said there should be a louder voice from the people so that the new government will hear the people’s clamor for the resumption of the peace talks and how to go about it. She said the clamor is still on the procedural process of resuming talks on the table and not yet on the agenda of the peace talks which included socio-economic reforms.

At the forum, the participants from different religious groups suggested the creation of permanent members of the GRP panel so that the members do not change whenever there is a new administration. Sicam said the suggestion was similar to the one recommended by former Justice Secretary Silvestre Bello who ran for senator.

The participants also suggested that soldiers should be taught about the Comprehensive Agreement on Respect for Human Rights and International Humanitarian Law (Carhrihl). The religious leaders said human rights violations by the military against civilians have been one of the problems submitted to the Joint Monitoring Committee (JMC).

Sicam said they are already conducting an information drive about Carhrihl in the military. She admitted, however, that they are having a hard time because the military has so many members and the panel’s resources are limited.

She said the NPA’s record on Carhrihl is quite “impressive.” But this might be because the NPA is quite “small” in numbers compared to the military and the police.

Sicam urged the bishops to include those suggestions in the position paper they will submit to Aquino as peace advocates who want to call for the resumption of peace talks. She said the first 100 days of the Aquino administration is the best time to push for the agenda and set the groundwork for the talks.

Marissa Dumanjog-Palo, head of the secretariat of the NDFP nominated section of the GRP-NDFP Joint Monitoring Committee, said they are always hopeful despite the obstacles they encountered in pursuing the peace talks. She cited the Carhrihl as one of the fruits of the peace talks between the GRP and the NDF.

Who would have thought the Carhrihl would be forged?” she asked, “Carhrihl itself is hope.” Palo said it is true that only the GRP and the NDFP signed Carhrihl but it was actually a triumph for the Filipino people.

In an interview with Liberation International, Jose Maria Sison, NDF chief political consultant, said that “there is yet no sign that Aquino is serious in pursuing peace negotiations with the NDF.”

“…[D]uring the electoral campaign, Noynoy Aquino made a 4-point speech on security and peace, which echoed the US Counter-Insurgency Guide and presumed peace negotiations as a dispensable tool for destroying, coopting or rendering the revolutionary forces inconsequential,” Sison said.

Sison added that it remains to be seen whether Aquino’s regime is willing to comply with The Hague Joint Declaration and other major agreements. The 1992 agreement laid down the conditions and progress of the peace negotiations.

Sison added that the release of political prisoners will certainly create favorable conditions for the resumption of the GRP-NDF peace negotiations. (Grace S. Uddin/davaotoday.com with reports from Bulatlat.com)