Book Review: “Ka Bel”: The Man Who Embraced the Trade Union Movement Till His Death

MANILA — The book “Ka Bel: The Life and Struggle of Crispin Beltran” is a must-read for everyone. Every page engages the reader and makes one examine the purpose of his/her own life.

Ina Alleco Silverio ’s description of Ka Bel during the book launch is very fitting for a man who dedicated the best years of his life to serving the working masses. Silverio described Ka Bel as a good man who lived his life with the constant desire to help others.

Ka Bel was not merely a product of his time. As a selfless individual, he responded to the challenges that he faced in society without regard for his own safety. Not everyone, especially at a very young age who lived during the Japanese occupation, would willingly serve as a courier for the Filipino revolutionary forces. During the Marcos dictatorship, Ka Bel was among those who stood up to fight tyranny. When the military went after him because of his leading role in the growing trade union and strike movement then, he opted to bear arms to fight the dictatorship in the countryside. When he served as a congressman for three consecutive terms (as representative of Bayan Muna and Anakpawis), Ka Bel’s integrity remained unblemished by graft and corruption. In fact, he entered the halls of Congress a poor man, and left it in death also as a poor man.

How he dealt with such poverty is in itself very inspiring. He practically sent himself to school and worked as a driver to support his siblings. It is the same poverty that compelled him to join the progressive trade union movement and made him participate in the fight for genuine change.

There are many lessons that can be drawn from Ka Bel’s life but the most striking is his humility and conscientiousness. He was not the type of a leader who would impose from above and issue orders. He would not bother others to do things for him, a trait not all leaders have. He was always easy to approach. For him, no one was unimportant. 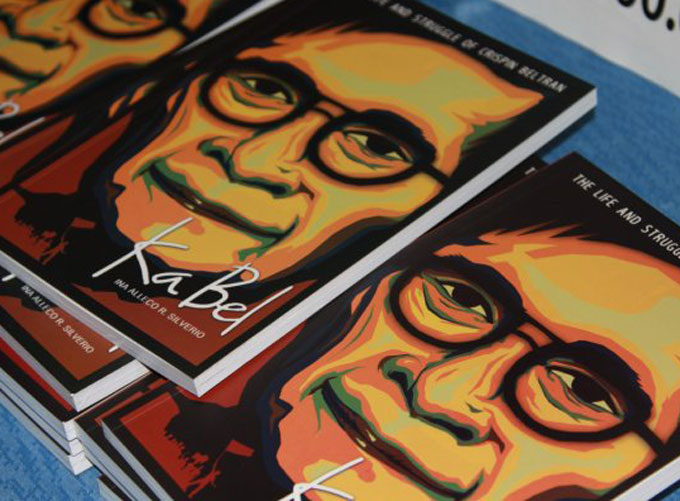 Colleagues find it hard to match his conscientiousness, the book reveals. While he was knowledgeable on many things because of his voracious reading and rich experience, he was not one to portray himself as all-knowing. His discipline and constant willingness to learn are some of the things that younger generations of activists need to emulate.

One could not help but admire Ka Bel’s wife Ka Osang and their children. During moments of hunger and want, Ka Osang persevered to help Ka Bel feed their children. Ka Bel’s children never complained and tried to understand what it meant to have a labor leader as a father. While these episodes break one’s heart, they show the greatness of his family.

Ka Osang’s transformation is in itself a good story — from being a teenager who escaped from her aunt to being a wife of a labor leader to being a partner and comrade of Ka Bel. Ka Osang’s love for Ka Bel and their children has been the source of her courage, even made her risk her life so that Ka Bel could escape from prison.

The book does not portray Ka Bel as a perfect man. The inclusion of Ka Bel’s weaknesses makes the readers look at Ka Bel as an ordinary man who was able to transcend and correct his mistakes.

Who would have thought that he had almost become a student of the Philippine Military Academy (PMA) and a boxing champ?

Undoubtedly, no one could better write Ka Bel’s biography than Silverio who had worked with Ka Bel for many years. Silverio’s writing makes the reader see, hear and feel Ka Bel and be touched by his life and struggles. (Bulatlat.com)