Sister Diane Cabasagan, RGS, Pagbabago convenor, said Aquino’s top concerns for Mindanao should include meaningful reforms for its economy, particularly for farmers and workers; the pursuit of justice and peace through peace talks and human rights; national sovereignty against US intervention and respect and promotion of the right to self-determination of Moro and Lumad (indigenous) peoples.

Cabasagan also said that the six agenda should also include the protection of the environment and the pursuit of people empowerment and good governance.

“Mindanao is the second largest island (in the Philippines) and is the richest in terms of natural resources,” Cabasagan said. Despite this, however, Mindanao has the poorest regions in the country.”
“There is also the discord brought about by the Moro’s long running struggle for self determination and the presence of foreign soldiers because of the Visiting Forces Agreement (VFA),” she added. 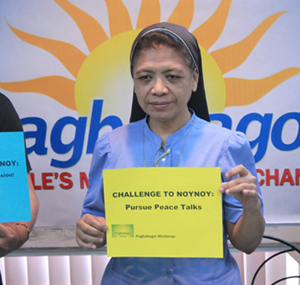 Sister Diane Cabasagan, one of the convenors of Pagbabago, explains that Mindanaoans have unique needs that should be addressed by incoming President Noynoy Aquino within his first 100 days.(Photo by davaotoday)

Cabasagan urged Aquino to grant the farmers’ long clamor for genuine agrarian reform and to protect rural communities from displacement because of massive land conversion.

She also raised special concern over the rights of workers in banana and other fruit plantations in the Davao provinces, the tuna industry in General Santos and the overseas Filipino workers (OFWs) in Mindanao.
Cabasagan also called for a probe of the human rights abuses perpetrated by members of the US armed forces in Basilan and Zamboanga and for the indemnification of all victims of abuses of human rights. “Cases should be pursued against human rights violators,” Cabasagan said. “Retired Gen. Jovito Palparan, (the former military official whose name has been tagged behind the extrajudicial killings of activists), must be made to answer for their crimes,” she said.

“(The new president) should not agree to another Oplan Bantay Laya program by the military otherwise, he will be no different from (President Gloria) Arroyo,” she added.

Pagbabago expressed hopes that the new administration will respect and promote the right to self-determination of the Moro and Lumad (indigenous) peoples. The vested rights of Lumads to their ancestral domains should prevail over the privileges granted to mining companies, coal power plants, eco-tourism parks, and other projects that displace and marginalize the Lumads and the Moro, Pagbabago said in a statement.

Pagbabago also said a just and lasting solution to the Mindanao problem will start if both parties comply with previously signed agreements.

Cabasagan said Pagabago wanted a stop to large-scale mining, logging, land use and crop conversion, coal fire power plant and other large-scale capitalist ventures. She said large tracts of forests still remain in Mindanao and large deposits of deuterium, touted to be the world’s most efficient fuel, have been found in Surigao and the Liguasan Marsh. She said all applicants of open pit mining should be rejected after the negative effects seen in Surigao and Pagadian.
Finally, Pagbabago urged on Aquino to pursue people empowerment and good governance. The group called on the incoming president to engage the peoples of Mindanao, the poor marginalized sectors into active participation in policy making and to disengage from “patronage politics that favor the elite.”