MANILA – Journalists who formed the panel of discussants during the recently-concluded Jaime V. Ongpin Journalism Seminar (JVOJS), june 24, related that the old electoral problems such as vote, buying, violence, and the stranglehold of political dynasties still plagued the May 2010 elections. However, they also noted that there were some positive changes that give the people hope.

The JVOJS, which had the theme ” “Issues and Problems in the Coverage of the 2010 Elections.”was held through the efforts of the Center for Media Freedom and Responsibility (CMFR). The JVOJS was designed as a forum to bring together media practitioners, civil society representatives and journalism faculty and students.

The nine who were cited for their work and constituted this year’s panel were Dino Balabo of Mabuhay and Philippine Star, Nina Cabaero of Sun Star Network Exchange, Kara Patria David of GMA Network, Ed Lingao of Philippine Center for Investigative Journalism, Tonette Orejas and Alcuin Papa of Philippine Daily Inquirer, Darwin Wally Wee of BusinessWorld and Benjie Oliveros of Bulatlat. Anthony Taberna of ABS-CBN was invited but did not attend the seminar. 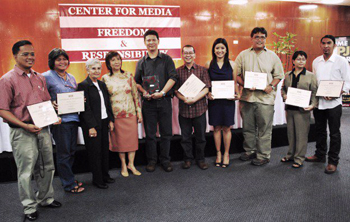 The panelists noted that while the automated election system hastened the counting of votes and unburdened the teachers who formed the Board of Election Inspectors from this grueling task, it did not solve the old electoral problems. Cases of vote buying and electoral violence were still monitored by the journalists. Orejas of the Philippine Daily Inquirer said that she was able to monitor a lot of these old problems in her coverage of the elections in Central Luzon. A journalism student of the University of the East added that he read a report from Katribu Party-list that in Mindoro, the ballots given to some Mangyans were pre-shaded.

Also, CMFR Executive director Melinda Quintos De Jesus who moderated the panel discussion, pointed out that the same old names, and the same old political dynasties won in the elections.

The media is partly to blame for this, said Nini Cabaero of Sun.Star Network Exchange. She gave as an example the fact that ousted president Joseph Estrada got the second highest number of votes in the presidential race. She said the media was not able to explain well the corruption charges filed against Estrada and why he was convicted of plunder. Alcuin Papa of the Philippine Daily Inquirer noted that the media covered those who were already prominent.

Benjie Oliveros of Bulatlat also pointed out that there is still a lot that needs to be changed in the character of Philippine politics, which is personality-oriented. “Politicians focused more on name-recall and catchy slogans'” said Oliveros. He said the fact that to run an effective election campaign, one should spend millions or even billions already give s those with resources, the old political families, an undue advantage. The other option for candidates, he added, is to get contributions from interest groups. This, he said, would then limit the ability of candidates to articulate clear platforms and programs. Oliveros said that based on Bulatlat’s analysis of news reports and websites of presidential candidates, only the tail-enders namely Nicanor Perlas, Jamby Madrigal, JC delos Reyes and to some extent Richard Gordon who had clearer platforms, yet received very scant exposure from dominant media. And because they do not have a lot of resources, the political ads of the frontrunners put them more at a disadvantage, he said.

Journalists also admitted that the senatorial and partylist elections were hardly covered by the dominant media. Papa said that this made it easier for re-electionists and popular candidates such as Ramon Revilla Jr and Lito Lapid to win.

Kara Patria David of GMA Network noted that despite the old problems and the glitches of PCOS machines, it was inspiring to see the people’s determination to vote and the sacrifices made by teachers who served as Board of Election Inspectors. David cited the report by Bulatlat and Kodao Productions reporter Raymund Villanueva that showed teachers protecting Precinct Count Optical Scan machines during a shooting incident inside a polling precinct in Tugaya, Lanao del Sur.

David noted that unlike in previous elections when most people chose to vote on the last minute, during the 2010 elections, people lined up at polling places as early as 5:30 a.m. “I felt really proud that Filipinos were going out to vote,” she added.