You Are Here: Home → 2010 → July → 4 → Peasants in Mendiola Camp-out, First Victims of Violent Dispersal Under the New Government

Peasants in Mendiola Camp-out, First Victims of Violent Dispersal Under the New Government

MANILA – Forty two peasants, students and minors were jailed, 16 were brought to the hospital for treatment of injuries and many others were hurt during the violent dispersal July 3 of the people’s camp in Mendiola, only a few paces from Malacañang Palace. One of the protesters Abby Tayag of the National Network of Agrarian Reform Advocates Youth was hit by a truncheon behind her ears, which left her bleeding.

“Our calls were legitimate,” Axel Pinpin of Katipunan ng mga Samahang Magbubukid sa Timog Katagalugan ( Kasama -TK or Confederation of Farmers’ Associations in Southern Tagalog) told Bulatlat. “We have a receiving copy of the peasants’ demands and agenda for the new administration. We were just waiting for him in Mendiola.”

The Kasama-TK and other peasant groups, including farmers from Hacienda Luisita, marched to Mendiola on June 30, the same day that Benigno Aquino III was inaugurated as president. The peasants wanted to personally present their calls to the new administration but were denied entry to Malacañang . “It seems that he (Aquino) forgot to mention anything about land reform during his inaugural address,” Pinpin said.

Thus, the peasants decided to watch over the first one hundred days of the Aquino presidency by putting up a people’s camp in Mendiola, until it was violently dispersed at around 2:00 to 3:00 p.m. of July 3. The City Engineering Department of Manila told them that they needed to “clean up” the place. 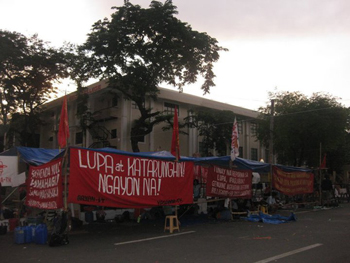 Scenes at the peasants’ camp-out in Menidola before the violent dispersal on July 3(Photo courtesy of Kilusang Magbubukid ng Pilipinas / bulatlat.com)

Reynante de Leon, vice chair of the Kabataang Nagkakaisa sa Buntod, a peasant youth group in Hacienda Yulo, said their leaders tried to negotiate with the police, but to no avail. “They pushed us and threw anything that they can get their hands on at us. They even hit us with their shields,” De Leon said, “I saw a policeman dragging a peasant from Cavite by his neck.” 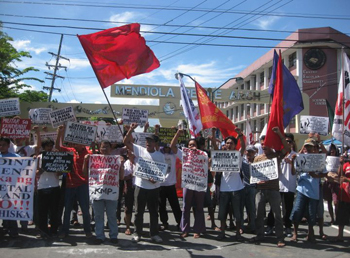 Scenes at the peasants’ camp-out in Menidola before the violent dispersal on July 3(Photo courtesy of Kilusang Magbubukid ng Pilipinas / bulatlat.com)

There were 38 peasants, students and minors who were arrested by the police. They were brought to the headquarters of the Manila Police District(MPD) in United Nations Avenue in Manila. Others who were left in Mendiola regrouped and marched towards the police headquarters. 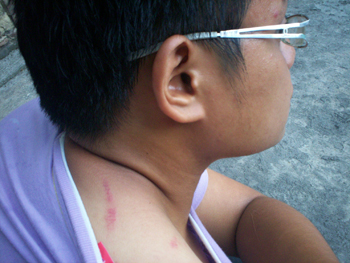 De leon said they were able to enter the police station because the MPD gate was left open. But they took more serious beating from the police when they tried to enter the building. Four more were arrested and more protesters were hurt. 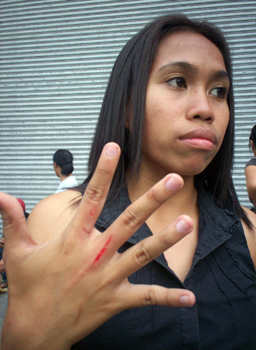 “We wanted to check the conditions of our comrades,” Pinpin said, “We were told to move away from the police station but they started hitting us again as soon as we turned our backs.” 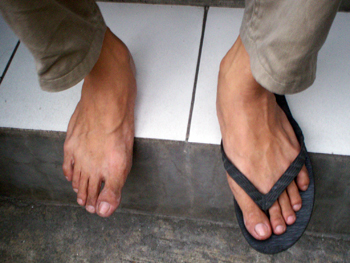 Axel Pinpin of KASAMA-TK lost one of his slippers during the dispersal.(Photo by Janess Ann J. Ellao / bulatlat.com)

As of this writing, the peasants who were jailed would be charged with obstruction of traffic and littering. “Too political?” Pinpin asked in a sarcastic tone, “They were jailed because of their political beliefs. And putting them behind bars would not answer their calls.”

“We have more reasons to continue our 100-day camp out,” Pinpin said, adding that they will continue watching the Aquino presidency’s first 100 days. (Bulatlat.com)