Aquino Urged to Free ‘Morong 43,’ Especially the Pregnant and Sick

MANILA -– Relatives and supporters reiterated on Tuesday their call for the freedom of the health workers dubbed as the Morong 43, especially the pregnant and ailing detainees.

The 43 health workers were arrested on Feb. 6 in Morong, Rizal, by virtue of a search warrant against a certain Mario Condes who has never been found. The 43 were slapped with common crimes and were held under military captivity for almost three months. The Morong 43 are now detained at the Taguig City Jail in Camp Bagong Diwa.

Dr. Sylvia dela Paz, an obstetrician, examined the two pregnant women in jail last May 16. She said that Oliveros is at risk for preeclampsia or hypertension in pregnancy, which could make her delivery difficult. Castro, on the other hand, had a previous cesarean delivery.

“I’ll let them out to a new environment, away from prison condition,” dela Paz said in a press conference Tuesday morning. “Although it is not a disease, pregnancy is a special condition. They need ultrasound, tetanus toxoid, blood exam, balanced diet and space for exercise, all of which are impossible in detention.”

Dela Paz said that the two women are anxious due to their continued detention.

“At this point, medical and health issues should outweigh all the legalities of the custodial detention. They must be released under humanitarian considerations to show that the state at least have respect for human rights,” said Dr. Julie Caguiat, spokesperson of the Free the 43 Health Workers! Alliance.

Caguiat said that for five months now, the health workers have suffered long enough. “Although, they are no longer subjected to physical and psychological torture inflicted by the military in Camp Capinpin, their present conditions of being detained under false charges and being away from the their families and people they serve remain an ordeal,” Caguiat said. 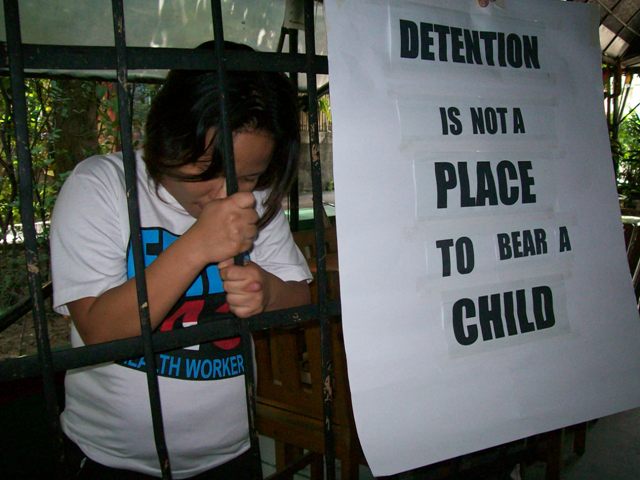 An activist simulates the condition of the pregnant members of the Morong 43. (Photo by Ronalyn V. Olea / bulatlat.com)

Caguiat said that the present detention of the female detainees is cramped and damp making the pregnant women and the rest of the detainees susceptible to infectious diseases.

Caguiat recalled that President Noynoy Aquino’s father Benigno Aquino II, who was then a political prisoner under Marcos dictatorship, was himself allowed to have an emergency bypass operation for humanitarian reasons.

The dismal conditions of the detention have also in fact been identified as a trigger to the epileptic seizures of Jane Balleta, Caguiat said.

Jane was confined at the Philippine General Hospital from June 11 to 17. “She underwent eight series of seizure attacks, the worst so far in the history of her illness,” said Balleta’s mother, Ofelia.

“My daughter’s illness would not be cured unless she is freed,” Mrs. Balleta said. She added that before detention, Jane had less frequent and milder seizure attacks.

Caguiat said Jane has also been diagnosed of anxiety depression.

“Although she keeps on telling me that she is okay and puts up a strong façade, deep inside, depression hits her,” Mrs. Balleta said, noting that Jane’s grandfather, the late labor leader and Anakpawis Rep. Crispin “Ka Bel” Beltran, also took medicines for depression at the time of his detention at Camp Crame.

“I think depression is common among those who are detained without sins,” Mrs. Balleta said.

“Freedom is the best medicine not only for Jane but also for the rest of the detainees,” Mrs. Balleta said.

Meanwhile, political prisoners detained in Cebu held a one-day fasting in support of the Morong 43.

From 5:00 a.m. until 11:00 p.m., political detainees Ramon Patriarca, Albert Acerdin of Danao City Jail and Jigger Geverola, at Camp Lapu-Lapu, suspended their regular meals and fed themselves biscuits and water instead.

“We launched this sympathy fast to demand to the newly installed president Benigno Aquino III the immediate release of the Morong 43 and all the 212 political prisoners across the country,” Geverola said in a statement sent to Bulatlat.

Geverola said that Dr. Alexis Montes served several urban poor communities in Cebu. “Because of his intense desire to help those deprived of their right to proper medical treatment and health care, Cebuanos, especially those in the urban poor communities, loved Dr. Montes. We cannot fathom why the state through the Armed Forces of the Philippines and Philippine National Police consider this noble act a threat to national security,” said Geverola. (Bulatlat.com)