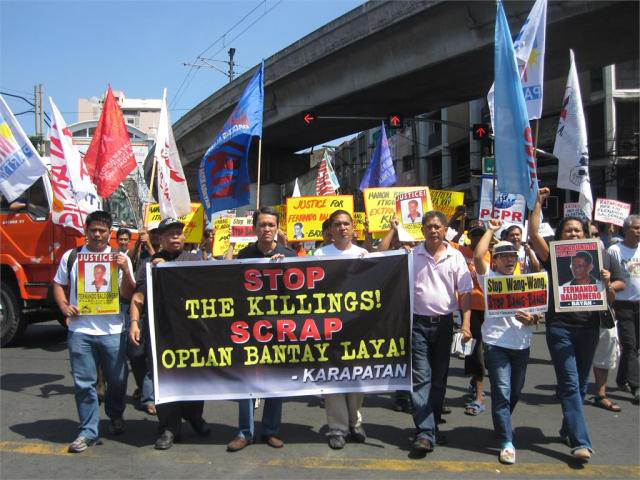 MANILA — Progressive groups today marched to Chino Roces Bridge (formerly Mendiola Bridge) to demand justice for Fernando Baldomero, the first activist killed under the new Aquino administration. Baldomero, a Bayan Muna provincial coordinator of Aklan, was shot yesterday by motorcycle-riding men, in front of his house in Estancia, Kalibo, Aklan, while preparing to bring his son to school. He suffered three gunshot wounds in the head.

“Today we march for justice. Fernando Baldomero should be the first and last activist to be killed under the Aquino regime. Not one more activist killing. That is our challenge to the new President,” said Bagong Alyansang Makabayan (Bayan) secretary-general Renato M. Reyes Jr. 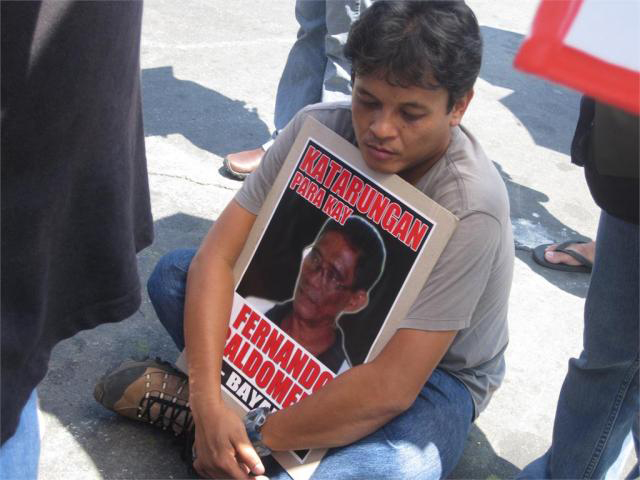 Bayan also blamed the Arroyo regime’s counter-insurgency program for the spate of killings in the past years. The group challenged President Aquino to order the relief of military commanders in areas where the killings of activists take place and for the prosecution of military officials involved in human right cases.

“The reason why the climate of impunity remains is because no one has been made accountable for the hundreds of killings that have taken place in the past years. The failure of Arroyo to protect human rights will be a failure of Aquino, too, if he does not act swiftly to stop the killings,” Reyes said.

“It doesn’t make sense to increase the size of the military when there are so many abuses being committed by state security forces. The government will merely be increasing the number of oppressors of the people,” Reyes added. 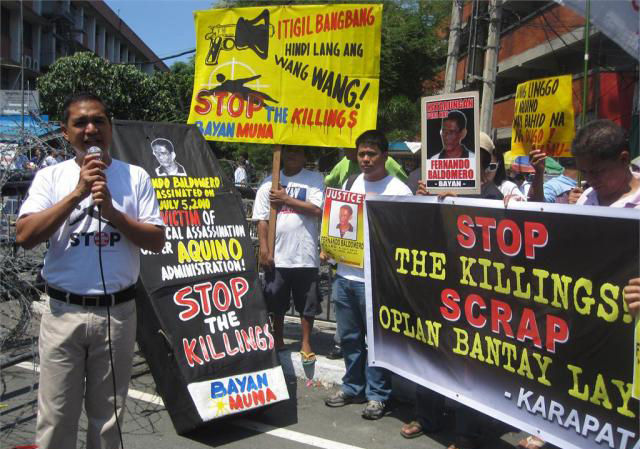 Bayan Muna party-list Rep. Teddy Casiño strongly recommended that the Truth Commission being formed by the Aquino administration “should focus on cases that really need fact-finding, like the extrajudicial killings (EJKs) of activists and journalists, rather than cases that have already been extensively investigated like the graft-ridden NBN-ZTE deal, the fertilizer fund scam and the Hello Garci controversy.”

“These cases should be the last under the Aquino administration. The case of Baldomero will be the litmus test that will determine if Pres. Noynoy’s promise of justice for all is for real or an empty promise. He must address this immediately and scrap Oplan Bantay Laya that gives license to the military and the death squads it sponsors to demonize, harass and kill activists,” Casiño said. (Photos courtesy of Bagong Alyansang Makabayan/Bulatlat.com)