According to reports, Rosales is the choice of President Benigno S. Aquino III but her appointment papers have yet to be released.

Enriquez, a victim of the abuses during martial law, accused Rosales of creating divisions among the martial-law victims by agreeing to a compromise settlement with the Marcoses and establishing a separate group of victims that would, Enriquez said, choose “monetary settlement over justice for the entire class.”

Enriquez also described Rosales’s performance as then chairperson of the Committee for Human Rights at the House of Representatives as “dismal” and marked with “prejudice against victims affiliated with Karapatan and its network.” This, Enriquez said, will taint, if not diminish, the independence of the CHR.

In a separate statement, the labor group Kilusang Mayo Uno said Rosales merely sat on hundreds of resolutions seeking investigations into extrajudicial killings since 2001 when she was chairperson of the House Committee on Human Rights during the 13th Congress. 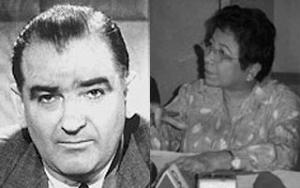 Red-baiting US senator Joseph McCarthy and Etta Rosales; Birds of a feather.

Enriquez said Rosales will not be able to earn the trust, confidence and cooperation of the victims and human-rights organizations affiliated with Karapatan.

“Why appoint Akbayan party-list chair emeritus Etta Rosales, who has sounded like military butcher Jovito Palparan in linking legal progressive groups to the Communist movement, to the Commission of Human Rights?” KMU said in a separate statement.

The labor center noted that Rosales has echoed the military’s arguments in dismissing the extrajudicial killings of activists and civilians under the Arroyo regime as mere result of “internal purging” among communist ranks, and that legal progressive organizations are linked to the Communist Party of the Philippines and its armed wing, the New People’s Army.

“Appointing her [Rosales] to the commission, which should solve the killings with impartiality, is highly unreasonable, if not insane,” said KMU executive vice-chairman Lito Ustarez.

Ustarez recalled that during the visit of Philip Alston, the United Nations’ special rapporteur for extrajudicial killings, to the country in 2007 to investigate the human-rights violations under Arroyo, Rosales echoed the military’s line that the killings were part of the “purging” allegedly being undertaken by the CPP.

In 2004, Rosales’s partymates in Akbayan accused the KMU, the Kilusang Magbubukid ng Pilipinas (KMP), the Cordillera People’s Alliance (CPA), Migrante, among others, “as groups that are associated or working closely with the CPP.”

In January 2007, Rosales and Akbayan party-list released a statement asserting that “Bayan Muna continues to express sympathy toward the NDF.”

“Such McCarthysist red-baiting is what the military uses to legitimize the black propaganda and brutal killings that it undertakes against members of progressive party-lists and people’s organizations,” Ustarez said.

KMU said it would campaign to block Rosales’s appointment to the CHR. “The Commission on Human Rights right now needs someone who has the resolve to hold the perpetrators of extrajudicial killings liable. Rosales clearly does not have that resolve. What she has is her fervor to link progressives to the CPP-NPA-NDF.”

“If you are going to appoint her, you might as well appoint someone like Norberto Gonzales or Palparan,” youth group Anakbayan told Aquino in a statement, referring to retired general Jovito Palparan.

Gonzales, former chief of the National Intelligence Coordinating Agency (Nica), has been vocal in maligning partylist groups and people’s organizations as fronts of the CPP. As part of the then Inter-Agency Legal Action Group (IALAG), Gonzales also led the filing of trumped-up charges against critics of the Arroyo government.

Palparan, on the other hand, has been branded as “The Butcher” due to the trail of blood he left behind in areas where he was assigned. At the congressional hearings on extrajudicial killings, Palparan mouthed the same line as Akbayan.