Aquino Urged to Respond to the Needs of the Urban Poor

MANILA — The Payatas tragedy is etched forever in the heart and mind of Efren Malanao, 60. He witnessed the mountains of garbage in Payatas dumpsite in Quezon City topple down and bury his neighbors’ houses on July 10, 2000.

“I was walking around the dumpsite looking for tires I can sell when I noticed that the garbage I am walking on is too soft,” Malanao told Bulatlat, “The garbage started moving. And I ran for my life. I saw how it crashed into my neighbors’ homes in less than five minutes.”

Ten years later, he is marching under the scorching heat of the sun toward Mendiola, only a few paces from Malacanang. He is now an activist. And he wants justice to served.

Malanao thought that the Payatas tragedy would serve as a reminder to the Philippine government that servicing urban poor communities, especially those in high risk areas , needs to be a priority. But nothing much changed in their living conditions. Malanao said it even worsened. 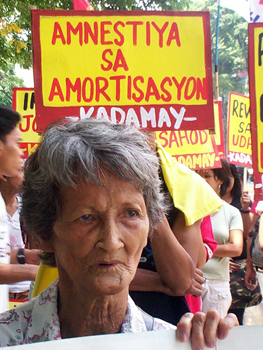 Nanay Mameng of Kadamay warned Aquino not to be like Arroyo (Photo by Janess Ann. J. Ellao / bulatlat.com)

Together with Kadamay, an urban poor group, Malanao marched toward Mendiola on July 10, 2010, 10th year anniversary of the Payatas tragedy, to urge President Benigno Aquino III to listen and respond to their immediate needs. They submitted their four-page demands through Aquino’s Presidential Management Staff.

“We call for justice for the victims of the Payatas tragedy and to all urban poor communities,” Kadamay vice chair Carlito Badion said, “But justice would only be served if poverty would be eradicated.”

The urban poor group believes that immediate job generation through infrastructure building for social services and industrialization is one effective way to mitigate poverty. This includes building more classrooms and educational facilities, clinics and health centers, and housing projects under the Housing and Urban Development Coordinating Council, flood control and irrigation system, roads and bridges.

“These are some of the infrastructures that we need. If the government would seriously address this, they would not only provide job, they would implement a genuine development program for our country,” their agenda reads.

Kadamay also urged the Aquino government to provide protection and support to workers, especially those who are working in the informal sector such as vendors, drivers and porters. They are also pushing for the P125 ($2.70 at an exchange rate of $1=P46.25) across the board wage increase being proposed by progressive party-list groups in the House of Representatives, and being pushed by progressive unions.

The group also called for the extension of the coverage of the Pantawid Pamilyang Pilipino Program (4Ps). Currently, only one million families are being covered. The 4Ps is a poverty reduction program under former president Gloria Arroyo that supposedly provides grants to extremely poor households to improve their health, nutrition and education especially to children aged 0-4.

But Kadamay said so far, the 4Ps had no significant effect on the eradication of poverty in the country. They said it is too limited and could probably become a source of corruption.

With this, they urged Department of Social Welfare and Development secretary Dinky Soliman to conduct dialogues with concerned sectors on how they could improve the coverage of the 4Ps.

Another form of relief that Aquino could give to urban poor families, said Kadamay, is to implement a price freeze especially on basic necessities such as food. This include selling the P18.25 ($0.39) per kilo rice from the National Food Authority in the public market. They also urged the government to push for programs that would lead to national food security.

Kadamay also said there is a need to scrap the Expanded Value Added Tax and the Oil Deregulation Law.

The group called on the Aquino government to review Republic Act 7279 or the Urban Development and Housing Act. They saidthey noticed that in many cases, “temporary resettlement and financial assistance,” stipulated in Section 28 of the law, is almost always violated in times of demolitions.

With this, Kadamay said there is a need to review big “urban development projects” under Arroyo that displaced so many urban poor families. This include the Payatas Estate Area Development and Port Modernization Program where 150,000 and 100,000 homes were demolished, respectively.

There is also a need to grant amnesty to the amortization of government housing facilities such as in relocation communities, Community Mortgage Programs and Housing Loans.

Kadamay also called on the government to rehabilitate communities that were devastated by Typhoons Ondoy and Pepeng and the recent El Nino. The group said there is a need to pull out the military units deployed in many poor communities in Metro Manila.

Carmen “Nanay Mameng” Deunida warned that if the Aquino government would not address their needs, she would be among the very first to denounce the newly-installed government. “Do not be like Gloria,” she said. (Bulatlat.com)