DAVAO CITY— When he left home in Ipil, Zamboanga Sibugay to work as a Bahasa interpreter for the US troops, Gregan Cardeno had big dreams for his family.

“He was thinking of sending the children to school and putting up a small business at the end of his three-month contract,” said Cardeno’s wife Myrna in a forum.

But Cardeno never had the time to realize those dreams. He was discovered dead inside his room in the Joint Special Operation Task Force (JSOTFP) military headquarters barely two days in his job.

“It was very fast,” Myrna recalled, “He left for Maguindanao on February 1, he called me on February 2 and on February 3, he was dead.”

Cardeno’s unexplained death while working for the US troops in February and the death of the Philippine Army officer a month later have renewed calls among militant groups to junk the Visiting Forces Agreement (VFA) between the US and the Philippines.

Both the US troops and the Philippine National Police in Marawi ruled Cardeno’s death as suicide. But his wife and family said Cardeno had sent a series of distressed calls the day before he was found dead. His wife said it was quite “unlikely” that Cardeno would kill himself. 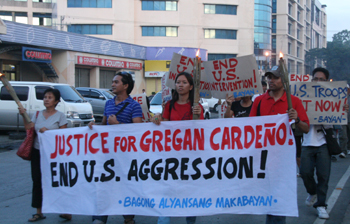 Members of progressive groups march the streets of Davao City on July 3 to demand justice for the killing of Gregan Cardeno, the Filipino interpreter found dead inside the US troops’ barracks in Marawi City. (Photo by Jose Hernani/davaotoday.com / bulatlat.com)

She said Cardeno can understand Malay because he used to work as his brother’s storekeeper in Sabah Malaysia and they also used to live there for two years after they were married. Aside from Malay, her husband also spoke the local languages in Maguindanao.

Myrna said Cardeno even held a dispedida party on January 31 before he left for his new job. On February 1, at past six o’clock in the morning, she sent Cardeno off to Edwin Andrews Air Base in Zamboanga City supposedly for Camp Siongco in Awang, Datu Odin Sinsuat, Maguindanao. But at 7:48 am, Cardeno called his sister Carivel, saying he was sent instead to Camp Ranao in Marawi city. At 2 pm, Cardeno called his sister again to say that the job was “not what he expected” and that “it was so hard.” He also called his wife Myrna two hours later, saying he was in a difficult situation.

“He was crying,” his wife recalled. “He sounded like he wanted to cry out loud but he had to stifle it,” said his wife. She said Cardeno had told her, “Will you still accept me if I go home?” and she said, “Why? Did you do anything wrong?” before the line went dead.

She said she told her husband to come home as soon as he can before the phone went dead. Cardeno learned about the Skylink Security recruitment from Captain Javier Ignacio, a close family friend from the Western Mindanao Command (Westmincom).

Ignacio had helped Cardeno’s family unravel Cardeno’s death but in March, Ignacio was gunned down by assailants on motorcycle. Indayla said Ignacio was about to meet human rights groups to execute an affidavit about what he learned about Cardeno’s case when he, Ignacio, was killed.