Related story: For FQS Veterans, Activism Is in Their Hearts

MANILA — Fresh from their highly acclaimed movie Dukot, multi-awarded director Joel Lamangan and Palanca awardee Bonifacio Ilagan team up again to pay tribute to the historic series of protest actions in ’70s and relive the untold struggles, intrigues, persecution, torture and betrayal in the movement against the Marcos dictatorship.

Sigwa (Storm) pulled everyone back to the days of the First Quarter Storm of 1970, one of the highlights of the history of the protest movement in the country. The film is Lamangan and Bonifacio’s entry to the 6th Cinemalaya Independent Film Festival.

“I have always wanted to produce a movie. And I waited for five years for a good material like this to come my way,” executive producer Pelita Uy told Bulatlat during Sigwa‘s gala night on July 10. “A movie of social relevance,” she added.

The story begins with Dolly (Dawn Zulueta, Megan Young) returning to the Philippines to look for her long lost daughter. She was a Filipino-American journalist sent to the Philippines in the 1970s to write about the rising social unrest at that time. But later, she found herself being recruited to the revolutionary and underground youth group Kabataang Makabayan. 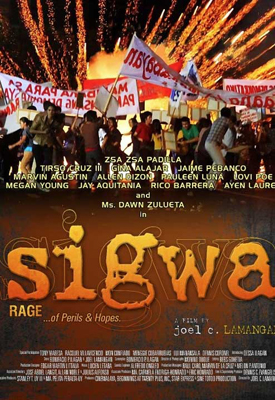 While looking her daughter, Dolly is also reunited with her fellow comrades, 40 years since they last saw each other. They were Rading (Jaime Pebanco, Jay Aquitania) an urban poor out-of-school-youth activist, Oliver (Tirso Cruz III, Marvin Agustin) an arrested student activist who later became a presidential spokesman, Azon (Gina Alajar, Lovi Poe) who grew frail and weak caused by the trauma of the rape she experienced when she was arrested, and Cita (Zsa Zsa Padilla, Pauleen Luna), once a student activist now a leader of the New People’s Army,

Tension flared as soon as Oliver came face to face with Dolly, Rading and Cita during the wake of their professor. Oliver insisted to the three that while he did not regret what he did in the past, the revolution is no longer applicable at the present.

Cita, stern and cold, told Oliver that his lack of social practice is probably why he was concluding wrongly about the movement. While Cita said she could forgive Oliver for all their personal issues — they were lovers once while in the movement — the Filipino people might not be as forgiving.

In a flashback, Dolly found out that Eddie (Allen Dizon) is a deep penetration agent who was sent to spy on their activities. He asked for Dolly’s and his comrades’ forgiveness. He then committed suicide as soon as Dolly turned her back. Dolly was pregnant with his child at that time.

Both were difficult and decisive moments for the characters to reaffirm their commitment to the people.

It would be safe to conclude that Lamangan and Ilagan did not have a hard time drafting and perfecting the film, considering that they were survivors of martial law themselves.

Bonifacio, who wrote the screenplay, said no events or characters were invented. “They are founded in history. The characters may be composites but they actually lived, and still do,” he said.

Even actors and actresses who played their roles in the film said the fact that these characters are based on real people made them accept the offer. Tirso Cruz III said the story of Sigwa made him think where and what he was doing at that time that this was all happening.

Allen Dizon, who played the main character role in the movie Dukot, said he accepted the offer because he now feels strongly about human-rights violations in country. He told Bulatlat that both films served as an eye opener for him. “I do not have intentions to go against the government. But it is my intention to share how hard it is for victims of human-rights violation to go on with their daily lives without their partners or their siblings.”

Sigwa is still screening at Cinemalaya.