Today’s latest spin-off comes in a harsher package. Aside from taking with it almost half of all PAL employees, 13 of 21 union officers, and more than three-fourths of the rank-and-file union, it threatens to downgrade their status from regular, unionized employees to probationary, non-unionized employees.

Different employees from endangered PAL departments say their current salaries would fall from 20 percent to 50 percent with the employees at airport services department (ASD) saying they are only being promised minimum wages. All would face such reduced wages at increased working hours and days.

As with the M&E spin-off, the employees suspect the incoming service-providers are either partners or dummies of the Lucio Tan Group. “Only the company name would change, our job functions would remain for PAL; there would just be a team for oversight coming from PAL. In inflight catering, for instance, a team of 26 PAL employees would be detailed to control the contractual employees,” said Benito Ignalig, an assistant supervisor, demi-chef, and union shop steward. He has worked for 20 years in PAL’s Inflight Catering. 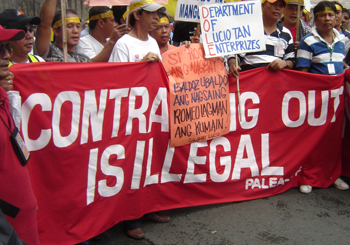 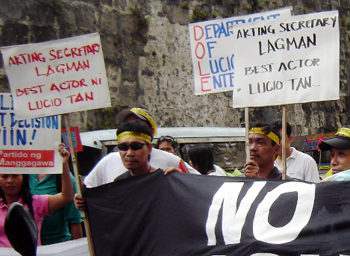 The service providers waiting in the wings are: for PAL reservation’s 172 employees, the PLDT’s call center eVentus; for ASD’s almost 2,000 workers, Sky Logistics and Cargo Logistics; and for inflight catering’s 1,000 employees, Sky Catering.

“The ‘offer,’ as per DOLE decision, is one month’s salary per year of service, one year absorbed in the new entity that would takeover, if you will sign the agreement. After one year, Sky Logistics has the option to lay you off. Workers under it will have no union,” said Danilo Palomena, senior shop steward for airport services department. Palomena has worked for 36 years in PAL. He has been terminated three times but reinstated each time because he asserted his rights.

Before Aquino’s inauguration, the union said they have been holding at least two mass actions per week involving hundreds to thousands of employees. They have also been collectively turning down efforts by PAL’s human resources department to make them agree to their termination. They asked last month the DOLE to reconsider its approval of PAL’s planned spin-off, and then drove a motorcade to Times Street shortly before Aquino’s inauguration.

This week, PAL employees anticipate a consultation with new labor secretary Rosalinda Baldoz and how President Aquino would decide the case of the flag carrier’s employees. The union feels hampered by an assumption of jurisdiction (AJ) released by the labor department on their case, as they cannot launch their usual mass actions near PAL premises, said Ronald Salazar from ASD’s central baggage services. Salazar has worked 12 years in PAL and is currently a board member of PALEA.

He admitted that their national union leaders have stopped calling for mass actions after bringing their case to Aquino and getting the president’s assurance that he would make PAL’s case “a priority.” But he said they have also been telling each other that “we could never relax, we would launch mass actions again if needed.”

“Although in a TV interview Baldoz said (Aquino) has ordered her to review and evaluate former acting Labor secretary Romeo C. Lagman’s decision, she also said that it is a management’s prerogative to resort to outsourcing,” said union senior shop steward Palomena. “We will have to watch DOLE and continue launching mass actions.” (Bulatlat.com)