As the Philippine military continues to wage Oplan Bantay Laya, its so-called “dirty war” against communists as well as activists, peasants and workers, more and more children are not only being caught in the crossfire but have become targets as well of human-rights violations.

MANILA – As the Philippine military continues to wage Oplan Bantay Laya, its so-called “dirty war” against communists as well as activists, peasants and workers, more and more children are not only being caught in the crossfire but have become targets of human-rights violations as well.

The victimization of these children range from the trauma of witnessing the murder of their parents and loved ones to being directly dragged by the Philippine military into its conflict with the communist New People’s Army, particularly in the countryside.

The most recent case is the murder of Fernando Baldomero, chairman of Bayan Muna in Aklan who, on July 5, was shot dead by assassins in front of his 12-year-old son. The two were preparing for school. Baldomero’s murder was the first extrajudicial killing of an activist under the Aquino administration.

Nearly four years ago, on July 31, 2006, gunmen ambushed Dr. Constancio “Chandu” Claver, Bayan Muna’s coordinator in Kalinga, and his wife, Alyce, as they were preparing their seven-year-old child Cassandra for school. Father and daughter survived the attack but Alyce did not. 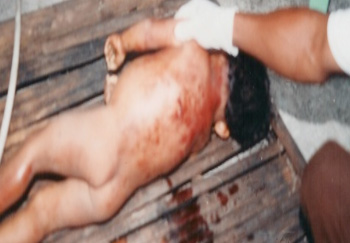 This dead child was among the victims of military operations as documented by the Children’s Rehabilitation Center. (Photo courtesy of CRC)

That same year, according to the Children’s Rehabilitation Center (CRC), a non-government institution for child victims of rights violations, Anthony Licyayo, a peasant leader of the Kilusang Magbubukid ng Pilipinas in Cagayan province, was shot dead while carrying his three-year-old son. His body was found the next day “with the bloodied child sleeping on top of his dead body,” the CRC said in a report.

These children are victims of violence in the course of the military’s counter-insurgency operations. Because they happen to be children of farmers, fisherfolk and workers — the sectors that comprise the Filipino majority and the usual target of the military’s operations — they also suffer the fate of their elders, according to the CRC.

“Children are also traumatized as they witnessed the death of, or violence against, their loved ones,” Ma. Esmeralda Macaspac, executive director of CRC, told Bulatlat.

Other children with similar experiences, said Jacqueline Ruiz of CRC, developed a phobia of the military or motorcycles like those favored by assassins. Some children grew up harboring guilt feelings, blaming themselves for the death or anguish of their parent, added Pia Perez-Garduce, former spokesperson of the child advocacy group Salinlahi.

Garduce said some children also develop insecurities or self-doubt, as exemplified by a child of one of the journalists killed in the Ampatuan Massacre who thought his parent may have been “bad” hence the attack.

In the course of the government’s anti-insurgency operations in the past nine years and a half, some 77 children have been killed, 58 survived attempted killing, another 77 were arrested and detained, four disappeared, 56 were tortured and 21 were reportedly used as guides or shields by the military, according to these reports.

Last March in Samar, a father and his seven-year-old son were fishing at a lake when 60 armed men from the 34th Infantry Battalion of the Philippine Army arrived and questioned them on the whereabouts of certain persons. While the father was being tortured — he was tied to a tree, blindfolded, a plastic bag over his head — the boy was taken away by at least 10 soldiers.

Later in the day, the soldiers brought the boy back to his father. But that was not the end of if: the two were forced to accompany the soldiers to their hut, which the soldiers proceeded to search. After that, father and son were brought to a military camp in the mountains. For two days since then, the boy and his father accompanied the soldiers in military operations to as far as Northern Samar.

Four other children in Gingoog City suffered a far worse fate. The children — aged two months, two years, five and six — were massacred with their parents, who refused to obey the orders of soldiers from the 29th Infantry Battalion to evacuate an area the military had designated as off-limits. The soldiers ignored the family’s plea that they could not leave because the mother had just given birth and they knew life in the evacuation center would be difficult. 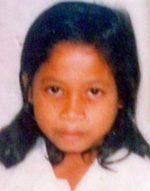 Grecil Buya was accused of being a child NPA. (Photo by davaotoday.com)

These incidents that victimized children during military operations were documented by the CRC. It estimated that from 2001 to June this year, more than 128,000 of the total number of forced evacuees in the country were children. With little food, water and sanitation, among others, life in cramped evacuation centers often forces evacuees to defy military orders and go back to their communities despite the danger.

Two teenage girls, for instance, went back to their house to fetch a few school things and stayed there briefly — but they were shot at by soldiers. Two of their adult companions died after the soldiers left them on the road bleeding from gunshot wounds. The teenagers, who had been detained, were later introduced to the media as “child NPAs.”

Based on case summaries culled by CRC from fact-finding reports of the human-rights group Karapatan, children are being harassed, threatened, tortured, arrested, detained, used as guides or shields in military operations, or, lately, being used as leverage or hostage to force suspected activist or communist parents to show up to claim their children.