Twenty armed men in three vehicles took her from her hospital room in handcuffs. She was separated from her baby. They took her away swiftly while her mother was settling her hospital bills. This detainee is not a high profile, dangerous criminal, but a health worker and political detainee.

MANILA — “I felt like I am an Ampatuan,” Carina Judilyn Oliveros blurted out as she described how the guards of the Bureau of Jail Management and Penology (BJMP) took her and her baby out of the hospital on Aug. 18.

Oliveros, one of the Morong 43, gave birth to her first child on July 22 at the Philippine General Hospital in Manila. The 43 health workers were arrested on Feb. 6 in Morong, Rizal by virtue of a search warrant against a certain Mario Condes who was never found. They were held in military captivity for almost three months before they were transferred to Camp Bagong Diwa in Bicutan. They have been charged with illegal possession of firearms and explosives.

“There were about 20 of them, all armed,” Oliveros said in describing the soldiers who took her and her baby out of the hospital. “Some were carrying long firearms. About ten went inside our [hospital] room.” Oliveros initially refused to go with the BJMP guards but she was told the court has ordered her immediate transfer to Camp Bagong Diwa.

Judge Gina Cenat Escoto of Morong Regional Trial Court Branch 78 rejected the petition filed by Oliveros’ counsels for her temporary release on recognizance due to humanitarian reasons. In a decision dated Aug. 16, the court ordered the BJMP to immediately return Oliveros to the detention facility. The court said there was no basis for granting the release. 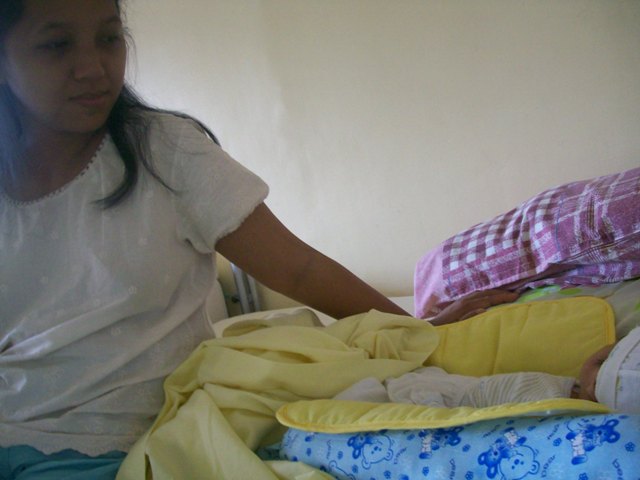 Carina Oliveros with her baby at the Philippine General Hospital. Authorities will send her back to jail anytime soon. (Photo by Ronalyn V. Olea / bulatlat.com)

“I just wanted to hold my child but they did not allow that until we got inside the vehicle,” Oliveros said.

“They handcuffed me but they did not want the public to see it. I told them, ‘Don’t cover the handcuffs.’ As I was being brought out of the room, I shouted repeatedly ‘Free the 43!’” Oliveros said. “The people looked at us. They have probably seen my picture at the posters outside the hospital,” she said.

“Why would I be ashamed? I told them I am not ashamed of what I’m doing. We, the 43, are not criminals,” Oliveros explained. She was accompanied by Fr. Dionito Cabillas of Samahan ng Ex-Detainees Laban sa Detensyon at Para sa Amnestiya (Selda) and a staff of the Health Alliance for Democracy (Head) back to Camp Bagong Diwa. Oliveros noted that the BJMP had used three vehicles to fetch her.

In a separate interview, Oliveros’s mother Sheila expressed disgust at the BJMP personnel. “They told me to arrange the hospital billing but when I came back to the room, Judilyn and my grandson were gone. They took them away and I did not even get a chance to talk to my daughter,” she said.

Oliveros said that before the vehicle sped away, she saw her mother outside the hospital lobby, crying. “I was crying, too. I knew that she felt bad that I was treated like a criminal,” Oliveros said as she fought back tears.

At the Detention Cell

Determined to breastfeed her three-week-old baby, Oliveros brought her child to the detention cell she shares with 22 other women detainees, all members of the Morong 43.

The cell was damp, overcrowded and poorly ventilated. Oliveros said there were bed mites and a big rat in their room.

She said the BJMP promised to provide her baby a separate wooden bed, but it never came.

“On our first night here, my baby found it hard to sleep. The next few days have been slightly better,” she said, adding that her colleagues help her take care of the baby. “They all wanted to kiss him and hold him. Later, we agreed that a maximum of three women may hold him for a day,” Oliveros said.

She said the jail warden told her that after a week, they would take the baby out of the detention cell. “They told me to give him to my mother or else, they would give my baby to the DSWD [Department of Social Welfare and Development],” Oliveros said.