You Are Here: Home → 2010 → August → 31 → Kin Remember Loved Ones Who Disappeared, Express Disappointment Over Aquino’s Inaction

On the occasion of the International Day of the Disappeared, relatives of victims of enforced disappearances marched to Mendiola bridge to demand that their loved ones be surfaced and the perpetrators, including former president Gloria Macapagal-Arroyo be punished.

MANILA — Sherly Pascual, 53, has been looking for her missing husband for 22 years now.

On April 7, 1988, between 4:30 p.m. to 5:00 p.m., Sherly’s husband Roberto was taken by at least four armed men in their house in Navotas. “We were fixing the house that day when they arrived. They took my husband without a word,” Sherly told Bulatlat.

Their three sons, then aged three, six and nine, also saw how their father was abducted. “Oyo, our second child, embraced his father but the men violently brushed him aside, his body slammed the wooden walls,” Sherly related.

“I was hit with the butt of a gun on the forehead,” Sherly said, pointing to a scar just above her left eye. “I followed them out of the alley but I eventually lost consciousness.” 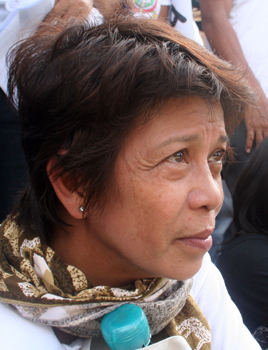 Sherly has been searching for husband Roberto for 22 years now. (Photo by Ronalyn V. Olea / bulatlat.com)

Sherly was one of the relatives of victims of enforced disappearances who marched to Chino Roces (formerly Mendiola) bridge, Aug. 30 to express disappointment over President Benigno S. Aquino III’s actions and inaction regarding human rights. Aug. 30 is the International Day of the Disappeared.

“Personally, I do not have expectations on him [Aquino],” Sherly said, adding that her husband was abducted during the administration of Corazon Cojuangco-Aquino, the president’s mother.

Sherly said it was difficult having to raise her three sons all by herself. “We went through different crises,” Sherly said.

Like Sherly, Dee, wife of Honor Ayroso who was abducted on February 9, 2002 in San Jose, Nueva Ecija, has not pinned hopes on Aquino.

“From the start, I did not expect him to do anything [to address enforced disappearances]. In the first place, he has no record of upholding human rights,” Dee told Bulatlat. 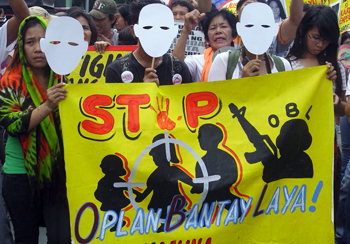 Dee noted how Aquino blamed the NPA for the Hacienda Luisita massacre. “He was saying the dispersal was NPA-infiltrated,” she said.

Dee also criticized Aquino’s statements on cases of extrajudicial killings. “He was saying that 50 percent of the killings have been resolved. What about the killings during the Arroyo administration? Is it already a non-issue?” Dee said.

Six activists have been killed since Aquino assumed presidency.

Meanwhile, JL, brother of missing activist Jonas Burgos, criticized the extension of the counterinsurgency program Oplan Bantay Laya. “We are disappointed. We all know that this counterinsurgency program is the cause of the massive human rights violations. He [Aquino] said he would not implement such policies and yet he extended Oplan Bantay Laya,” JL said, noting that his brother has been missing for 1,097 days.