MANILA — After more than four years of being off the air, a radio program for the marginalized sectors of society is back. Kodao Productions’s Sali Na, Bayan! aired its pilot episode Sept. 6 over DZUP 1602 KhZ from 2 p.m. to 3 p.m.

“The reason why we were shut down is the same reason for our coming back – that is, our striving to be the voice of the voiceless,” Raymund Villanueva, the main host of the program told Bulatlat in an interview. 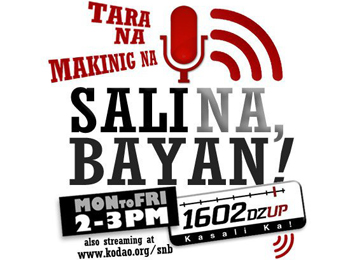 Kodao Production’s radio program is again on the air, now entitled ‘Sali Na Bayan!’ from 2 to 3 p.m. at DZUP 1602 KhZ AM radio.

Jola Diones-Mamangun, Kodao Productions executive director, related that they received several warnings from the DZRJ management, reminding them not to be too critical of Arroyo. “It could not be avoided,” Mamangun said. “All our guests called for her ouster.” Most of these guests come from the underrepresented sectors – peasants, workers, urban poor, youth, women and the like.

Ramon Jacinto, owner of the DZRJ, is the former brother-in-law of Jose Miguel “Mike” Arroyo. Jacinto’s first wife is the sister of Mike.

The five-year old Ngayon Na, Bayan! mainly hosted by veteran radio broadcaster Sonia Capio together with several others was closed down. The program was a recipient of the Golden Dove Awards as Best Public Affairs Radio Program for Metro Manila in October 2002.

Mamangun said they tried to look for another radio station but could not afford the rates.  The one-and-a-half-hour slot at the DZRJ was offered by Jacinto after the ouster of then President Joseph Estrada. Although Kodao Productions did not pay for the air time, the group shouldered all the production expenses. 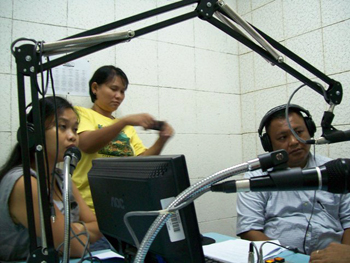 Since 2006, Kodao Productions provided content for community radio programs in several provinces such as Nueva Ecija, Tacloban City, Cebu City, among others. “For a time, we focused on video productions instead,” Mamangun said.

In 2008, Kodao Productions was tapped by the Association for the Rights of Children in Southeast Asia (Arcsea) for a radio program over DWIZ. “We provided the trainings for the children, from scriptwriting to hosting to technical aspects of the production,” Mamangun said.

However,  Kaya Natin ‘to, Kids! ran for only six months. Villanueva, who served as director of the radio program, said the air time cost was too expensive even as the program got a huge discount from the station. The average cost is around P80,000 ($1,823) per hour.

In early 2010, Kodao Productions discovered that DZUP was offering time slots. “We immediately applied for a slot but were told that the radio station was in the process of upgrading facilities,” Mamangun said. After six months of waiting, the Kodao Productions was given a one-hour program.

“We are in perfect agreement with the DZUP management that our radio program would be focused on the marginalized sectors, to be the voice of the democratic sectors in society,” Villanueva said.

Although the name has been changed, the aim is still “to serve the people,” Mamangun said.

On Mondays, Sali Na, Bayan! deals with burning national and international issues. Tuesday is allotted for issues of the workers, peasants, indigenous peoples, migrants and urban poor. On Wednesdays, the program will discuss health-related issues. Thursdays are women’s issues and Fridays are for economic concerns, human rights and media.

Kodao Productions would again practice citizen journalism. “We would tap members of grassroots’ organizations from the regions to give reports,” Mamangun said, noting that partnerships with these organizations have been the strength of their radio program.

The multi-awarded multimedia production outfit signed a three-month contract with DZUP. “We hope that it can be extended,” Mamangun said.

“It’s an honor to be the first radio program outside the UP community… We are grateful to DZUP led by Prof. Rose Feliciano,” Villanueva said.  (Bulatlat.com)