Up to now, not a single victim of human-rights violation during the Marcos dictatorship has achieved justice nor received any compensation from the government.

MANILA — Thirty eight years have passed since the declaration of martial law but the victims of human-rights abuses during the Marcos dictatorship are still calling for justice.

Veterans of the First Quarter Storm joined other protesters in a march to Chino Roces (formerly Mendiola) bridge to commemorate the dark period in the nation’s history.

The FQS of 1970 was marked by a series of giant demonstrations, mostly by students and workers, against then President Ferdinand Marcos.

“How can we achieve justice? The past governments should have already prosecuted the Marcoses if they were sincere in giving justice to us victims. But then, as we can see, they [Marcoses] even won in the May 2010 elections. Now, they are all back,” Caloy Salvador, a victim of torture during martial law, said in an interview with Bulatlat. Salvador heads the organizational department of the First Quarter Storm Movement (FQSM). 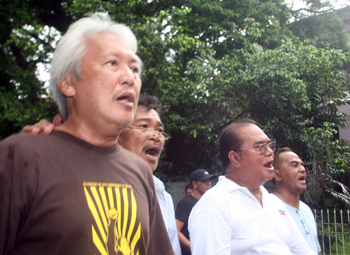 Members of FQSM march from Bustillos to Mendiola Bridge, during the 38th anniversary of the declaration of martial law. (Photo by Ronalyn V. Olea / bulatlat.com)

Up to now, the victims have not received any compensation from the government.

But majority of the House did not support the bill and raised different issues regarding its provisions. For one, they raised the point that the bill should not only focus on the victims of human-rights violations committed by Ferdinand Marcos but also victims of succeeding administrations as well. 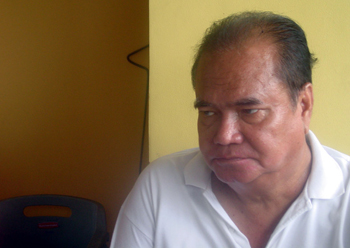 Ed Tablan, vice chairman of FQSM and one of the complainants in the class suit, continue to join the struggle for justice to victims of human-rights violations during martial law. (Photo by Anne Marxze D. Umil / bulatlat.com)

Opponents to the bill objected against the provision that automatically recognizes the complainants that won the class suit in Hawaii, arguing that there might be “fake complainants.”

“That is absurd,” said Bayan Muna Rep. Neri Colmenares. “Many of the victims agreed to the filing of the case only when it was decided that the suit would be filed in Hawaii because they did not trust the justice system here. Some even thought that what was being filed was a criminal case. And besides, why would a torture victim fake a complaint?”

Ocampo said during the 13th Congress, the Senate’s version of the bill was already approved. But when the counterpart bill at the Lower House was passed on third reading, then Ilocos Norte Rep. Imee Marcos objected saying that she was not present during the deliberations in the committee. The bill was remanded back to the committee where it was stuck.