MANILA – For the first time since he became president, Benigno S. Aquino III’s effigy was burned to the ground by thousands of students who gathered at Plaza Miranda in Manila. 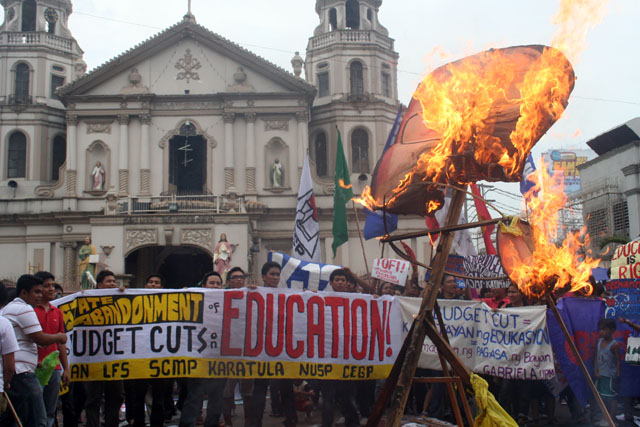 For the first time since Aquino became president, his effigy was burned to the ground. (Photo by Janess Ann J. Ellao / Bulatlat.com)

“The Filipino youth are angry. We are angry because of the budget cuts,” Kabataan Rep. Raymond Palatino said, referring to the budget cut on state universities and colleges (SUCs).

Meanwhile, the Maintenance Operating and Other Expenses (MOOE) of the Polytechnic University of the Philippines, the biggest state university with 20 campuses and a population of 65,000 students, will be slashed by P24 million. SUCs will receive no budget for Capital Outlay, which can be used to procure their much needed equipment and facilities. 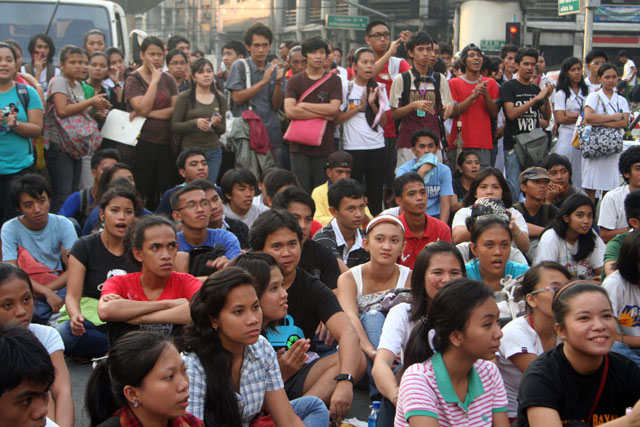 Students walked out from their classes on Sept. 24 to denounce Aquino’s budget cuts on education (Photo by Janess Ann J. Ellao / Bulatlat.com)

Thousands of students walked out from their classes on Friday, Sept. 24, to denounce the big budget cut on state colleges and universities for 2011. In Metro Manila, students from the UP, Philippine Normal University and the Polytechnic University of the Philippines led the walk out.

Private universities such as University of the East, University of Santo Tomas, Technological Institute of the Philippines, Jose Rizal University and Philippine School of Business Administration, and high School students from Culiat, Quirino, Ramon Magsaysay and Manila High School also participated in the walk out.

Students from other provinces such as in Ilocos Sur, Baguio-Benguet, Central Luzon, Southern Tagalog, Bicol, Cebu, Iloilo, Tacloban, Bacolod and Davao also walked out of their classes.

National Union of Students in the Philippines president Einstein Recedes said students will “bear the brunt of the cuts through its effects on tuition and other fee increases.”

In a statement, Budget secretary Florencio Abad said SUCs are still holding P19.1 billion in cash balances since 2009. “It means that SUCs still have funds that they can use for the mean time,” Abad said. (http://www.dbm.gov.ph/index.php?pid=3&nid=2074) 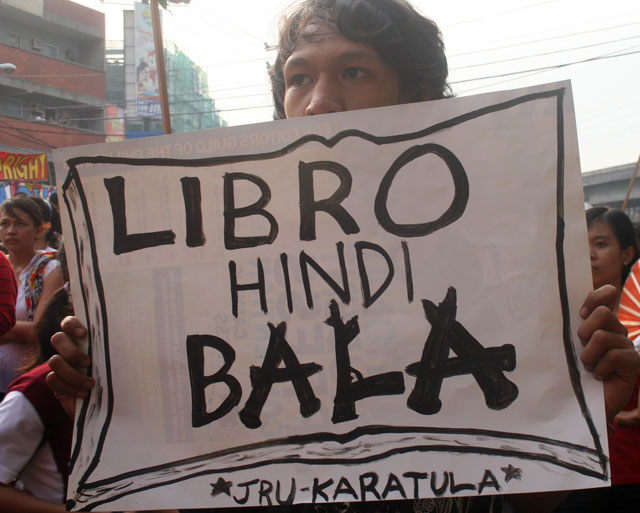 “Every Filipino youth should be studying if it is true that (SUCs) have money,” Vencer Crisostomo, Kabataan Partylist secretary general, said. He added that Abad should look into Aquino’s budget message before denying the budget cuts.

In Aquino’s budget message submitted before the 15th Congress on August 24, he said, “We are gradually reducing the subsidy to SUCs to push them toward becoming self-sufficient and financially independent, given their ability to raise their income and to utilize it for their programs and projects.”

The Department of Budget and Management said “with scarce public funds available, the government had to prioritize closing the resource gaps in basic education, among others.” However, there seems to be no scarcity for the Department of National Defense that will receive a big chunk of the 2011 budget with an increase from P96.2 billion to P104.7 billion.

The Armed Forces of the Philippines (AFP) will also get an additional P10 billion and the Philippine National Police (PNP) with P6.6 billion more.

Recedes of NUSP said the state subsidy on SUCs have decreased from 87.74 percent to 67.35 percent since 2000 up to present. “In the same period, the income generated by SUCs from tuition and other fees increased from P1.16 billion to P7.04 billion.

“Is this the straight path that the Aquino administration has been referring to?” UP Student Regent Cori Co asked. (Bulatlat.com)