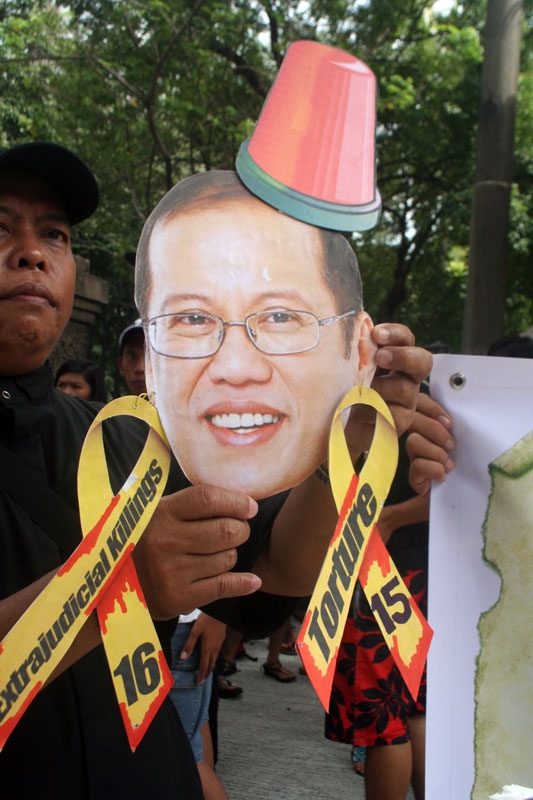 Bais said the Aquino government must implement fundamental reforms such as genuine land reform, justice for victims of rights abuses and the prosecution of Arroyo.

“He complains that because he is a bachelor he was not given a chance to have a honeymoon period. As far as women are concerned, even as Aquino is still at the courtship stage, he is already being rejected, “ said Lana Linaban, secretary general of Gabriela.

Linaban said instead of having a comprehensive plan to alleviate poverty, the Aquino administration is implementing a ‘misleading anti-poverty program’ such as conditional cash transfers (CCT). The program would cost P29.2 billion and is targeted to reach 2.3 million families by 2011. “He said the CCT is like a life vest that would take the poor to decent living. But this life vest would only take the poor into the quick sand of poverty.” She added that the CCT program would give P1,400 ($32) a month to select poor families but a family needs a minimum of P900 plus ( $20.75) a day to afford a decent meal. 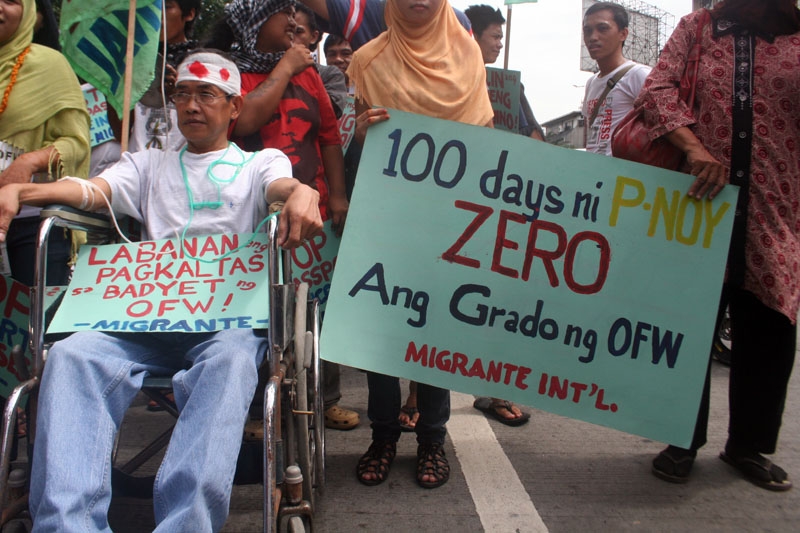 “The Aquino government made a deep slash in the funds for state colleges and universities, health and housing while the budget for foreign debt paymenst and national defense increased. This shows where the real concern of the government lies,” Gabriela also noted.

Vanessa Faye Bolibol, secretary general of National Union of Students in the Philippines (NUSP) responded to Aquino’s statement that the education budget would be increased. “The president claims that he is prioritizing education but his budget proposal aims to reduce subsidy to State Universities and Colleges. It took a lightning rally for the President to say something about the education budget. The report would have been an irrelevant piece of gimmickry and lies had it not been for the student protest that exposes the real issues of the Filipino people,” the NUSP said in a statement.

During Aquino’s Ulat sa bayan on his first 100 days held at the La Consolation College in Manila, four student leaders from the University of the Philippines-Manila stood up to protest the cut in the budget of SUCs.

Instead of answering directly the concern of the students, Aquino said the budget for the DepEd increased.

“Why don’t you try to be a student and enroll at the Polytechnic University of the Philippines and see for yourself how dilapidated the facilities are,” Bolibol challenged Aquino.

Continuation of the Policies of the Arroyo government

Aquino’s first 100 days signifies the continuation of the same anti-people policies of the previous administration, the groups said.

Dr. Ramon P. Paterno, member of Pagbabago and All UP Academic Employees Union said Aquino’s 100 days was more of a continuation of the Arroyo administration. “There were policies favoring foreign investors, the budget for defense was increased and privatization programs were implemented during the Arroyo government. Essentially, there has been no change under this new government.”

Gabriela added, “He puts a lot of hype in criticizing Arroyo but his administration’s neoliberal economic policy framework does not at all depart from the policies adhered to by his predecessor.” (Bulatlat.com)