BAGUIO CITY — At least three soldiers from the 41st Infantry Battalion Philippine Army of the Armed Forces of the Philippines were killed and three others were wounded in an ambush carried out by New People’s Army (NPA)-Abra guerillas on October 30 along the Abra-Kalinga Road in Abra, a province north of Manila.

According to wired reports released to the media, NPA fighters of the Agustin Begnalen Command (ABC-NPA-Abra) engaged the soldiers in a firefight at around 5:00 AM. The ambush site is just a few minutes away from the 503rd Brigade Headquarters located at Barbarit, and the Bacooc Patrol Base located in Lagangilang, as well as the Bituen Patrol Base and the Advance Command Post (ACP) of the 41st Ib which are located in Bakiro, Baay-Licuan. 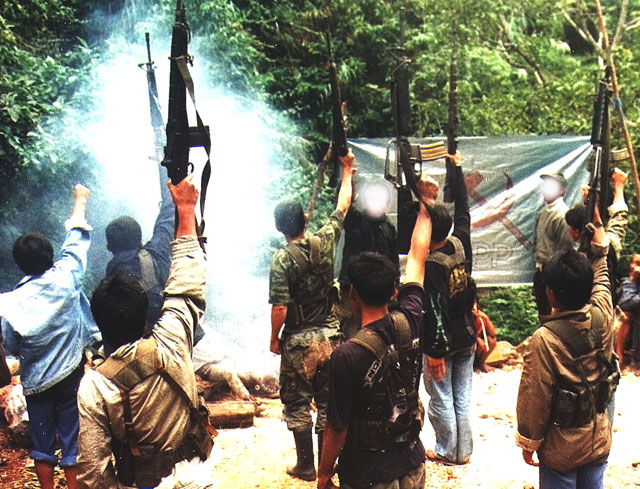 ABC-NPA in a statement said the ambush is “punishment” for the human rights violations committed by the 41st IB as it intensified its counter-insurgency operations under the Oplan Bantay Laya 2 (OBL 2).
“With their intensification of Internal Security Operations since 2008, the 41st IB have been conducting SOT campaign in the towns of Lacub, Malibcong, Baay-Licuan, and Sallapadan; it is also involved in joint operations with the 50th IB in Boliney and Tubo. Tinggian communities have been terrorized with indiscriminate bombings, machinegun strafing, illegal arrest and detention, torture, and murder.

Day-care centers, barangay halls and homes were used as barracks by 41st IB soldiers conducting SOT operations. Witch hunting are common, mobility and travel were restricted, and agricultural production and small scale mining were hampered. Womanizing, drunkenness, brawls and other forms of decadence and public disturbance abound where soldiers from the 41st IB operated,” ABC-NPA said in a statement.

The statement added that the 41st IB was also punished for “serving as security escorts and mouth of big mining companies.” According to ABC-NPA, the province of Abra is being prioritized in counter-insurgency operations because of mining interests in the province as announced by then Secretary of Defense Gilbert Teodoro in 2008.

After Teodoro’s announcement, ABC-NPA said the 41st IB immediately deployed troopers to areas where there are approved mining permits and pending mining applications. The municipalities of Tineg, Lacub, Baay-Licuan, Sallapadan, Daguioman, Malibcong, Tubo and Bucloc are covered by such approved mining permits and pending mining applicatons. The ABC said it is no wonder these are being heavily militarized.

To date, some 36 mining applications in Abra are filed at the office of the Mines and Geosciences Board – Department of Environment and Natural Resources (MGB-DENR). Mining companies like Rio Dorado, Olympus-Pacific, Sulfotara, Magdaleno/Miguel M.Peña, Abra Mining Industrial Company and the Cordillera Exploration Company Inc. (CEXI) have been issued mining permits by the MGB-DENR even with questionable process of getting the Free Prior and Informed Consent (FPIC) from the communities affected.

The ABC-NPA statement further said that the latest tactical offensive of the NPAs in Abra shows their heightened fighting will and capability. ABC said that it is a manifestation of the resolve of the revolutionary movement fighting alongside the Abra people “against plunderers and land grabbers” of their ancestral and agricultural land, and “against large-scale destroyers of the environment and human rights violators.”