You Are Here: Home → 2010 → November → 20 → Six Years Since the Hacienda Luisita Massacre, Six Years of Injustice

“Land reform is a question of social justice. It is at the heart of the conflict in Luisita.” – Renato Reyes of Bagong Alyansang Makabayan.

HACIENDA LUISITA, Tarlac – To date, no one has been held accountable for the November 16, 2004 massacre that claimed the lives of seven farm workers at the picket line of Hacienda Luisita’s Gate 1 over six years ago.

“This is characteristic of the justice system in this country. Come to think of it, has a member of the Armed Forces of the Philippines, the police and influential families ever been sent to jail?” Anakpawis Rep. Rafael Mariano told Bulatlat during the commemoration of the massacre last November 16.

More than 5,000 peasant workers of Hacienda Luisita went on strike on November 6, 2004, demanding the reinstatement of 327 farm workers who were laid off by the HLI management. Ten days later, an armed personnel carrier of the Armed Forces of the Philippines (AFP) rammed through the picket line, then soldiers, police officers, and reportedly some private security guards of the hacienda, fired at the strikers killing seven farm workers and residents of the Hacienda Luisita and wounding more than a hundred. Six more were reportedly killed but the bodies were never found. Union leaders could not identify them as they were seasonal workers, more commonly known as the ‘sacadas.’

The military claimed that the violence occurred because they were provoked by the striking farm workers. A report prepared by the Philippine National Police (PNP) claimed that the “initial burst of gunfire, single shots in succession, came from the ranks of the striking workers after they crossed the gate and invaded the CAT (Central Azucarera de Tarlac) compound.” 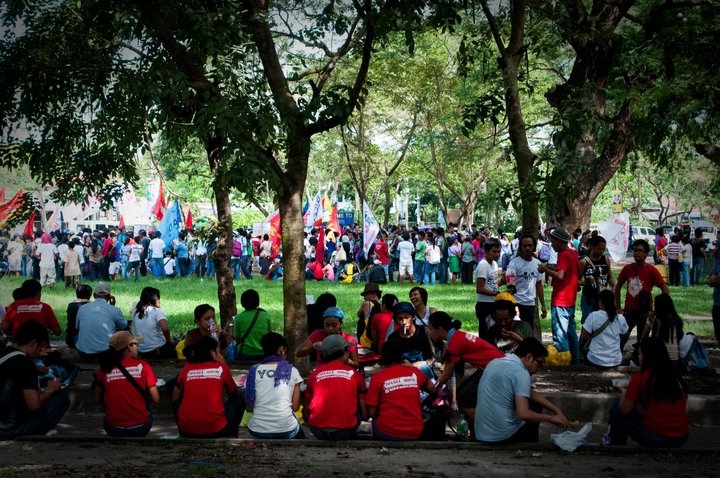 Contingents from Metro Manila having lunch at the Luisita Park, before continuing their caravan to HLI’s Gate 1(Photo by Ron de Vera / bulatlat.com)

Aquino, who was then the district representative of Tarlac, defended the dispersal, saying that the police and soldiers were “subjected to sniper fire coming from an adjacent barangay (village).”

The PNP’s report also claimed that there was evidence that “confirms the presence and participation of the NPA (New People’s Army) in the strike,” where 100 police and soldiers were allegedly injured. The NPA is the armed wing of the Communist Party of the Philippines. Mariano, however, doubts that the strike was infiltrated by the NPA, saying that this was just an excuse of the military and the Cojuanco-Aquino family to avoid being held accountable for the crime.

“How could a private property, which is heavily militarized, be infiltrated by the NPAs?” Mariano said, “No one would ever believe that.” 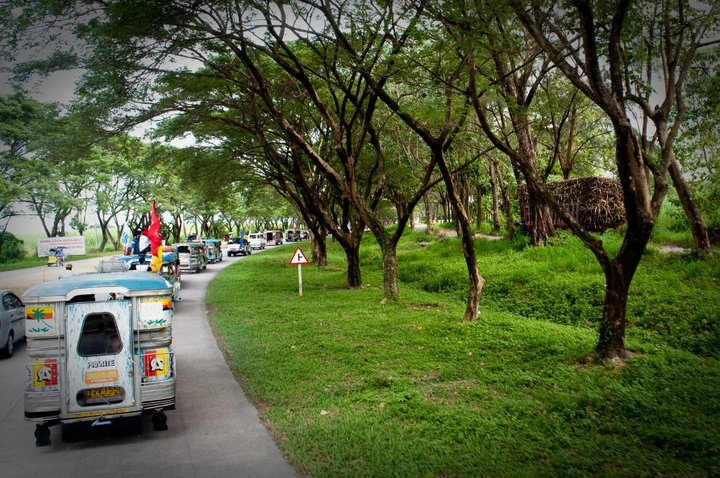 More than 40 vehicles participated in the caravan (Photo by Ron de Vera / bulatlat.com)

On January 13, 2005, the relatives of the seven victims and the survivors of the massacre filed criminal and administrative charges before the Office of the Ombudsman against the owners and managers of the hacienda and the sugar central, the police and military officers and labor officials. It is considered as the biggest number of complainants in a single case since the said government agency was formed.

Multiple frustrated murder, multiple attempted murder, serious and less serious physical injuries were filed for the wounding of at least 72 individuals, 27 of whom sustained gunshot wounds. They were also charged with theft and malicious mischief for stealing mobile phones, kitchenware and sacks of rice, among others.

The case, however, did not prosper. “The Office of the Ombudsman has sat on the case and no significant results have been achieved in the quest for justice for the seven who died at the picket lines,” Bayan secretary general Renato Reyes Jr. said in a statement. The only progress that was documented since the criminal and civil charges were filed before the Ombudsman was the dropping of the cases filed against the civilian respondents namely, Arroyo, Sto. Tomas and the members of the Cojuanco-Aquino family.

“I have tried to set aside my anger because we might end up losing our disposition. But every time I remember how justice is far from being served for the victims of the massacre, I could not help but be very angry,” United Luisita Workers’ Union acting president Lito Bais said.

Mariano believes that justice for the victims of the massacre would be more elusive than it ever was under the Aquino presidency. “If the Cojuanco-Aquino family managed to maneuver their way out of their culpability for the massacre at the time of Arroyo, with whom they had an alliance with, how much more now that it is their own kin who is holding the top position in the land?” Mariano said.

He added that they could not expect Aquino to send the perpetrators of the crime to jail as it also includes himself. But, Mariano added that whatever Aquino’s decision is, it would “serve as basis when the time has come for peasants to look into what he has done for their welfare.”

Reyes said the Aquino government’s attitude toward the long-standing agrarian dispute on Hacienda Luisita reflects his “general attitude toward land reform” as there has been “no clear policy pronouncement on land reform in any of the major speeches done by the president from the time he assumed power.”

“Land reform is a question of social justice. It is at the heart of the conflict in Luisita,” Reyes said. (Bulatlat.com)