You Are Here: Home → 2010 → December → 2 → Doctors, Lawyers Criticize Aquino for Refusing to Order the Release of Morong 43

Doctors, Lawyers Criticize Aquino for Refusing to Order the Release of Morong 43

“It is unbelievable that Aquino cannot do anything [on the case of the Morong 43],” Jose V. Cabrera, member of the board of governors of the Integrated Bar of the Philippines (IBP), said.

MANILA – Lawyers in barong tagalog and suits linked arms with doctors, nurses and health workers wearing white in a protest rally at the foot of Chino Roces (formerly Mendiola) bridge, Dec. 2. They criticized President Benigno S. Aquino III for his inaction on the case of the Morong 43 and reiterated their call for the release of the health workers.

The 43 health workers were arrested on Feb. 6 in Morong, Rizal by virtue of what lawyers describe as a defective search warrant. They were detained at Camp Capinpin in Tanay, Rizal for almost three months and charged with illegal possession of firearms and explosives. Five of the 43 remain under military custody while the 38 are now at civilian detention facilities at Camp Bagong Diwa in Taguig City. 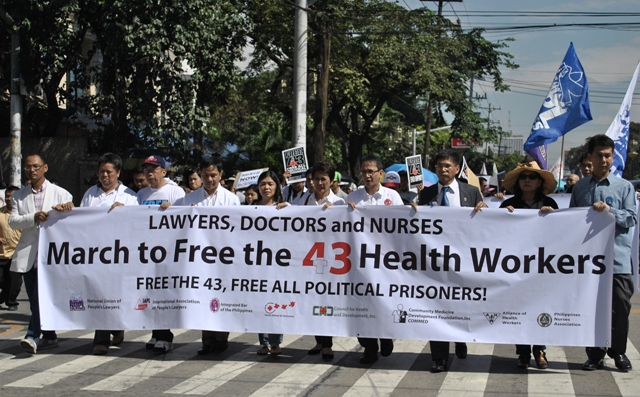 Justice Secretary Leila de Lima submitted her review and recommendations on the case of Morong 43 to the President in October. The contents of the review, however, were not divulged to the public. When asked by a reporter about de Lima’s review, Aquino said: “It [warrant] was for a different person…what was raided was not the person identified in the warrant nor the location. Their only similarity has to deal with being in the same barangay (village). So there really was a question in all the evidence [that was obtained] right away, I understand, there’s a concept in law called fruit of the poisonous tree — it can’t be used against the defendants.”

However, de Lima’s review was subjected to another review by the Palace legal team. In November, Senior Deputy Executive Secretary Jose Amorado submitted his office’s review and recommendations to Aquino. But Aquino said he will leave the case of the Morong 43 to the courts.

“It is unbelievable that Aquino cannot do anything [on the case of the Morong 43],” Jose V. Cabrera, member of the board of governors of the Integrated Bar of the Philippines (IBP) in an interview with Bulatlat. “I’ve been a lawyer for 20 years. They should not make a fool out of us,” Cabrera said. 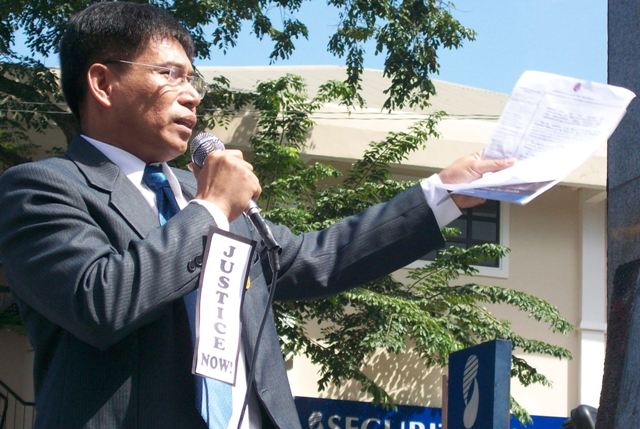 “It is unbelievable that Aquino cannot do anything [on the case of the Morong 43],” says Jose V. Cabrera, governor of the Integrated Bar of the Philippines. (Photo by Ronalyn V. Olea / bulatlat.com)

Cabrera explained that since the prosecution is handled by the Department of Justice (DOJ), the President can ask the prosecutors to withdraw the case. “The court would not have any choice but to dismiss the case,” he said.

Asked to comment on Amorado’s statement that such move may not guarantee the dismissal of the case, Cabrera said: “That’s not true. Before they pass the blame on the local courts, the prosecutors should first do their part.”

In a resolution, the IBP urged the DOJ and the courts to drop the charges against the Morong 43. The group also ‘demanded accountability from the Armed Forces of the Philippines (AFP) for the detention and classification of the Morong 43 as subversives meant to undermine national security and peace.’

“This case is an insult to the AFP. Are they saying that those faces [pointing to the pictures of the Morong 43] are bomb-makers?” Cabrera said.

Aquino, Afraid of the Military? 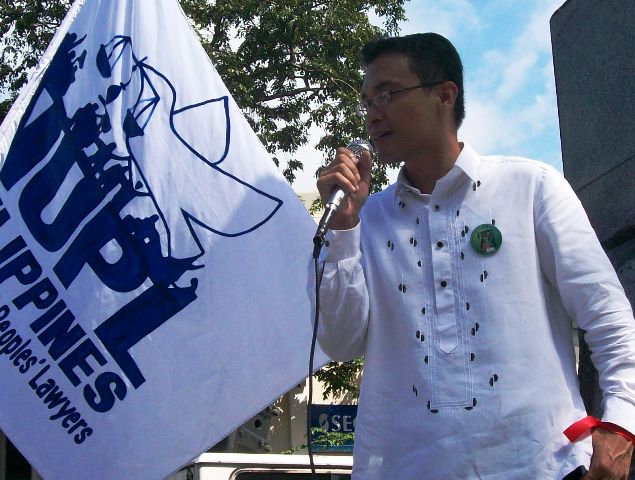 “I ask Aquino, are you afraid of the military that is why you could not withdraw the case against the 43? Are you afraid of a situation that was faced by your mother?” Julius G. Matibag, one of the legal counsels of the Morong 43, said in his speech.

“You should be more afraid of the people’s wrath,” Matibag told Aquino in Filipino. “You should be afraid now that the doctors and lawyers are no longer inside hospitals and courtrooms but here, joining the rally.”

Matibag said that on Dec. 10, International Human Rights Day, Aquino will have the chance to free the 43 health workers. “If he would not do it, then this government is no different from the Gloria Macapagal-Arroyo regime.”