EASTERN MINDANAO — The Communist Party of the Philippines (CPP) held what it called its grandest anniversary celebration ever somewhere in the Caraga region on Dec. 26, marking its 42 years of existence.

Jorge Madlos, also known as Ka Oris, spokesman of the CPP-led National Democratic Front of the Philippines in Mindanao, said that at least 8,000 individuals from four regions in Mindanao attended the event. About 30 large vehicles brought peasants, workers, students, religious, lawyers and the media to the event that threaded through several military and police checkpoints to reach the venue — a mere kilometer away from the provincial highway.

“Checkpoints were setup by the 4th Infantry Division all over the Caraga region in a desperate attempt by the AFP to prevent the people from joining the celebrations of the CPP anniversary,” said Ka Oris. 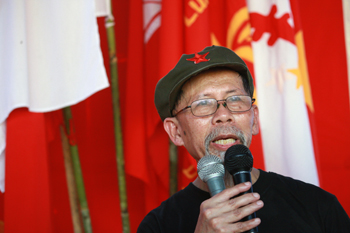 According to a press release sent by NDF-Mindanao, traffic built up to around two kilometers along the main highway leading to San Agustin town, Surigao del Sur, because of the checkpoints set up by military and police operatives. “The military and police unreasonably blocked the people’s free movement insisting on listing all the license numbers of vehicles, asking for registration papers and checking the license of drivers,” Ka Oris said.

The vehicles were only allowed to proceed when reporters and cameramen from local and international media outfits arrived, said Ka Oris. “The attempts to stop people from joining the celebrations of the CPP violated the spirit and intent of the simultaneous ceasefire which, among others, was meant to allow personnel of both sides to be with their families and friends to hold celebrations during the holidays,” added Ka Oris.

Despite the harassments at the checkpoints, the participants to the celebration were able to proceed to the venue. 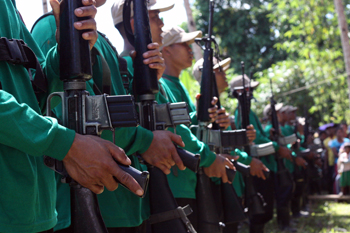 The Communist Party of the Philippines held its grandest anniversary celebration ever on December 26. (Photo by Raymund B. Villanueva / Kodao Productions / bulatlat.com)

From about nine in the morning, the crowd freely mingled with at least two full companies of New People’s Army (NPA) fighters and having their pictures taken with the uniformed guerillas armed with high-powered assault and sniper rifles. Children were carried on their parents’ shoulders to get a clear view of the speakers and the performers on the elevated stage while several “kitchen teams” were preparing lunch under tents, evoking a town fiesta atmosphere. Makeshift toilets around the main venue were also constructed in anticipation of the huge crowd even as surrounding houses opened their doors to strangers in search of other toilets.

A pass-in-review by an NPA company -– three platoons of 25 fighters each — at the beginning of the program had the crowd surging forward to be as close to the rebels, some with colorfully painted faces in preparation for their own “cultural performances” later in the program.

In his speech, Ka Oris congratulated the CPP as it established three new guerilla fronts in Mindanao from last year’s 39. He said that each front has platoon or company-sized rebel formations on top of “people’s militias.”

The rebel spokesman also announced that the NPA launched 250 tactical offensives in 2010, seizing about 200 high-powered firearms from government troops and achieving a “casualty ratio” of 10 government soldiers for every rebel killed in action.

“Instead of being decimated by OBL 1, the whole revolutionary movement has grown bigger and stronger. OBL 2 failed not only in reducing the revolutionary forces to inconsequentiality but in stopping the continued advance of the people’s war,” he said.