Alain de Botton: The Consolations of Philosophy and the Art in Everyday Existence

Daily we grow weary trying to cope with the demands and expectations of the world. For some of us, work has become more than a means to earn and hence to survive; it has become a definition, meaning the kind of work you perform speaks much about you. It doesn’t matter if it’s manual labor or mental work: when you compare yourself to your fellows and colleagues and how they have been faring, you can get a gauge of your own relative status. The question that arises then is this: Are you satisfied with it or not? If you’re not, what do you do about it?

De Botton offers oblique criticism against the concept of status as a gauge for what is admirable or ideal: society puts too much stress on the accumulation of wealth when the ugly truth is that this very same pursuit of material gain is precisely what makes the world vicious and ugly. He tactfully but pointedly instructs the reader to assess his standards of what makes success; what defines meaning purpose; and, inevitably, what constitutes happiness.

Status, he says, is granted or imposed by society, and we all know that society is controlled by a ruling class. He then goes on to quote Marx who laid down that the ruling class is largely responsible for disseminating beliefs, many of them illogical and unjust. If the often foolish and irrational standards used to determine what is high status as opposed to low status are done away with, it is the ruling classes who deserve to be labeled “low.” Why? Because its members feed off the labor and sacrifice of those below them in economic stature. An ideal conferment of status as a measurement of what is admirable would be to accord the highest title to the working people because it is actually through their toil that the world revolves.

In the end, the values that one embraces are reflected if he conducts himself in all arenas of life, be it work or friendship, romantic relationships and advocacies. The worries and anxieties are also colored by what one holds important: if you think that being fashionable is important, it will cause you anxiety to be seen wearing last season’s shoes. If you believe that public health and nutrition are important, you will be angry to find out that your government has slashed allocations for services for public hospitals while increasing provisions for military expenditures. Status anxiety is only as great or important as how you see your own worth to be granting that you are aware of what are truly important in life. 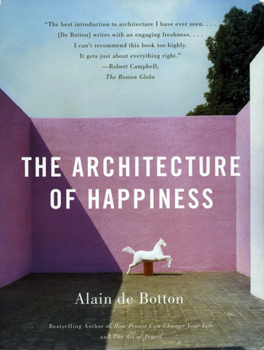 The Architecture of Happiness (2006)

In this book, de Botton guides us through the history of various cultures and the art they created when it came to physical structures and monuments. He presents the varying and sometimes conflicting schools of thought when it came to architecture and what makes a building beautiful, impressive or, quite simply, appealing.

As he has been wont to do in all of his books, de Botton gives his insight into the human condition, this time by using architecture. As an expression of the self and the prevalent beliefs of the times, what could be more telling than a building erected to the specifications set not only by the laws of engineering or physics but the personal ideals of the architect and/or his client?

People have altered the environment to suit their whims and needs, and the birth and popularization of of various architectural philosophies throughout the centuries are a reflection of the same. Citing various famous landmarks and not-so-known buildings all over the world, de Botton explains that it is our natural inclination to surround ourselves with what will either reflect what we want of ourselves (our ambitions, hopes and dreams), or what will make us comfortable and feel “at home.” For instance, a museum cannot be anyone’s house, but one can still feel at home surrounded by objects and works of art that inspire or agitate. The skylight, the empty spaces, the way the floor meets the walls and proceeds to guide you toward the stairs or a hidden recess, they can all contribute to how we feel at any given moment.

The value of this book is how, after reading it, one is compelled to look to one’s surroundings and see everything in a different way. The architectural construction of office buildings, banks, military bases, churches, hotels, schools — all of it makes a comment about their occupants and visitors, and on the whole contributes to a general image of the society it all belongs to. Again, the values we hold dear are determinant in how we construct our abodes and other physical structures. For instance, a society that considers education important will take pains to construct a physical environment of buildings and elements that are conducive to learning: large classrooms with good ventilation and lighting; comfortable bathrooms, flood-proof stairwells, etc. Beauty is not only in appearance but, more important, in form and utility.

Architecture can also be a telling sign of hypocrisy or twisted priorities in a society: imagine fast-tracking the beautification of public parks ahead of building public housing facilities for thousands of homeless people. 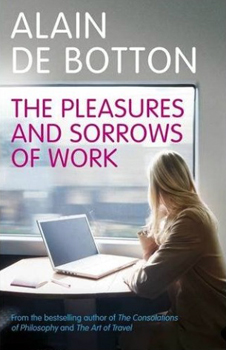 The Pleasures and Sorrows of Work (2009)

This, by far, is the most impressive of de Botton’s books. Here he leaves behind books and historical learning and goes out into the world to speak to and learn from actual living people and their experiences in their respective workplaces.

In this book, de Botton observes and describes people and their work, ranging from biscuit manufacturing, rocket launching, career counseling, painting, accountancy, aviation, and the logistics of procuring tuna tuna for the dining table.

In the last, he traces the origins of a vacuum-sealed pack of tuna to the seas in the Maldives. Through a series of captioned pictures, de Botton tells how he joined a team of fishermen, rode their boat and suffered through bouts of intestinal inflammation.

After witnessing the fishermen make a successful haul, he proceeded to the fish processing plant with ties to British importers and supermarkets. He watched the workers fillet the tuna, then the machines as they packed, sealed and labeled the fillets. After this, he went on to follow the shipment of fish as it boarded a plane toward England (the fish was in the cargo hold, while de Botton secured a seat in Economy). The shipment is unloaded in Heathrow, where de Botton finds supermarket merchandisers waiting. Eventually, the fillets are sold, and a pack ends up in the kitchen of a middle-class family. The fish, de Botton discovers, is for a young boy’s dinner. He sits with the boy and speaks to him over the meal which the boy Sam eats, even as he, Sam, proclaims that he hates tuna.

All throughout the book, de Botton expresses a wistful hope that we might gain a healthier respect for the working people if we understood better the nature of their work and the difficulties they experience in the conduct of their tasks.

In the process of learning and understanding, we also open ourselves to the possibility of being amazed at how far humanity has gone as a species when it comes to technological advancement even as we rue the backwardness of many of our traditions, values and beliefs, and how we relate to one another. The value we attach to certain pursuits can be seen as mislaid, and our own goals sometimes shallow when seen in the larger context of how the world works, or rather, how it is run.

Given this, work is more than a means of attaining a living when you think of the long hours we commit to it: it can become a means by which we can define ourselves. Far from considering manual labor as inferior to mental work, de Botton calls on the righteousness of being proud in one’s honest labor and its contribution to the social machinery. If we do our work well, no matter how menial it is, we should hold our head high.

For the most part, Alain de Botton’s books receive positive reviews. Some criticize his tendency to be pedantic, or the sometimes too obvious effort to be clever; but on the whole, it’s never a waste of time to read him. One could certainly do much worse than spend an afternoon in the company of de Botton and the philosophers.