Apart from ‘Shocking’ 300% Toll-Fee Hike, Philippines Has to Account for Dramatic Jump in SLEX Project Cost

From an initial P4 billion in 2006, the cost of expanding and improving the South Luzon Expressway jumped dramatically to P12.5 billion by last year. This is being used to justify the increase in toll fees – an imposition that many view as not only patently anti-poor but the result as well of “evident corruption.”

Last January 7, anti-corruption advocate and lawyer Ernesto Francisco filed a formal request for investigation with the Office of the Ombudsman on the issue of the 300-percent toll hike at the South Luzon Expressway (SLEX). According to Francisco, the South Luzon Toll Corp., which operates the expressway, is using the multibillion project cost for the expansion and improvement of the expressway as a reason for raising toll fees. The projected cost is the primary basis for the 300-percent toll hike.

Sidebar
Aquino Disappoints on Toll Hike but That’s Not a Surprise
“I see nothing wrong if President Aquino wants to honor the Philippine government’s commitments to foreign investors, but what about his commitments to the Filipino people?” lawyer Ernesto Francisco asks.
Read the full story

Click here for more stories on the toll-fee increases

Francisco said that that the South Luzon Toll Corp., the SLEX investor Malaysian company MTD Capital Berhad and the Toll Regulatory Board, which allowed the toll-fee increase, should be compelled to explain why the project cost ballooned to P12.5 billion from a much smaller P5.88 billion a few years ago. He said the massive increase should not have been allowed without a review by the Department of Public Works and Highways and the Commission on Audit.

The Toll Regulatory Board is the agency that regulates all toll roads in the Philippines. It was created via Presidential Decree No. 1112 or the Toll Operation Decree, and has regulatory authority over all toll facilities in the country. According to its charter, it is authorized to enter into contracts on behalf of the government, with qualified persons, natural or juridical, for the construction, operation and maintenance of toll facilities. It exercises jurisdiction over the toll facilities of the North Luzon Expressway (NLEX); the SLEX,; the Manila-Cavite Expressway (Coastal Road);  the South Metro Manila Skyway (Skyway); the Southern Tagalog Arterial Road (Star Tollway); and the Subic-Clark-Tarlac Expressway (SCTEX). 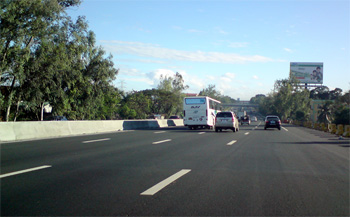 According to Francisco, the Office of the Ombudsman should immediately investigate whether or not the Toll Regulatory Board and the South Luzon Toll Corp. complied with the provisions of Letter of Instructions No. 579, which states that all plans and specifications for any proposed extension projects of the Manila North and/or Manila South Expressways be first subject to the review and approval of the the Department of Public Works and Highways before the Toll Regulatory Board decides to recommend or not to the president the construction of such a project.

If proven that the Toll Regulatory Board failed to follow such procedures, its officials should be held accountable under the country’s anti-corruption laws, Francisco told Bulatlat.com in an interview. He cited a law that orders the Ombudsman to investigate and prosecute complaints of any wrongdoing on the part of any agency or official involving public funds or properties, and on matters of error in the application or interpretation of laws, rules or regulations.

Francisco said that the need for prior audit and validation by the Commission on Audit is made highly imperative by the doubling of the SLEX project cost.  In March 2006, former President Gloria Macapagal-Arroyo launched the rehabilitation and upgrading of the SLEX, which was touted to be her administration’s priority infrastructure projects.

“Back then, Malacañang said that the expansion projects would cost P4.42 billion,” Francisco explained.

Fast forward to December 2010 and to the present. The South Luzon Toll Corp. claims that the validated cost for the same project is P12.4 billion, while the Toll Regulatory Board says it is P10.8 billion. Both amounts are way higher than the P4.42 billion announced in 2006.

“Between then and now, how did the project cost increase? It’s a mystery,” Francisco said.

The anti-corruption lawyer has also unearthed a 2006 disclosure from the South Luzon Toll Corp.’s parent company, MTD Capital Berhad, saying that the South Luzon Toll Corp. has entered into a “supplemental toll operation agreement” with the Philippine government through the Toll Regulatory Board, the Philippine National Construction Corporation  and the Manila Toll Expressway Systems Inc. MTD Capital Berhad described the scope of the project as covering four project toll roads from Alabang, Muntinlupa City, to Lucena City, Quezon, and the total project cost was approximately P8.5 billion.

“Based on this disclosure from the MTD to Bursa Malaysia (then known as the Kuala Lumpur Stock Exchange), it should only cost P8.5 B to develop the four toll roads of the SLEX. The South Luzon Toll Corp. and the Toll Regulatory Board initially explained the massive increase in project cost by saying that expenses increased in the course of the construction. Beyond this, neither the South Luzon Toll Corp. nor the Toll Regulatory Board have offered any stronger or believable reason to explain how, between May 2006 and December 2010, the project cost doubled,” Francisco said.