MANILA – There is hope that the proposed fare hikes of Manila’s two rail networks, MRT and LRT, can still be averted.

And all it takes is for the public, mostly poor Filipinos who would be affected, to register their opposition to the increases, said Sammy Malunes, spokesman of the Riles Network, an alliance of progressive peoples’ organizations that believe that “the railways should be for the people.” 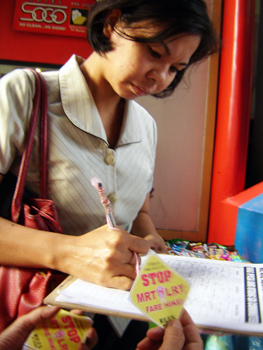 A commuter signs the petition against the MRT fare hike during the Riles Network’s protest action at the MRT North Avenue Station on Wednesday. (Photo by Marya Salamat / bulatlat.com)

The government recently approved a “provisional” 50-percent to 100-percent hike in MRT and LRT fares, which will take effect on March 1. But as protests against the increases have spurred the formation of another consumers’ alliance vowing to hold more protest actions at the MRT and LRT stations, the transportation department said the “provisional” fare hike will still be tackled in public consultations.

Based on what the government has initially approved, starting March the MRT and LRT lines would be charging a boarding fee of P11.00. The government will also simplify the current fare matrix into three denominations of P15, P20 and P30, effectively hiking the fares by 50 percent to 100 percent. Four kilometers will now cost P15.00 while five to nine kilometers will cost P20.00. End-to-end trips may cost as much as P30.00 or twice the present fare.

“The increase is so huge  the DOTC should not implement it even on a provisional basis,” said Bayan secretary-general Renato M. Reyes Jr. in a statement. “They are doing this sans any public hearing, without any transparency and without any regard for public welfare.”

He added that an increase of this magnitude “will have far-reaching effects on the pockets of some 1.2 million combined LRT and MRT commuters.”

Last week even Senator Francis Escudero has echoed the protesters’ claims that the government needs only to “get its rightful share from the non-rail revenues” to subsidize fares and abort the fare hike. 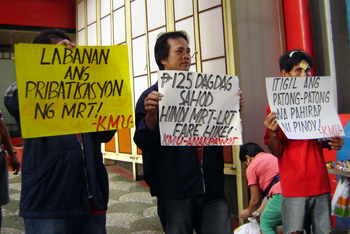 Members of the Riles Network and the Kilusang Mayo Uno hold a protest action at the MRT North Avenue Station on Wednesday to denounce the fare hike. (Photo by Marya Salamat / bulatlat.com)

Also, the hikes announced by the government “should not be implemented at all given the people’s meager salaries and the fact that it is the government’s responsibility to provide the people with safe, efficient and affordable mass transportation,” Malunes said.

“In its haste to pay off onerous debts, (the) government has chosen to burden consumers instead of finding ways to rectify previous wrongs. Train systems perform a valuable public service and to some extent it is acceptable that they lose money. This has been the case for many passenger train systems throughout the world. They require government subsidy because of the important public function they perform,” Bayan’s Reyes said.

In a Japan Bank for International Cooperation (JBIC) study in 2007 cited by Sen. Escudero, it was revealed that non-rail revenue can improve by increasing the rates of advertisements on the trains and in the stations as well as the fees for tenants in the stations so that commuters’ fare will not sharply increase.

Instead of hiking the fare rates, the government can act on reports that it is losing out to private contractors as its share in the LRT’s non-rail revenue is “only a measly 2.6 percent of the total earnings.” Meanwhile, in neighboring countries, governments get a 20% share from non-rail revenue collection.

“The government is saying that the MRT is losing money and that it is heavily indebted. This should not have been the case had the original contracts not contained provisions that guaranteed private debts and made government assume commercial risks of the MRT operations,” Reyes of Bayan said.

The original MRT contract made government guarantee the private contractors a 15-percent yearly return on investment.

“The original contract was grossly disadvantageous to government and the taxpayers. We are now being made to shoulder the burden of the original flawed contract. This is clearly an injustice,” Reyes said.

The protests “are just the beginning of what would be left and right protest actions against the fare hike,” the Riles Network warned. Indeed, on Thursday Piston held a protest-caravan from Quezon City to Mendiola in Manila denouncing not only the “provisional” rail fare hikes but also the hikes in oil prices and toll fees. Other members of Riles Network from Courage, a government employees’ confederation, also protested the looming fare hike near an LRT station in Caloocan.

A newly formed price watch, called Strike the Hike Movement, also announced Thursday its response to the upcoming increase in fares of the MRT and LRT.

‘We are enraged upon hearing the moves of the government to pass the burdens of investment debts to the public,” said Mark Louie Aquino, convenor of Strike the Hike Movement. “We are preparing to gather thousands of consumers’ signatures against these hikes. And we will conduct protests after protests in public centers, especially in the LRT/MRT stations, to encourage the public to participate in the strike that we are launching: the consumers’ strike. It is the strike that everyone needs to participate in because everyone is affected.”