“Instead of wasting taxpayers’ money on proposals to amend the charter, legislators should heed the Filipino farmers’ demands for the repeal of Republic Act 9700 or the Comprehensive Agrarian Reform Program Extension with ‘Reforms’ (CARPer)” -– Kilusang Magbubukid ng Pilipinas

MANILA — Coming close at the heels of reports that the Aquino administration might consider options to amend the 1987 Constitution, more than 50 farmers held a protest action in front of the House of Representatives in Quezon City, saying a firm ‘No’ to charter change.

Recently, former Chief Justice Reynato Puno said that the start of a new administration is the “perfect time” to amend the 1987 Constitution. Malacañang has already declared, however, that charter change was not its priority.

“This is a resolution that shouldn’t even be discussed. All other proposals to amend the charter should also be junked. There are so many more important, pressing concerns that congress –and the national government for that matter – should attend to.”

Group spokesperson Antonio Flores denounced moves to amend the charter, saying that the proposed changes will comprise the blueprint to the systematic conversion of the country’s prime agricultural lands. He said amending the constitution at this juncture will favor foreign monopolies, which are on the lookout to take over vast tracts of agricultural land to exploit for super-profits.

“These foreign big businesses collude with local big landlords and compradors in exploiting the land and displacing thousands of small farmers and their families,” he said. “This is a resolution that shouldn’t even be discussed. All other proposals to amend the charter should also be junked. 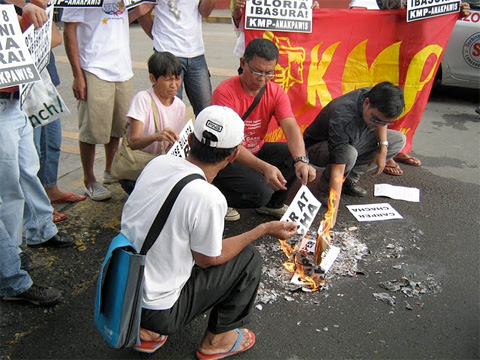 Members and leaders of the KMP protesting in front of Congress on Tuesday. (Photo by Ina Alleco R. Silvero / bulatlat.com)

The KMP has previously pointed out that there was no doubting what was in store for farmers if the constitution is amended. It said existing development programs in the country are already geared towards allowing 100 percent foreign ownership of land. The CALABARZON project in Southern Tagalog, Metro-Luzon Urban Beltway (MLUB) and Subic in Central Luzon, Aurora Pacific Eco Zon (APECO), Cagayan Economic Zone (CEZA) project and similar programs are patterned toward allowing foreign investors to fully own land in the Philippines.

Allowing complete foreign ownership of local land, the group said, would lead to unrestricted abuse of the country’s natural resources, not to mention the greater exploitation of the labor force.

“The Aquino government has already jumpstarted the sale of our country’s resources, government facilities and public infrastructure through the Public-Private Partnership scheme; there’s a basis for concerns that it might only be a matter of time before he pushes for charter change. In any case, instead of trying to revive the dead which is what this Chacha issue is, our happy-go-lucky president should prove his stand against it by instructing House Speaker Belmonte to immediately shoot down Arroyo’s House Resolution 8,” Flores said.

Flores said Congress should stop wasting its time on useless and patently anti-people proposals and legislation. He said instead of wasting taxpayers’ money on proposals to amend the charter, legislators should heed the Filipino farmers’ demands for the repeal of Republic Act 9700 or the Comprehensive Agrarian Reform Program Extension with ‘Reforms’ (CARPer).

“Carper is nothing but an instrument of landlords to legalize landgrabbing and land use conversion, and to justify the brutal displacement of farmers. It’s worse than CARP– it strengthened the already abusive rights of landlords, while further weakening the already compromised rights of farmers. In the Carper, farmers are considered tenants, living under the thumb of landlords. Its implementation based on the accomplishment of per-land size category is also an impossible measure as agrarian cases take years to be resolved. Larger tracts of land would never be covered in its five-year implementation,” he scoffed.

Based on KMP’s reckoning, during the first year of Carper’s implementation, only 64,329 out of the 163,014 hectares targeted for land distribution were processed and the bulk 41,000 hectares were placed under the Voluntary Offer to Sell (VOS) category. A negligible 1,777 hectares were put under Compulsory Acquisition (CA). The group said landlords were hell bent on exploiting the provisions of the law that authorizes them to dictate the value of their lands. Carper, the group said, was landlords’ milking cow.

“Both Carper and Chacha are against the interest of farmers and the rest of the Filipino people. CARPer serves big landlords by giving them authority to take over more land, cancel Certificate of Land Ownership Awards, secure exemptions and Land Use Conversion rights. Charter change, in the meantime, will allow 100 percent foreign ownership of land, a bigger threat against all the economic welfare and future of Filipinos, and a serious blow against national sovereignty and patrimony, he insisted.

In recent years, the World Bank has blatantly asked the Philippine government for the removal of constitutional restrictions on foreign ownership of land. The same was echoed by US and Japanese investors in country. They claim that constitutional restrictions had adversely affected the entry of foreign investments in the country. The European Union has made a similar demand, saying that its nationals and business clients would be more encouraged to invest in the Philippines if the land ownership restriction was removed.

The group marked their protest by burning placards representing the Carper and proposals for charter change. Flores said farmers are not letting down their guard against either and will continue to lobby for the immediate junking of both.